Ron Watkins, one of the heads of a far-right message board site known for hosting the account behind the QAnon conspiracy theory, is now trying to spread false conspiracy theories about the 2020 presidential election, and his claims have been promoted by President Donald Trump himself. His father, Jim Watkins, who has actively exploited QAnon as the owner of the site 8kun, appears to be trying to capitalize on his son's newfound popularity to promote the site as well.

8kun is an anonymous message board site previously known as 8chan that was founded to allow for more user freedom than fellow far-right message board site 4chan supposedly provided. The site first became popular back in 2014 due to "Gamergate," a misogynistic harassment campaign against women in gaming. In 2019, the site was knocked offline for months for hosting the manifestos of multiple alleged white nationalist shooters, later relaunching as 8kun.

8chan/8kun has also been the main hub for the QAnon conspiracy theory, which has been tied to multiple violent acts and labeled by the FBI as a potential domestic terrorist threat, with "Q," the conspiracy theory's central figure, posting on the site. (8chan founder Frederick Brennan has also alleged that "Q" has corresponded with both Jim and Ron Watkins, who he said assist "Q" in order to keep it on their site.)

Ron Watkins -- who lives in Japan and served as 8kun's administrator, though he claimed last fall that he had resigned -- has used Twitter since the election to relentlessly push voter fraud conspiracy theories, the false claim that voting machine company Dominion Voting Systems created and stole votes for President-elect Joe Biden. As part of this campaign, he has encouraged his followers to harass Dominion facilities in Georgia and teamed up with a QAnon influencer to post video he falsely claimed showed wrongdoing by a Dominion employee. The video caused people to send death threats to the employee. He also helped spread a QAnon-connected hashtag urging Trump to overturn the election via martial law.

As Ron Watkins has pushed these claims and seen his Twitter follower numbers grow extensively, others have also given him a platform. Pro-Trump outlet One America News Network has featured him as a "technical analyst" to share false information about Dominion. Lin Wood, a QAnon-supporting attorney who has aided Trump's campaign, has claimed his "IT experts" have spoken with Ron Watkins about his Dominion claims. He called Watkins a "truth-giver."

Sidney Powell, another attorney with QAnon connections who has worked with the Trump campaign's legal effort, submitted an affidavit from Ron Watkins to push his Dominion claims as part of her election lawsuits. She also gave the court an affidavit from a QAnon supporter who participated in Watkins' harassment effort targeting Dominion. 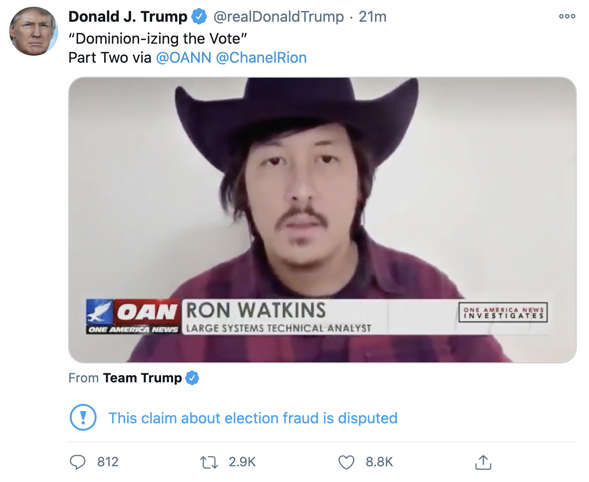 Meanwhile, Ron's father appears to see a business opportunity in his son's recent fame as a voter fraud conspiracy theorist. Jim Watkins in early January promoted a new Ron Watkins T-shirt featuring his Twitter handle and the 8kun logo. It was on a merchandise site Jim Watkins is apparently involved with that sells QAnon and 8kun items. 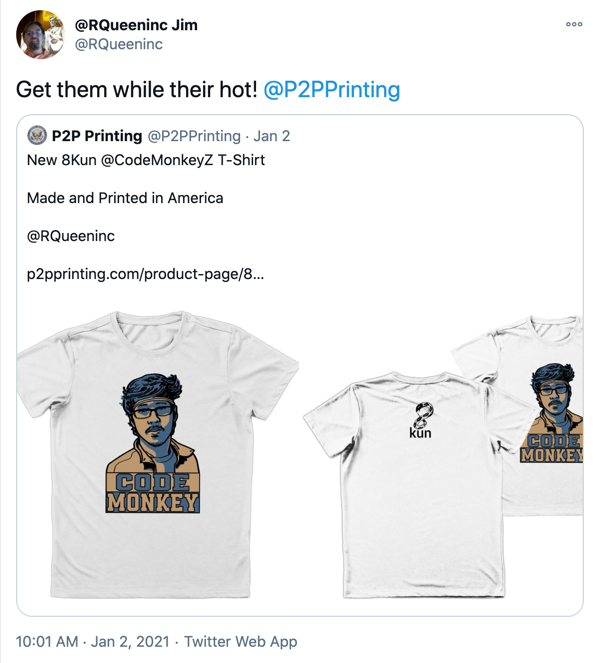 This isn't the first time Jim Watkins has tried to grift off conspiracy theories and harassment campaigns. Besides hosting a message board dedicated to "Q" on his site, he has also been an active participant in the conspiracy theory -- wearing a "Q" pin, attending QAnon events, and co-founding a QAnon super PAC that has run paid ads on 8kun. Jim Watkins also has a business relationship with the hosting company for QAnon aggregator sites that give 8kun most of its traffic. (Jim Watkins also runs a company hosting apparent child pornography domains, while 8chan/8kun users have shared child pornography on the site.)

And now QAnon has allowed the Watkinses to capitalize on their infamy to promote voter fraud conspiracy theories and exploit misinformation for their own gain.

From Your Site Articles
Related Articles Around the Web
QAnon

Senator Susan Collins (R-ME) is under mounting criticism for refusing to support a Democratic bill that would make access to abortion the law of the land, as the U.S. Supreme Court, experts believe, prepares to reverse its historic 1973 ruling in Roe v. Wade.

Senator Collins, who repeatedly claims to be pro-choice, is being criticized after years of supporting then-President Donald Trump's judicial nominees at every level of the federal judiciary, including two of his three Supreme Court picks.

Reprinted with permission from Creators

About France and its submarines: Australia's decision to cancel a $60 billion contract to buy them and purchase American nuclear subs instead had to hurt. In response, France's foreign minister called the U.S.-backed move a "stab in the back," and President Emmanuel Macron recalled his ambassadors from both Washington and Canberra.

The backstory should take precedence over the drama flowing from the rift between America and its oldest ally. It centers on a growing alarm at Chinese aggression in the Pacific and how seriously the U.S. and its Pacific allies are taking it.

Subpoenas Fly Out To Bannon, Meadows From House Panel On January 6