Photo by World Travel & Tourism Council is licensed under CC BY 2.0

A poll released this weekend by the progressive strategy firm Data for Progress found the American public did not buy into a relentless propaganda campaign from right-wing media, which attempted to blame the Texas blackouts on renewable energy sources.

Instead, the public understood the reality of what went on: All power sources in the state had failed, including the state's primary fossil fuels.

The poll asked respondents which of the following options caused the power outages in Texas:

In response, 64 percent of surveyed people correctly picked the first option, compared to only 28 percent who thought that Texas had over-invested itself in wind turbines. Even 50 percent of self-identified Republicans chose the correct answer, while 41 percent blamed renewable energy. The poll was conducted from February 19 to 22, surveying likely voters nationally via web panels. 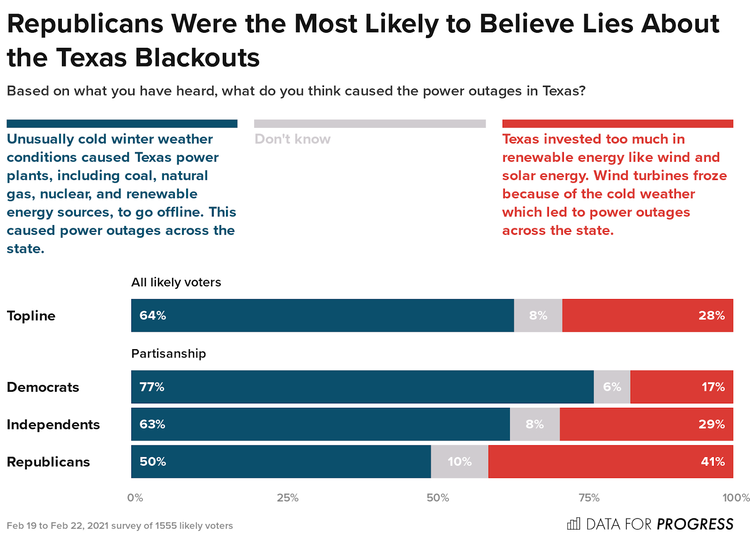 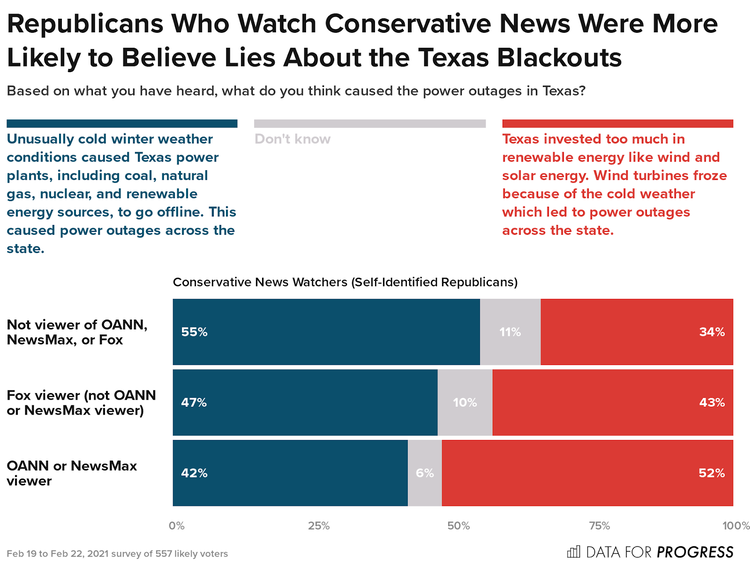 An earlier Media Matters study had found that Fox programming lied 128 times over less than 48 hours, falsely attributing the power outages to failures in renewable energy sources such as wind turbines.

For example, Texas Republican Gov. Greg Abbott told Fox host Sean Hannity that his state's catastrophe "shows how the Green New Deal would be a deadly deal for the United States of America." (Of course, the Green New Deal is not currently the law in Texas.) Meanwhile, Abbott had admitted in other settings that the state's natural gas and coal infrastructure had also frozen over.

Other right-wing media outlets pushing this campaign included Fox's corporate cousin The Wall Street Journal and the Sinclair Broadcast Group and its local TV stations across the country.

By contrast, local media in Texas widely debunked the misinformation, explaining that natural gas infrastructure was freezing over and more to blame than wind power, and that the root problem was from the state's failure to require utilities to winterize.

Sen. Bernie Sanders, chairman of the Senate Budget Committee, said over the weekend that amid the immediate emergencies of climate change, Covid-19, mass unemployment, and homelessness, congressional Democrats cannot afford to dampen their infrastructure ambitions in the hopes of winning support from obstructionist Republicans.

Why Dr. Seuss Would Have Despised His Right-Wing 'Defenders'

Thuggish Georgia Teen Looked For Trouble On Jan. 6 -- And Found It