In the coverage leading up to and following CIA acting Director Gina Haspel’s confirmation hearing to become director, multiple Fox News personalities and guests have asserted that torture helped lead to the death of Osama bin Laden in 2011. However, the Senate’s 2014 investigation of the CIA torture program indicates that there is no evidence for this claim.

In recent days, Fox figures and guests have made bold claims that torturing detainees at secret CIA prisons known as “black sites” resulted in valuable intelligence that helped track down the former leader of Al Qaeda:

In 2014, the Senate investigated the CIA’s torture program. According to a Vox summary of the 525-page document, the Senate report reveals that the CIA extracted “key intelligence” on bin Laden courier Abu Ahmed al-Kuwaiti — “‘including information the CIA would later cite as pivotal’ in finding Bin Laden” — by 2002. However, “the CIA didn’t acquire any intelligence on al-Kuwaiti via torture until 2003. The CIA had begun trying to find and identify al-Kuwaiti well before any of that information was in.”

In 2004, the CIA torture program did capture a man named Hassan Guhl who told the U.S. government that al-Kuwaiti was a bin Laden assistant and that the Al Qaeda leader “likely lived in a house with a family somewhere in Pakistan,” according to Vox. However, “Ghul told the CIA all of that before they decided to torture him.” The Senate report explains that “during and after the use of the CIA’s enhanced interrogation techniques, Ghul provided no other information of substance on al-Kuwaiti.” From the Senate’s report on CIA torture, via NPR: 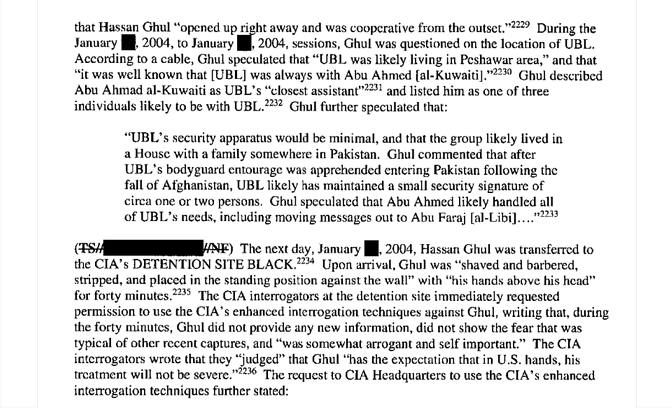