The surprising Electoral College victory of President Donald Trump has been like winning the lottery for nativist extremists and other fringe groups. For Krikorian, he’s been making the most of it by arguing in the mainstream press that his group, long attacked from across the political spectrum for its connections to eugenics-friendly white nationalists and shoddy research, doesn’t deserve to be labeled a hate group.

The Southern Poverty Law Center listed CIS as a hate group for the first time when our annual count was published in February of this year. The designation resulted primarily from their move to start publishing the work of discredited race scientist Jason Richwine (who was once forced to resign from the arch-conservative Heritage Foundation) and their shocking circulation of an article from one of America’s most prominent white nationalist websites and another written by a fringe Holocaust-denier in their weekly newsletter.

On the question of the CIS newsletter, Krikorian attempted to play down its significance and the racists included in it, arguing in the Washington Post that it is “trivial” for SPLC to criticize CIS for “occasionally includ[ing] pieces by writers who turned out to be cranks.” In a May 3 appearance on NPR, Krikorian doubled down, saying that “it doesn’t even pass the laugh test” for SPLC to criticize CIS for circulating the work of a known Holocaust-denier like John Friend.

The SPLC decided to conduct a more thorough investigation into CIS’s weekly immigration commentary email roundup, with the help of the civil rights group Center for New Community (CNC). Our findings reveal that on far more than a few occasions CIS has circulated materials from white nationalists and anti-Semites, prominent racist thinkers whose “crank” status is well known (in many cases for decades). Rather than reflecting an interest in a range of debatable viewpoints, as Krikorian also likes to point out that CIS circulates New York Times articles, CIS’ newsletter reveals an organization with a sophisticated grasp of the nativist extremist and white nationalist movement. The evidence, from the ideology of CIS’ founder to its publishing of Richwine, shows that this fluency is because the group is cut from the same cloth.

SPLC and CNC examined approximately 450 of CIS’s weekly emails dating back almost 10 years and found that CIS circulated over 1,700 articles from VDARE.com, an average of over three VDARE articles in every weekly immigration roundup it sends out.

VDARE is a blatantly racist website and a hub for white nationalists and anti-Semites who are opposed to non-white immigration. VDARE’s founder is Peter Brimelow, one of the high priests of the “Alt-Right,” the latest rebranding of white nationalism. Krikorian is quite familiar with Brimelow, and wrote a review of Brimelow’s infamous anti-immigrant book Alien Nation, calling it a “flawed jewel.” CIS also published Brimelow in a 1998 colloquy titled “What , Then, Is the American, This New Man?”

In total, CIS has circulated 51 articles penned by Brimelow, the majority of them republished from VDARE.

A further 27 were authored by John Derbyshire, a white nationalist Brimelow hired after the former was fired by the National Review in one of the magazine’s periodic purgings of racist contributors for a screed he wrote titled, “The Talk: Non-Black Version.” The article included lines like, “A small cohort of blacks — in my experience, around five percent — is ferociously hostile to whites and will go to great lengths to inconvenience or harm us,” as well as handy tips like, “If planning a trip to a beach or amusement park at some date, find out whether it is likely to be swamped with blacks on that date.”

CIS also circulated three articles from the white nationalist website American Renaissance, headed by Jared Taylor, one of the most prominent white nationalists of the past quarter century, and one Taylor article published at VDARE. Taylor organizes a yearly conference, which is among the most well attended white nationalist gatherings.

Following Hurricane Katrina in 2005, Taylor wrote, “Blacks and whites are different. When blacks are left entirely to their own devices, Western civilization — any kind of civilization — disappears.” This sentiment resonates with one of Krikorian’s most infamous remarks made after the devastating 2010 earthquake in Haiti. In the ensuing debate around accepting Haitian refugees, Krikorian said, “My guess is that Haiti’s so screwed up because it wasn’t colonized long enough” (his emphasis).

Six articles written by the notorious Norwegian anti-Muslim blogger Peder Are Nøstvold Jensen who writes under the name “Fjordman,” were also circulated by CIS in its weekly emails. Fjordman was cited over 100 times in the manifesto of racist mass murderer Anders Behring Breivik, who killed 77 people in Norway in 2011.

Our study further found that CIS shared material with its readers written by anti-Semites and Holocaust deniers and published on some of the most prominent anti-Semitic websites. CIS circulated two articles from the American Free Press (AFP), which carries stories on Zionism, secret “New World Order” conspiracies, and thinly veiled vilification of American Jews and Israel.

Yet another article authored by a white nationalist writer with anti-Semitic tendencies was circulated by CIS. Peter Gemma spent years as the head of design, marketing, and advertising for the racist tabloid of the Council of Conservative Citizens (CCC). Gemma once reviewed a book by British denier David Irving, organized a 2005 speaking event for Irving and gave a speech at the denialist Institute for Historical Review, according to the Institute for Research on Education & Human Rights. In 2000, Gemma appeared with David Duke and Don Black, both former leaders of the Knights of the Ku Klux Klan, at an event meant to raise money for the white nationalist British National Party, according to the same report.

CIS also sent out a piece from Iran’s notoriously anti-Semitic Press TV. Holocaust-deniers and anti-Semites including David Duke are regular guests on the Tehran based TV channel.

One article CIS circulated was authored by Holocaust-denier John Friend. Friend has described the Holocaust as a “manufactured narrative, chock full of a wide variety of ridiculous claims and impossible events, all to advance the Jewish agenda of world domination and subjugation.” Another piece CIS circulated is from Rense.com, a site full of Holocaust-denial material which published a birthday ode to Adolf Hitler in 2015 including lines like, “You NEVER built Jewish gas chambers,” and “You removed Jews and their Zionist agenda from positions of power in banking, media and politics, but only after World Zionism declared World War on Germany In 1933 and proved their hatred for the German people.” The piece circulated by CIS refers to Jews as “predators” and includes lines like, “How come that the Jews are so rich? Only Jews are offended by the question because they are too arrogant and insecure to recognize [sic] that every stranger, not necessarily a Jew, is being asked from time to time who is he and what makes him tick.”

As our analysis shows, CIS has a long track record of disseminating articles from white nationalist, and anti-Semitic websites for a reason. That reason is that CIS, founded in part by white nationalist John Tanton, is not some sober think tank pushing numbers, as Krikorian would very much like mainstream press outlets to believe. 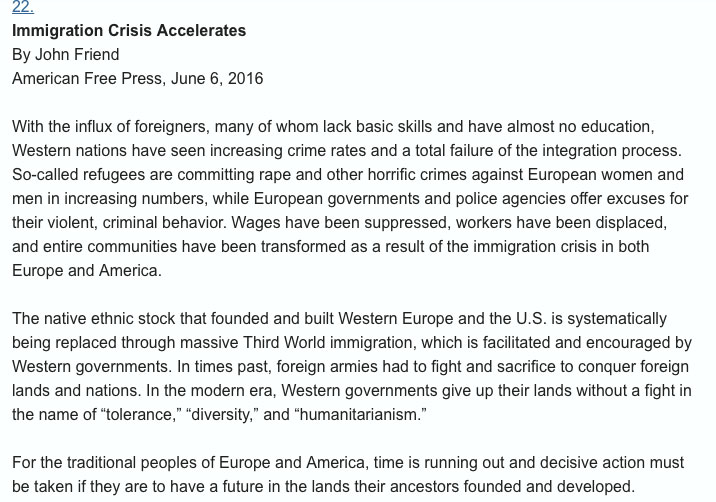 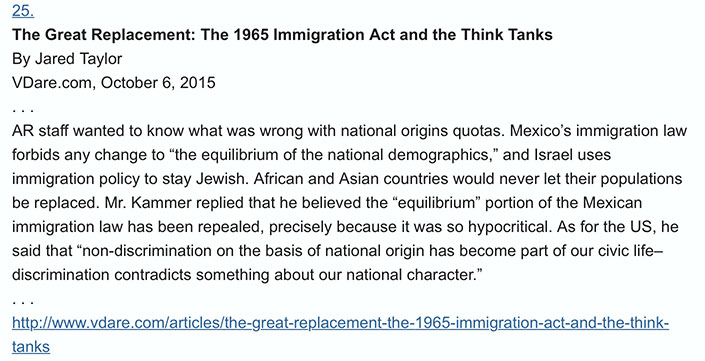 This one is truly bizarre. Rense.com is an extremely fringe website dedicated to anti-Semitic conspiracy theories. 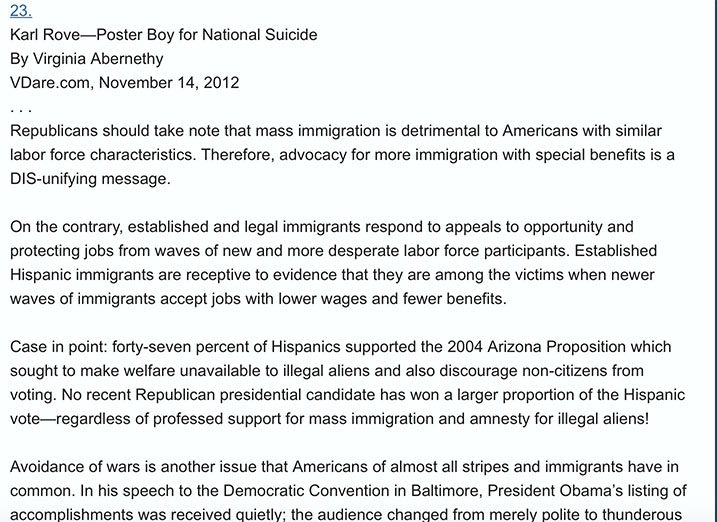 CIS circulated an article by Virginia Abernethy, a woman who describes herself as an “ethnic separatist.” She’s another longtime and well-known white nationalist. 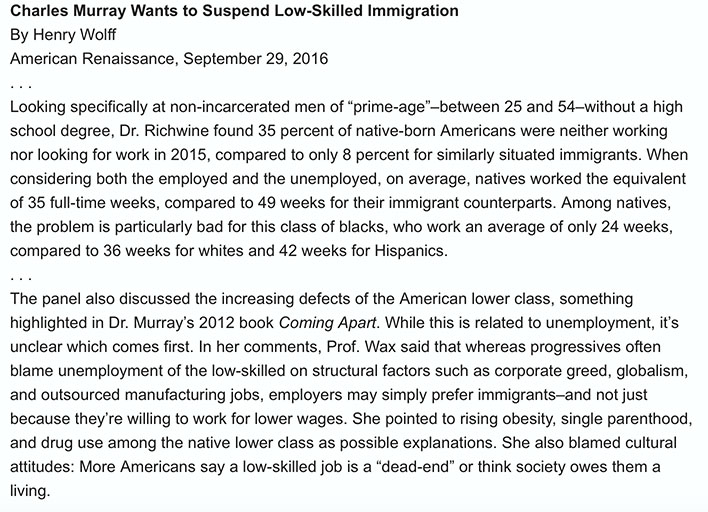 CIS also circulated a handful of links from Jared Taylor’s “American Renaissance.” Here it’s for an article extolling race scientist Charles Murray, which aligns with the organization’s decision to start publishing another race scientist in Jason Richwine.
This article was made possible by the readers and supporters of AlterNet.

The two most common themes of MAGA sorehead emails I received last year were the inevitability of an anti-Biden landslide in 2022, and the certainty of Hillary Clinton’s prosecution by “independent counsel” John Durham supposedly for falsifying evidence against Donald Trump during the “Russia, Russia, Russia hoax,” as Trump styles it.

In Ukraine War, 'Escalation' Is Just Another Deadly Lie