While California and the United States as a whole are breaking coronavirus case records, the California Republican Party has been backing the congressional bid of coronavirus conspiracy theorist and writer Mike Cargile.

Cargile, who is a QAnon conspiracy theorist, has claimed that the coronavirus is a "scamdemic" and "NOTHING compared to the diseases and plagues headed this way via the rats and the homeless"; and has praised the lie-filled Plandemic video as "EXACTLY why I'm in this race!"

He states on his campaign website that he is "a writer, an actor, a director, a producer, an editor and a marketing director." He wrote, directed, and acted in the little-known 2019 movie Buying Time, which is described on IMDb as "a Christian movie set in the near future at a time when Christianity is illegal."

Cargile is running for Congress in California's 35th Congressional District against incumbent Democratic Rep. Norma Torres. The Republican Party of California hasendorsed his bid. The state party has also backed the congressional bids of radio host Mark Reed, who recently shared a meme questioning the "odd" timing of "the George Floyd psy-op"; and writer Buzz Patterson, a QAnon supporter. It previously endorsed QAnon supporter Joanne Wright, who did not finish in the top two in the California primary and is no longer running (the party said it endorsed her automatically because she was the only Republican running in that congressional district).

Media Matters previously documented that Cargile is one of at least 55 congressional candidates this cycle who back or give credence to the QAnon conspiracy theory. He lists the QAnon slogan "#WWG1WGA" ("where we go one, we go all") on his Twitter profile and has also tweeted his support for QAnon.

QAnon conspiracy theorists essentially believe -- based on cryptic posts to online message boards from an anonymous user known as "Q" -- that Trump is secretly working to take down the purported "deep state," a supposed cabal of high-ranking officials who they claim are operating pedophile rings. An FBI field office released a May 2019 bulletin listing QAnon as a potential domestic terrorism threat, and the conspiracy theory has been linked to multiple acts of crime and violence.

Cargile has also frequently used social media to post conspiracy theories about the coronavirus. For example:

In a March 5 tweet, he wrote that "the Coronavirus is NOTHING compared to the diseases and plagues headed this way via the rats and the homeless. These Socialist Democrats want NO CONTROL at our border and no control of our cities. While wave upon wave of the infected make their way onto our streets." He made similar remarks in a March 5 Facebook post.

He wrote on Facebook and Twitter on April 16: "Is it just me, or does anyone else find it strangely odd that different cities in different states with different levels of infection ALL seemed to have their 'worst day' simultaneously? Hmmm."

In an April 27 tweet, he wrote: "We were attacked by a Chinese bio-weapon. We did what we needed to do. We braced for the worst...it never happened. We now have a handle on this. Let my people go! And let us all get back to work!" (The "Chinese bio-weapon" claim is a falseconspiracy theory.)

He has also praised Plandemic, a debunked video that, as The New York Timeswrote, "wrongly claimed a shadowy cabal of elites was using the virus and a potential vaccine to profit and gain power." On May 5, he posted a now-defunct link to the film on Facebook and wrote: "This is EXACTLY why I'm in this race! Unless we change the leadership in this State and this Country with people who possess the courage to make meaningful change, this will all happen again." He also posted similar remarks that day on Twitter.

On Facebook on June 7, Cargile posted the hashtags "#covid #scamdemic #dontbefooled" and a meme stating, "Imagine a virus so intelligence that it knows how to vanish during riots for its own safety!" (he also posted the meme on Twitter that day without those hashtags): 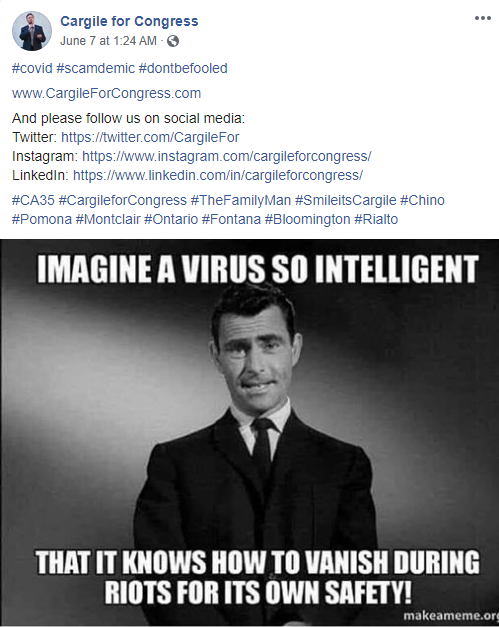 From Your Site Articles
Related Articles Around the Web
mike cargile