On Wednesday morning, President Donald Trump retweeted three anti-Muslim videos posted by Jayda Fransen, the deputy leader of the far-right, ultranationalist Britain First political organization, who has previously been “found guilty of religiously aggravated harassment.” Trump’s retweets of three videos attempting to link Muslims to violent crime, one of which has been debunked and the other two of which lacked context, were praised by white nationalists and far-right ideologues on Twitter and by Internet trolls on 4chan, 8chan, and Reddit message boards. At least one prominent fake news website also defended Trump’s retweets.

Trump retweets video of crippled white kid in Europe being beaten by migrants, and white people being thrown off a roof and then beaten to death, He’s condemned for showing us what the fake news media WON’T. Thank God for Trump! That’s why we love him!

When you get outraged over Trump retweeting Britain First yet simultaneously support Antifa, an extremist group that violently attacks people with bike locks, pepper spray & rocks for having a different opinion. pic.twitter.com/2Kfac2liNI

If you’re outraged over Trump retweeting Britain First, why do you also support #BlackLivesMatter – a group whose ideological guru is a cop-killing terrorist? ???? https://t.co/gm8Lhf2oyq

He actually did it. Mainstream media hate articles incoming in 3…2…1… pic.twitter.com/0kuB4EFS19

The dishonest lying press is more upset about Trump sharing videos of migrant crime than they are about migrants raping, beating, and murdering Europeans across the continent. #WednesdayWisdom#FakeNewspic.twitter.com/5W89Kf1Ure

Trump may not be perfect, but just think: instead of a president ignoring and obfuscating the problems surrounding mass migration, we have a president literally retweeting Liveleak-style migrant crime videos. Important paradigm shift. pic.twitter.com/UDkcyH4mq4

We should annex Britain tbh

Another 4chan/pol/ user wrote, “PRAISE TRUMP,” calling the videos Trump shared “/POL/-TIER MUSLIM CHIMPOUT VIDEOS” — an indication that the videos were extreme enough to have been promoted by 4chan users. 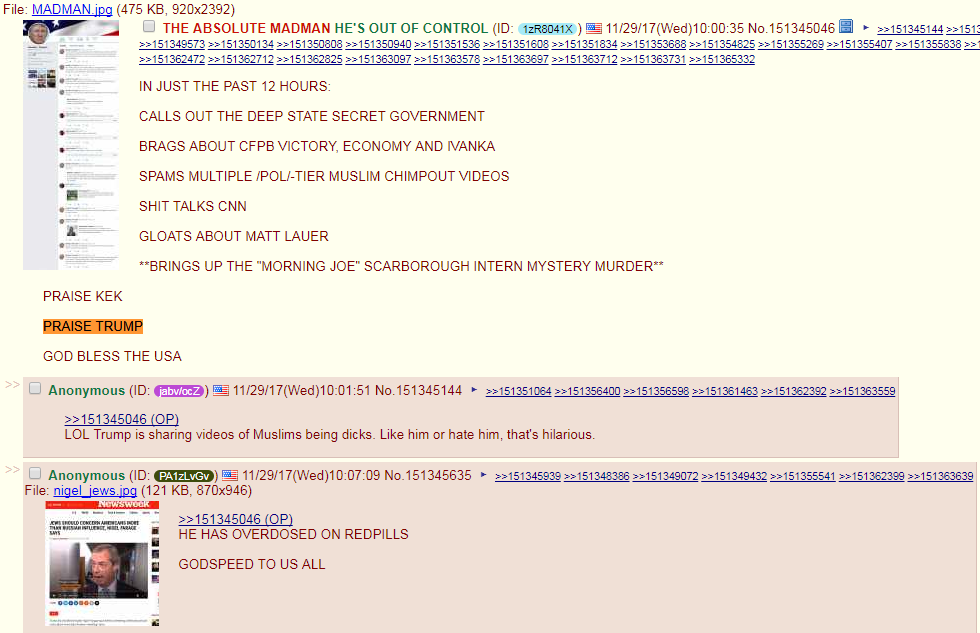 One user on the 8chan/pol/ message board, in reference to Trump’s tweets, wrote, “I’m still not tired of winning. Sieg fucking heil.”

And on the pro-Trump subreddit “/r/The_Donald,” one user shared the videos Trump retweeted and directed other users to an online tool that can be used to download the videos, likely to share them through different mediums.