Fox News: Where a historical documentary can’t run an ad warning about the dangers of fascism because it contains “disgraceful Nazi imagery,” but host Laura Ingraham can show graphics comparing Planned Parenthood to Nazi leader Adolf Hitler with impunity.

During the February 26 edition of Fox News’ The Ingraham Angle, Ingraham spent several segments delivering a sensationalized and inaccurate rant against abortion, particularly those performed later in pregnancy. In addition to alleging that Democrats support “the wanton extermination of children already born” — a false talking point that has been circulating among right-wing media, anti-abortion groups, and other conservative figures — Ingraham also compared Planned Parenthood to Nazi Germany, claiming that “Hitler, just like Planned Parenthood, practiced and defended mass extermination.” To drive her point home, Ingraham showed the following graphic on the screen: 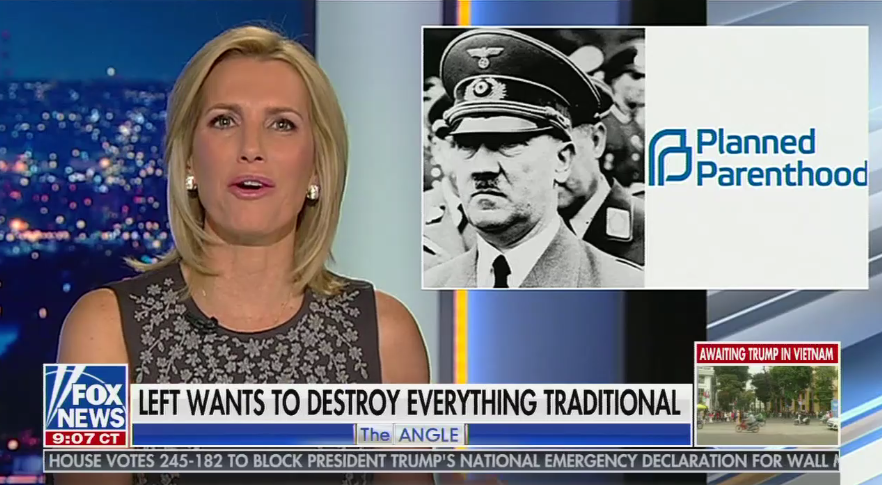 Fox News viewers — particularly those who watch the prime-time lineup of Tucker Carlson, Ingraham, and Sean Hannity — are no strangers to xenophobic or sexist content, racist dog whistles, and even talking points borrowed from white nationalists. And this isn’t the first time that Ingraham or other Fox News figures have asserted inaccurate and harmful comparisons between Planned Parenthood and Nazis. However, Ingraham’s choice of talking points and on-screen imagery raises some questions in light of Fox News’ recent decision to reject an advertisement warning about the dangers of fascism and Nazi ideology.

On February 13, The Hollywood Reporter wrote that Fox News executives had “rejected a national advertising buy” promoting A Night at the Garden, an Oscar-nominated documentary short warning “viewers about the potential dangers of American fascism.” Although the ad was intended to warn “Sean Hannity’s largely conservative viewers about the potential dangers of President Donald Trump’s brand of populism,” ad sales representatives for the network rejected it, citing concerns from Fox News CEO Suzanne Scott who reportedly said that it was “not appropriate.”

The network clarified the alleged “inappropriate” nature of the anti-facism ad in a subsequent comment to The Week, with Fox’s President of Ad Sales Marianne Gambelli stating that “regardless of the film’s message,” the ad was rejected for being “full of disgraceful Nazi imagery” which “did not meet our guidelines.”

Fox News has found itself under a great deal of pressure going into the upcoming advertising sales season — thanks in large part to an increasing awareness by many companies that associating their products with Fox News is bad for business. Dozens of advertisers have abandoned Ingraham’s show alone in the past year. As Variety reported in January, the network is currently in the process of trying to rebrand itself to advertisers after “sponsors have pulled their advertising” from a number of prime-time shows. The report continued:

Keeping the ad dollars flowing at Fox News is critical – not only for the network, but for its parent company, 21st Century Fox. At some point in the next few months, Fox is slated to sell the bulk of its cable and studio assets to Walt Disney Co. The remaining company, known as Fox Corporation will rely on not only Fox News and Fox Business Network, but Fox Sports and Fox Broadcasting. The Fox News unit has contributed around 20% of the overall company’s operating profit. In a pared-down structure, it might be more. And while many analysts focus on the revenue Fox News derives from affiliates, its ad dollars will also be important after the sale.

There are consequences to allowing this kind of extreme rhetoric to continue unchecked that extend beyond the negative impact on advertisers for having their products associated with vitriol like Ingraham’s. Anti-abortion violence and harassment have been on the rise in recent years — a trend fueled in part by the extreme rhetoric of right-wing media figures, whose anti-choice talkings points are echoed by the president.

When Fox News pitches upfronts this May, advertisers should remember: Fox News was unwilling to show an advertisement denouncing the dangers of Nazism, but the network seemingly has no problem invoking or showing Nazi imagery to attack abortion providers and patients.

IMAGE: From A Night At The Garden, Marshall Curry’s Oscar-nominated short about an infamous pro-Nazi German Bund rally at Madison Square Garden on February 20, 1939.