Most of us are old enough to remember when Republicans eager to court the evangelical Christian vote would recoil in (not entirely genuine) horror at any hint of antisemitism in any political candidate, particularly on a GOP slate. But for the new post-insurrection Trumpian Republican Party, it seems not only to be no problem, it's practically an asset.

Case in point: Dave Reilly, an unrepentant antisemite who believes "Judaism is the religion of anti-Christ" is running for the local school board in Post Falls, Idaho, with the wholehearted endorsement of the Kootenai County Republican Central Committee (KCRCC). When pressed about their candidate, the GOP chair doubled down, insisting that the press reports about his bigoted views—based on Reilly's own published tweets and articles—were "false," and that Reilly's story was "a remarkable one of salvation and is an inspiration to those struggling with life's challenges."

"I believe Dave is a good man who will make an excellent Trustee and will resist the Progressive/Marxist indoctrination of our children," retorted KCRCC chair Brent Regan on Facebook. "I encourage you to ignore the false accusations and continue your support of ALL of our recommended candidates."

When establishment Republicans have called Regan out for supporting Reilly, he has claimed they were making "accusations without complete information," and claimed that the information in the Daily Beast article by Kelly Weill that kicked off the controversy in early October did so "with quotes either fabricated or taken out of context."

As Weill and the blog Angry White Men documented, Reilly's history of posting antisemitic and white nationalist talking points on social media is extensive. His views first attracted attention in 2017, when he avidly promoted the deadly "Unite the Right" white nationalist march in Charlottesville, Virginia, while ostensibly covering the event for WHLM-AM radio in Bloomsburg, Pennsylvania, a station owned by his father.

"Good morning. The #AltRight slept tight and #Antifa is still sleeping. Probably hungover or dope-sick. See yall at Lee Park. #Unite the Right," one of his preevent tweets read. Reilly then resigned while putting out a statement denouncing "Nazism, the KKK, Racism, White Supremacism, and political violence," adding: "The accusations that I am a White Supremacist, Nazi, Racist or anything of this kind is pure slander."

Over the ensuing years, Reilly then embarked on a career of rubbing shoulders with racists, notably the white nationalist "Groyper" movement led by Nicholas Fuentes and embraced by pundit Michelle Malkin, who has endorsed Reilly's candidacy in Post Falls as well. Reilly attended one of their conferences. He also made multiple appearances on the white nationalist YouTube channel "Red Ice." 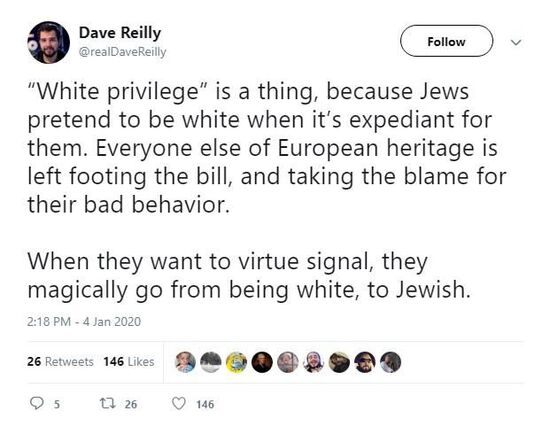 He tweeted that "Judaism is the religion of anti-Christ," that "all Jews are dangerous," and opined more Americans should believe antisemitic stereotypes.

On Twitter, Reilly's antisemitism was rampant. "Jews pretend to be white when it's expedient for them," he tweeted last January, which is why "white privilege is a thing." Later that month, he shared an article claiming 61 percent of Americans agreed with at least one antisemitic stereotype. "Good news! Let's get those numbers up!" he tweeted.

When Poland announced its withdrawal from a Holocaust event in January 2020, Reilly expressed his approval ("Poland FTW"), and when he was questioned again about his attendance at Unite The Right, he claimed that criticizing his presence alongside white supremacists was inherently Jewish behavior ("the idea that one can be contaminated by association is Jewish," he wrote).
Reilly also tweeted two pictures of billboards, which had been doctored to read "when Jews hold power they abuse it" and "all Jews are dangerous," and promoted conspiracy theories about "Jewish subversion." "Judaism is the religion of anti-Christ," he tweeted at one point in February 2020.

The targets of Reilly's bigotry include women and the LGBTQ community. He tweeted that women's suffrage was "a mistake" and that "women should not be allowed on social media." He also accused Transportation Secretary Pete Buttigieg of "dabbling in human trafficking" for adopting a child with his husband Chasten Buttigieg.

After leaving WHLM, Reilly worked as an editor for E. Michael Jones, the leader of an antisemitic "traditionalist Catholic" group based in Indiana and the publisher of Culture Wars magazine, which is noted for running such articles as "Judaizing: Then and Now," "John Huss and the Jews," "The Converso Problem: Then and Now," "The Judaism of Hitler," "Shylock Comes to Notre Dame." In 2019, a Reilly piece for the magazine titled "Generation Identity Crisis" claimed that "Jewish sociologists" had used "Marxist social engineering" to ignite a "mass movement of left wing agitation and sexual liberation … [leading to an] almost complete breakdown of social norms." He also wrote that "the Catholic Church has been infiltrated by homosexuals, Jews, and bad leadership."

Michelle Lippert, a retired professor of philosophy at North Idaho College and current school board member, told KXLY-TV that Reilly's candidacy is worrisome. "I've read pieces he's written. I've seen his tweets. I've listened to podcasts that he's participated in and it's clear that he's very anti-Semitic he is misogynistic, homophobic, and he has an appreciation of white supremacy," Lippert said.

For his part, Reilly—who only moved to Post Falls in 2020—has mainly claimed martyrdom at the hands of the media and liberals. He told The Coeur d' Alene Press that he has "been subjected to incredible financial, social and personal hardships because he was a public supporter of Donald Trump."

"As a result of these attacks on me and my family by radical left-wing activists, I have been able to more closely imitate Jesus Christ, who was mocked, scourged, put on a show trial, spat upon and ultimately killed," Reilly said. "I'm extremely blessed to be able to participate in that suffering for Christ's sake."

His primary rebuttal to the accurate characterization of his worldview as antisemitic is the same as Regan's: holding up his endorsement by a local man of Jewish descent named Alan Golub, who they both describe as "the son of a Holocaust survivor." What they omit from their description is that Golub, a wealthy Bitcoin promoter, does not appear to be a practicing member of the traditional Jewish faith; rather, he is listed as the primary agent for Aman Ministries, a nonprofit group with a website devoted to a mishmash of Hebraic and Christian fundamentalism, in the manner of Jews for Jesus.

In the meantime, both Reilly and Regan have come under sharp criticism from the pro-Israel group StandWithUs Northwest, which attempted to open a dialogue with both men and was rebuffed. On Facebook, the group noted: "If you look at our statement, you will see that our 'allegations' are actually screen shots of tweets that Reilly himself posted.

Reilly continued lying about StandWithUs, alleging numerous untrue things about us, in an attempt to deflect from his own antisemitic writings."

This doubling-down approach by Trumpian Republicans on efforts to call out the GOP's embrace of far-right extremism was reflected Jan. 6, when Reilly was a speaker at a rally in Coeur d'Alene organized to protest Trump's defeat in the election. He told the crowd that the November elections were fraudulent.

"This election was rigged and it was stolen from us, the American people," he said. "There's more votes in Pennsylvania than registered voters."

Before the mob in Washington began its assault on the Capitol, the Idaho crowd heard Reilly denounce police officers and the FBI for lacking integrity; called Democrats pedophiles; and claimed the CIA has been smuggling drugs, children, and money. He also attacked then-Vice President Mike Pence.

"Mike Pence just released a letter saying he's not going to do what he's supposed to do," he told the audience, which booed loudly, with shouts of "traitor". The event's emcee then took the microphone and announced: "Supposedly they're taking the Capitol and taking out Pence."

From Your Site Articles
Related Articles Around the Web
idaho republicans