Trump inspired a second wave of attacks from conservatives by mocking her public account of high school sexual assault at his October 2 political rally in Mississippi, as The Washington Post reported:

President Trump mocked the account of a woman who accused Supreme Court nominee Brett M. Kavanaugh of assault and told a Mississippi crowd that the #MeToo movement was unfairly hurting men.

Trump, in a riff that has been dreaded by White House and Senate aides, attacked the story of Christine Blasey Ford at length — drawing laughs from the crowd. The remarks were his strongest attacks yet of her testimony.

“ ‘I don’t know. I don’t know.’ ‘Upstairs? Downstairs? Where was it?’ ‘I don’t know. But I had one beer. That’s the only thing I remember,’ ” Trump said of Ford, as he impersonated her on stage.

“I don’t remember,” he said repeatedly, apparently mocking her testimony.

While three Republican senators criticized Trump’s denigration of Ford, other conservatives responded by defending Trump’s attack on her and doubling down with their own. 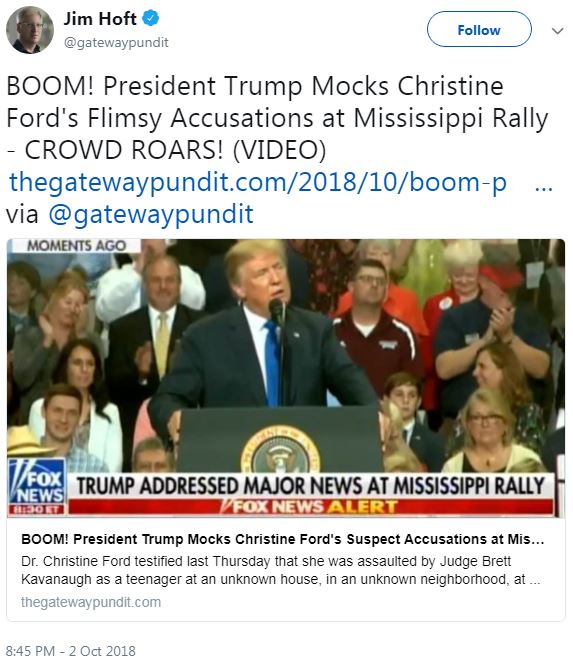 MSNBC contributor Hugh Hewitt: Ford’s “story is crumbling, and the president just broke the glass last night. He was not mocking her. He was attacking the credibility of her testimony.”

Other right-wing media figures accused Ford of repeatedly lying in her testimony, drawing on a letter from an ex-boyfriend that said, among other things, that she helped a friend prepare for a polygraph test — a claim that was soon countered by the friend in question. 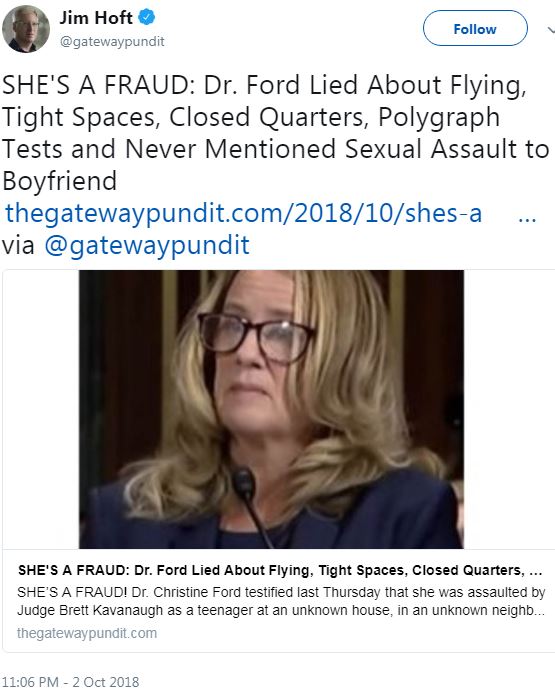 Fox News contributor Lisa Boothe: “You look at … what looks like blatant lies” Ford “has told people about flying. … There’s been so many inconsistencies, so many lies.”

And Hoft, along with others, have stated that Ford should be criminally investigated or even locked in prison.

Fox News guest Joe diGenova: Ford “should be investigated and if necessary charged with the crime of submitting a false statement to the Senate.”

Turning Point USA’s Candace Owens: “I would like to be among the first to say that I want Christine Blasey Ford to serve time in PRISON.” 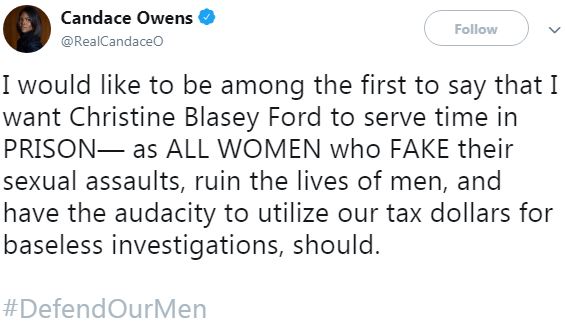 Hoft, citing Owens: “Is It About Time to Lock Up Christine Ford in a Prison Cell With Two Front Doors?” 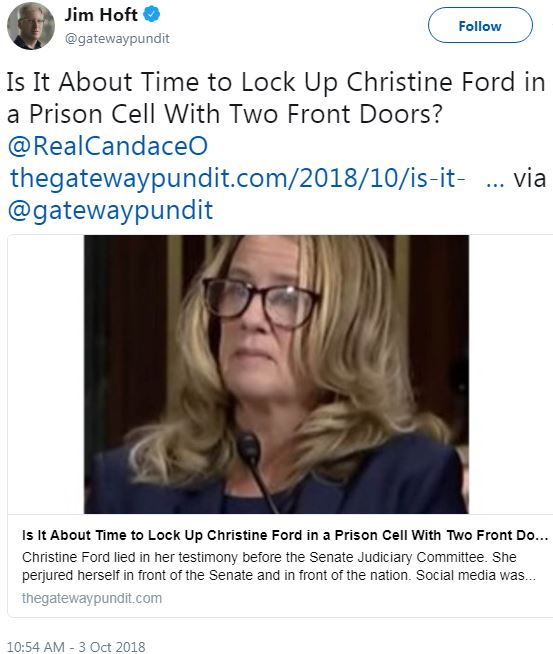 The precise nature of the Chinese balloon that drifted through the high atmosphere above the United States before being shot down by the American military off the coast of South Carolina is still not known, though the military seems confident it was a "surveillance" balloon and seemingly every conservative pundit put in front of a microphone believes it was carrying either some sort of zombie-producing spores or, worse, thousands of green M&M's to be scattered through the American landscape, turning our wildlife "woke."

What we do now know, however, is that these balloon flights seem to be a regular occurrence—and one that nobody has attempted to stoke a public panic over until now. The Department of Defense's own news site reports that Chinese balloons appeared over the United States at least three times during the Trump administration. None of those other balloons appear to have been intercepted. There were no Republican politicians posing with guns promising that they'd personally take care of them balloons if they floated over their neck of the woods. None of them appear to have scattered zombie spores, M&M's, or anything else.

Why Experts Believe George Santos Probably Has A 'Personality Disorder'

Rep. George Santos (R-NY) has faced a litany of accusations in his short time as a lawmaker. From financial mishandling, professional embellishments, and personal occurrences, Santos has been accused of lies across the board.

Now, a new analysis is breaking down the dynamics of compulsive lying. According to Business Insider, psychological experts have explained how compulsive lying is often a characteristic of a personality disorder.