Parkland Survivor And His Family Targeted By Online Trolls

As a “graduation present” for Parkland shooting survivor David Hogg, trolls on 4chan and 8chan shared his contact information — including his home address and multiple phone numbers connected to his family — and called for his harassment. A day later, a prank call claiming there was a hostage situation in his house led to an armed police team being deployed there. The practice, known as “swatting,” is a harassment tool online trolls use to attack their victims, and it has proved fatal on at least one occasion.

The now-archived 4chan thread is a response to Hogg teasing the announcement of the activism “Road to Change” bus tour, a gun violence prevention tour he and some of his fellow Parkland shooting survivors just kicked off. In a June 3 post, a troll references Hogg having a “surprise for us” adding a link to the announcement of the bus tour, and posts contact information that includes home address and phone numbers linked to the Hogg family, saying it’s a “graduation present.” 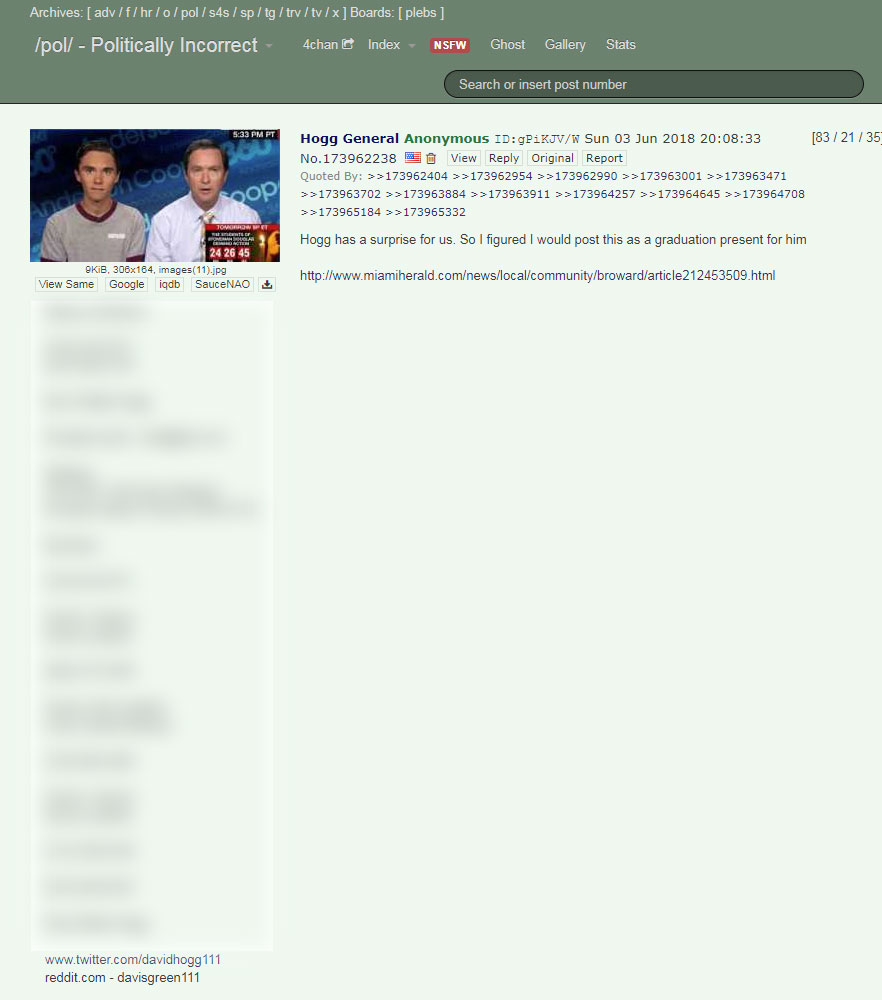 After the post and subsequent replies were apparently deleted from 4chan, trolls took to 8chan (a message board launched in response to perceived censorship on 4chan that has since became more anarchic) to continue the “doxxing,” or the publication of a victim’s contact information with malicious intent. In the 8chan thread, trolls complained that 4chan (which they refer to as “cuckchan”) had deleted the original post, plotted to send “large usps boxes” to the Hoggs’ home address, and schemed about “looking into” a patent under Hogg’s father’s name. After the news broke that Hogg had been swatted, at least one troll on the thread also complained that “unfortunately he survived.”

The doxxing and subsequent targeted harassment of Hogg follow months of right-wing media attacking and floating absurd conspiracy theories about him in reaction to his gun violence prevention activism. Online, trolls are mirroring the attacks that right-wing media figures and the gun lobby are waging on Parkland shooting survivors, or vice versa.

And in taking to message boards like 4chan and 8chan to plot hits on their victims, they’re continuing what is becoming a terrifying pattern: During the 2016 presidential campaign, 8chan launched a harassment campaign against journalist David Cay Johnston after he published an excerpt from President Donald Trump’s 2005 tax documents. After a judge upheld existing regulations to assault weapons, trolls shared his contact information on 8chan in clear efforts to target him for harassment. After he profiled an anti-Muslim Twitter crusader, a HuffPost reporter got doxxed on 4chan, followed by numerous colleagues. In 2014, 4chan trolls organized“Operation Lollipop,” an effort to infiltrate feminist Twitter and sow dissent. These message boards have proven to be ideal hubs for far-right trolls to organize harassment campaigns aimed at silencing, threatening, and hurting those they oppose politically, with little to no consequences.

Media Matters confirmed the veracity of the address and has edited the images from the message boards to blur all sensitive information.