Shane Trejo, who heads one of Michigan's Republican committees, wrote a 2017 piece that portrayed white supremacists who participated in the Charlottesville rally that year as "civil rights heroes." The Republican official has also praised an anti-Semitic white supremacist for engaging in political violence and said that the left has failed to "stop white brilliance from emerging," adding that "the cream rises to the top, after all."

Trejo is the chair of the Michigan 11th District Republican Committee. He's also a commentator who writes for the right-wing site Big League Politics, where he has been a source of conspiracytheories about the 2020 election being stolen in Michigan.

Daily Beast reporter Kelly Weill wrote on November 16 that Trejo "made headlines earlier this year when he encouraged the ouster of a fellow Republican who had voted to certify President Joe Biden's election." She reported that Trejo "used to host a podcast with a member of the white supremacist group Identity Evropa" and that he and the co-host "appear to have spoken favorably about white supremacists."

Trejo was also the "News Editor" for the now-dormant website The Liberty Conservative, where he celebrated white supremacists and their use of political violence.

In August 2017, white supremacists gathered in Charlottesville, Virginia, for the "Unite the Right" rally in support of white nationalism. On August 12, a white supremacist killed anti-racism activist Heather Heyer with his car.

In an August 11, 2017, piece previewing the rally, Trejo defended the organizers of the event by writing:

Having proclaimed the virtues of civil rights for generations, the left is now turning their backs on their principles and openly discriminating against white people who they suspect to be 'racist.'
…
Unwilling to let the protesters peacefully rally in favor of the Robert E. Lee statue in Emancipation Park, organizers first had their permit for the rally revoked before leftist businesses joined in the witch hunt.

The conclusion of the post directed people to a Facebook event page for the "Unite the Right" rally. 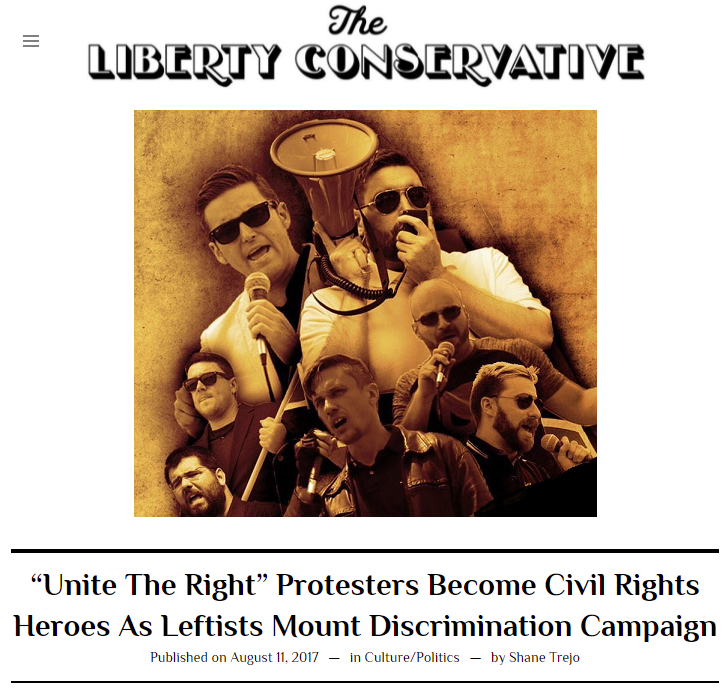 In a November 18, 2016, piece for The Liberty Conservative, Trejo claimed that "unhinged behavior" by "victim groups" has "emboldened the right and has caused whiteness to bounce back." He added: "The left has failed. Even their artificial constructs cannot stop white brilliance from emerging. The cream rises to the top, after all."

Trejo also praised violent white supremacist and antisemite Kyle Chapman, who is also known as "Based Stickman." As the Southern Poverty Law Center summarized, "Chapman was transformed from an obscure Bay Area commercial diver to celebrated right-wing meme in March 2017 when ... he beat a counter-protestor over the head with a wooden rod during the #March4Trump in Berkeley, California."

In an April 24, 2017, piece Trejo claimed, "By inflicting righteous violence onto the skull of a lowly communist, Stickman emboldened many others to stand with him as well." Trejo wrote:

Having not been properly indoctrinated, Stickman failed to understand that it was improper for him to do anything but sit on your hands in the face of virulent leftism. He didn't realize that the big money donors come first, and fighting for freedom comes second. He simply acted like a man, and heeded the call to stand up for his rights. By inflicting righteous violence onto the skull of a lowly communist, Stickman emboldened many others to stand with him as well.

After days of nonstop coverage of a Chinese balloon crossing the continental United States, far-right influencers are now using it to sell prepper supplies for what they claim is an imminent collapse of the American economy. Right-wing media personalities Charlie Kirk and Steve Bannon are hyping the recent Chinese spy balloon saga to sell prepper supplies on their shows.

Both Kirk and Bannon have plugged the preparedness company My Patriot Supply during their recent broadcasts, claiming that the balloon incident — which has been a major subject of fearmongering and conspiracy theories in conservative media — should prompt viewers to amass large quantities of food and other supplies in case of an apocalyptic disaster.