Reprinted with permission from Shareblue.com.

With his House seat no longer considered ‘safe’ by election forecasters, Rep. Devin Nunes (R-CA) is looking for someone to blame for his failing re-election campaign.

Instead of considering that his own failures may explain his sinking campaign, Nunes is pointing the finger at the right-wing’s go-to boogeyman: “radical leftists.”

In a fundraising email sent on Saturday, Nunes whined that “radical leftists” and the mainstream media are saying “nasty things” about him, though he failed to provide examples of these “nasty things” — likely because most of them are true statements about his own actions. 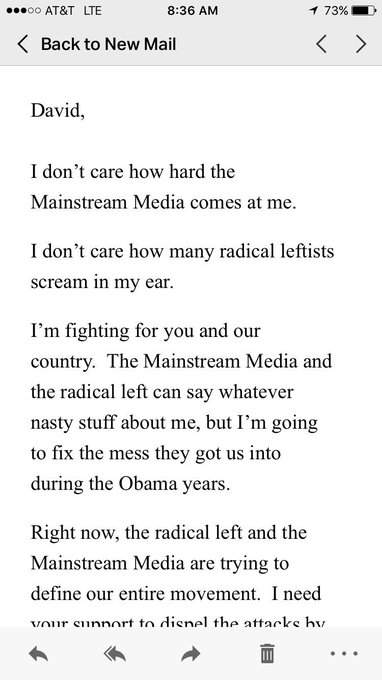 A day after his intelligence released a shoddy report on the Trump-Russia scandal, Devin Nunes sends out a fundraising email that doesn’t even mention Putin’s attack on the US. The real threat: leftist radicals.

The email comes just a day after the Republican-controlled House Intelligence Committee, which he leads, released the findings from its sham investigation into Russian interference. Even Nunes’ fellow Republicans admitted that the investigation was so inadequate and partisan that it undermined the credibility of the committee.

As the head of the House Intelligence Committee, Nunes was tasked with investigating Russia’s attacks on the 2016 election, as well as any potential coordination with the Trump campaign. But rather than providing oversight, he decided to run interference instead.

Nunes has spent the past year putting on an elaborate show on behalf of Trump. He became so notorious for doing the dirty work of the White House that his name even became synonymous with an embarrassing attempt by Republicans to discredit the FBI in an effort to shield Trump from scrutiny.

None of that has gone unnoticed by his constituents back in Fresno, CA. In a blistering editorial, Nunes’ hometown newspaper slammed his performance as a congressman, calling it “nothing short of embarrassing.”

“He certainly isn�t representing his Central Valley constituents or Californians, who care much more about health care, jobs and, yes, protecting Dreamers than about the latest conspiracy theory,” the editorial stated. “Instead, he’�s doing dirty work for House Republican leaders trying to protect President Donald Trump in the Russia investigation.”

In the last three election cycles, the Central Valley Republican has won his district comfortably. In 2016, Trump won the district by a 10-point margin.

But thanks in large part to his disgraceful performance over the past year, his district is no longer considered a “safe Republican” seat, according to top election forecaster Larry Sabato.

As Nunes struggles to keep his campaign afloat, his Democratic challenger — Fresno County Deputy District Attorney Andrew Janz — continues to have fundraising success, taking in more than $1 million in the first quarter of 2018.

Nunes can whine about “radical leftists” and the “nasty” mainstream media all he wants, but blaming his problems on imaginary boogeymen isn’t going to help him. His re-election campaign is failing because he is failing at his job.

Ukraine army in the field

To support my coverage of the war in Ukraine, as well as my regular political screeds and occasional personal pieces, you can buy a subscription at luciantruscott.substack.com

Days after provoking backlash for circulating inert 40-millimeter grenades inside the U.S. Capitol, House Republicans are again facing fierce criticism for their latest stunt to own the libs — donning assault rifle lapel pins, despite there being over 58 mass shootings in 2023 alone so far.