Study: Richest 0.00025 Percent Of Americans Own More Than Bottom 150 Million

As survey data continues to show that raising taxes on the wealthy is extremely popular among the U.S. public, new research by inequality expert and University of California, Berkeley economist Gabriel Zucman found that the richest 0.00025 percent of the American population now owns more wealth than the 150 million adults in the bottom 60 percent.

According to Zucman’s research, the richest 0.00025 percent—just 400 Americans—have seen their share of America’s national wealth triple since the 1980s, while the wealth of much of the U.S. population has stagnated or declined. 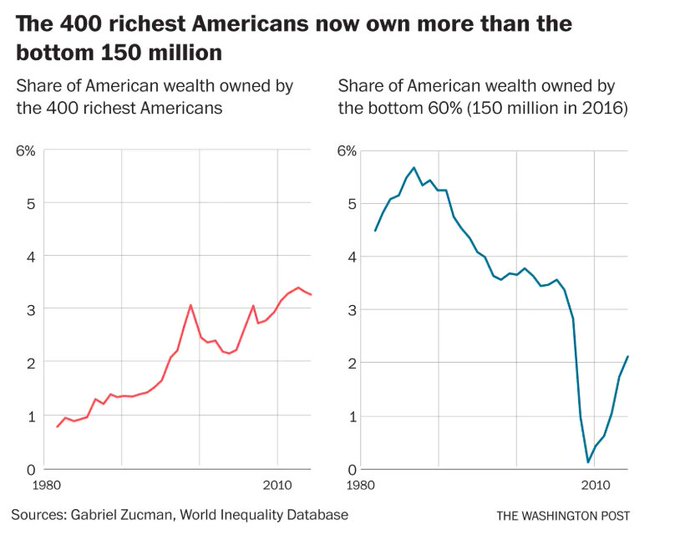 The 400 richest Americans have tripled their share of the nation’s wealth since the early 1980s and now own more of the country’s riches than the 150 million adults in the bottom 60% of the wealth distribution. https://www.washingtonpost.com/us-policy/2019/02/08/wealth-concentration-returning-levels-last-seen-during-roaring-twenties-according-new-research/?utm_term=.5ba7d345a34b …

As the Washington Post’s Christopher Ingraham noted in a breakdown of Zucman’s research, adults in the bottom 60 percent of the wealth distribution “saw their share of the nation’s wealth fall from 5.7 percent in 1987 to 2.1 percent in 2014.”

Consolidation of wealth at the very top, Ingraham observes, “is eroding security from families in the lower and middle classes, who rely on their small stores of wealth to finance their retirement and to smooth over economic shocks like the loss of a job. And it’s consolidating power in the hands of the nation’s billionaires, who are increasingly using their riches to purchase political influence.”

Zucman’s research comes as members of Congress and 2020 presidential candidates are pushing a variety of plans to begin reducing America’s staggering wealth and income inequality by raising taxes on those at the very top.

Warren,  who officially launched her 2020 presidential campaign on Saturday, has proposed an annual tax of two percent on assets over $50 million.

Last month, Sen. Bernie Sanders (I-VT)—who is reportedly close to announcing his 2020 candidacy—introduced the For the 99.8% Act, which would establish a 77 percent tax on all estates over $1 billion.

And Rep. Alexandria Ocasio-Cortez (D-NY) has suggested imposing a top marginal tax rate of 70 percent on those who make over $10 million.

Throughout the COVID-19 pandemic, the MAGA movement and far-right Christian fundamentalists have downplayed its severity — inspiring critics to slam MAGA as a suicidal "death cult." Christian fundamentalist Joy Pullmann, in a shocking op-ed published by the far-right website The Federalist on the day of Gen. Colin Powell's death, argues that Christians should welcome death from COVID-19, like any other cause of death, as "a good thing." And she attacks the "pagan assumptions" of those who argue in favor of widespread vaccination.

"For Christians, death is good," Pullmann writes. "Yes, death is also an evil — its existence is a result of sin. But thanks be to God, Jesus Christ has redeemed even death. In his resurrection, Christ has transformed death into a portal to eternal life for Christians…. The Christian faith makes it very clear that death, while sad to those left behind and a tragic consequence of human sin, is now good for all who believe in Christ."

For months now, Manchin has positioned himself as one of the main roadblocks of President Joe Biden's proposed Build Back Better agenda, pushing back on key provisions including child tax credits and climate initiatives.

Tell The Truth About The Coup -- Or Go Directly To Jail