No, thanks
Tag: capitol insurrection poll

The January 6 Capitol siege and voters' perceptions of what it represents have quickly become an inflection point for Americans—with Republican voters careening off the rails into a fantasy land far afield from the rest of the electorate.

New polling from Morning Consult/Politico on the insurrection inspired by Donald Trump and his supporters suggests the truth has simply proven too difficult for most Republican voters to absorb. So while nearly two-thirds of registered voters (64 percent) say Trump supporters were responsible for the attack, just 45 percent of Republicans agree (even as 80 percent of Democrats and 61 percent of independents say it was Trump supporters). Meanwhile, more than a quarter of GOP voters (27 percent) say opponents of Trump perpetrated the attack.

What is most astounding is the fact that Republican voters are now more likely to blame Joe Biden and congressional Democrats for the events that led up to the attack than Trump and Republicans in Congress. Today, 41 percent of GOP voters blame Biden while just 30 percent blame Trump, and 52 percent of Republican voters blame Democrats in Congress while just 22 percent blame GOP lawmakers. Stunning—GOP voters are more than twice as likely to blame Democratic lawmakers rather than Republican lawmakers for the events leading up to the Jan. 6 siege. 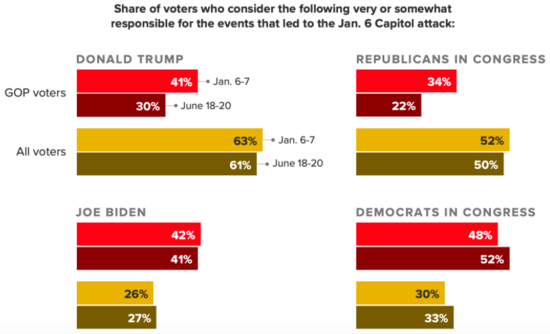 Among the broader electorate, views of who was responsible for the January 6 insurrection haven't shifted all that much, even as Republican voters became far less likely to hold Trump and congressional Republicans to account.

"What's happening isn't partisan polarization but asymmetric polarization, with Republicans separated from Democrats and independents on everything from whether the 2020 election results were legitimate, to assessments of how Trump handled and Biden is handling COVID, to views about how the economy is doing," said Amy Fried, chair of the University of Maine's political science department and co-author of a new book examining conservatives' distrust in institutions.

GOP voters are also at odds with the broader electorate on how important both January 6 and further examination of the attack are:

But even as GOP voters have decreasingly held both Trump and congressional Republicans responsible for the January 6 siege, the rest of the electorate associates the rioters with the Republican Party even more so than earlier this year. Today, a 47 percent plurality of voters overall say the people who breached the Capitol are representative of the Republican Party, up from 42 percent in January, while a meager 17 percent of GOP voters say the rioters are representative of the party.