President Donald Trump’s loyal right-wing media supporters pushed him into triggering the longest partial government shutdown in U.S. history and urged him to stick with it as Americans suffered and his poll numbers sank. When he suddenly reversed course on Friday and decided to reopen the government without receiving funding for his long-promised wall on the U.S. southern border, his propagandists split over the wisdom of the move, exposing fault lines in a group that has been cheering on his every move for years.

Some longtime Trump fans — particularly those who have been the loudest advocates for harsh immigration policies, like Lou Dobbs and Ann Coulter — are turning on the president, denouncing him for caving to congressional Democrats.

Another group of Trumpian propagandists — led by those who don’t focus on immigration policy as their top priority, including Sean Hannity and Jeanine Pirro — continues to stand by him, arguing that he simply needs more time to execute his strategy.

And a third faction isn’t taking a firm position, either arguing that it is too early to tell if the president caved or saying that he lost but deserves credit for trying.

Notably, Dobbs and Hannity, who had reportedly advised Trump on his shutdown strategy, have come down on opposite sides. On Friday, Dobbs argued that Trump’s decision was a victory for House Speaker Nancy Pelosi and “to deny it is to try to escape from reality.” Hours later, Hannity told his own Fox audience, “Anyone out there, by the way, thinking President Trump caved today, you don’t really know the Donald Trump I know. He, right now, holds all the cards.”

At times the split between the two factions has spilled over into open hostilities, with prominent conservative figures using their platforms to lash out at those on the other side.

Trump craves validation, and his worldview is shaped by the hours he spends each day tuning in to supportive cable news programs and consulting privately with their hosts. But now the message Trump is receiving is no longer unified, raising questions about how he will respond.

One of Trump’s earliest and most fervent converts, Coulter is the author of In Trump We Trust: E Pluribus Awesome and Resistance Is Futile! How the Trump-Hating Left Lost Its Collective Mind. Her virulent anti-immigrant commentary helped shape Trump’s policy and her demand that he shut down the government to get funding for the border wall helped make it happen.

She did not respond well to the news that Trump was reopening the government without obtaining wall funds, tweeting on Friday afternoon:

Good news for George Herbert Walker Bush: As of today, he is no longer the biggest wimp ever to serve as President of the United States.

She added that Trump “promised something for 18 months, and he lied about it” during an appearance that night on HBO’s Real Time with Bill Maher. Trump responded on Sunday, telling The Wall Street Journal, “I hear [Coulter’s] become very hostile. Maybe I didn’t return her phone call or something.”

The website’s obsessive focus on immigration and its support for Trump during the 2016 election helped fuel his political rise. After news broke that Trump had caved, Breitbart splashed “NO WALL” in bright red type on its front page: 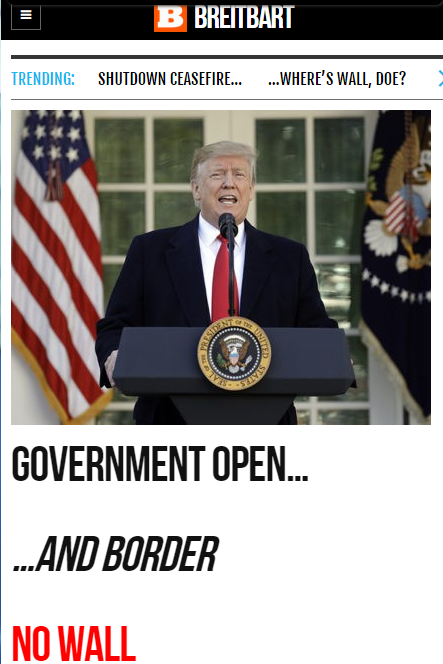 Drudge’s virulently anti-immigrant website, Drudge Report, also went all in to support Trump during the 2016 election, and his subsequent backing of the president was rewarded with an Oval Office meeting. But like Breitbart.com, Drudge Report responded to news of Trump’s cave with bright red text noting that his deal included “NO WALL FUNDS.”

Lahren parlayed Trump sycophancy into a Fox News contributor slot and a Fox Nation show. Here’s how she responded to the news:

I’m happy federal workers will be paid but @realDonaldTrump just allowed Nancy to walk all over him. It’s President Trump, not President Pelosi. Act like it. #BuildThatWall

Dobbs’ Fox Business show is characterized by his xenophobic campaign against immigrants and his frighteningly over-the-top adulation of the president. Those two factors have made his show one of Trump’s favorites and have made Dobbs one of the president’s outside advisers, including on the shutdown. Forced to decide between the two by Trump’s Friday announcement, Dobbs slammed the president, saying that “illegal immigrants are surely pleased” by the result. He later added: “This president said it was going to be conditional — border security, building that wall — and he just reversed himself. That’s a victory for Nancy Pelosi. It will be perceived as such on every television monitor and screen in the country — and to deny it is to try to escape from reality, and that we ain’t going to do here.”

I wish people would read or listen to my words on the Border Wall. This was in no way a concession. It was taking care of millions of people who were getting badly hurt by the Shutdown with the understanding that in 21 days, if no deal is done, it’s off to the races!

Hannity, who speaks with the president so frequently that White House aides reportedly call him the shadow chief of staff, took the most extreme U-turn to match Trump’s rhetoric. Last Wednesday, he argued that Trump would continue the shutdown “indefinitely.” Two days later, he said that “anyone out there” who is “thinking President Trump caved today, you don’t really know the Donald Trump I know,” adding, “He, right now, holds all the cards.”

Pirro — who has been friends with Trump for decades, has advised him privately, and produces a propagandistic show the president watches religiously — has both remained loyal to Trump and lashed out at those who do not. On Saturday’s program, while displaying a graphic of critical headlines from right-wing outlets, she claimed, “Instead of giving the president credit for recognizing the damage to this country, he was attacked by virtually everyone.” Pirro added that Trump “did not cave” but simply made “a strategy decision to pick the ground to fight on.” She also criticized Coulter for denouncing Trump.

Hegseth is a Fox & Friends Weekend co-host and sometime presidential adviser whom Trump reportedly considered for a cabinet slot.

But Pete Hegseth (from Saturday) claims that “this is not a cave, this was a recognition that the shutdown was going to end at some point” and Trump is going to declare the national emergency and win anyway. pic.twitter.com/231viyrsNX

Santorum is one of CNN’s paid Trump shills.

On CNN’s State of the Union, Rick Santorum goes in on Dobbs, saying he’s overreacting and Trump didn’t cave. pic.twitter.com/Pb7iQRjAP8

To say Trump caved, “that’s a little early, isn’t it?”

The president’s favorite show kept telling him that he was winning throughout the shutdown, and now it won’t tell him that he’s lost. As the president live-tweeted this morning’s program, co-hosts Brian Kilmeade and Steve Doocy each suggested it was too early to tell whether the president had been defeated. Meanwhile, guest Newt Gingrich went after Coulter, saying that Trump “should not pay any attention” to her:

Newt Gingrich: President Trump “should not pay any attention to Ann Coulter. Ann Coulter’s never run for office, she doesn’t know anything about how you put a majority together. She’s off here in some fantasyland where she gets to be noisy which helps her sell books.” pic.twitter.com/HF7HqJVrOJ

Coulter subsequently responded on Twitter, mocking Gingrich for his sycophancy:

Ingraham, who was reportedly considered for a White House communications role, acknowledged that the president lost but argued that he should get credit anyway.

Laura Ingraham says that Trump “did lose the shutdown fight over the wall,” but at least he was trying to help Americans, unlike the Democrats, which should “be one of the main takeaways instead of simply political winner, political loser.” pic.twitter.com/twV8SNQMFq