Trump’s Toady At Breitbart Attacks Jake Tapper, And That Should Worry Everyone

The White House communications director has changed, but the White House message remains the same. The mainstream press is still viewed as the administration’s enemy. All signs point to the conclusion that at best, the cold war between President Donald Trump and the media will continue, and at worst, we may be entering a new, darker phase where the Trump team turns individual journalists into targets, rather than raging against the press as an institution.

Anthony Scaramucci, the New York financier Trump hired last week to take over his public relations effort, said in an interview on Sunday that he wants to reboot the White House’s relations with the press and create “an era of a new good feeling with the media.” But his Friday press briefing was filled with warning signs for the reporters who cover the president, and his appearances on the Sunday morning political talk shows featured attacks on “fake news” from mainstream journalists “that do stretch stories or do fabricate things.”

Scaramucci didn’t explain what he meant by holding reporters accountable, and host Chris Wallace didn’t press him on it. But hours later, after Scaramucci faced a tough interview on CNN, Matt Boyle, a close media ally of the president, fired off a nonsensical hit piece aimed at Scaramucci’s interlocutor, Jake Tapper.

In their extensive, contentious interview on CNN’s State of the Union, Tapper grilled the new White House official on the investigation into the Trump campaign’s interactions with Russia. After one particularly heated exchange, in which Tapper asked why Trump still refuses to accept the intelligence community’s conclusion that the Russian government interfered in the 2016 presidential election, Scaramucci suggested that the press is deliberately trying to delegitimize Trump’s presidency by covering the story.

Tapper’s interview quickly drew attention from his colleagues in the press.
Numerous media outlets highlighted Scaramucci’s claim to Tapper that an anonymous person had told him that if the Russians had actually hacked Democratic Party institutions, as the U.S. intelligence community has said, “you would have never seen it.” Seconds later, after Tapper pressed him for the source, Scaramucci admitted it was Trump.

But that embarrassing incident wasn’t why Tapper’s interview drew the attention of Matt Boyle, the bombastic Trump sycophant who serves as Washington bureau chief for Breitbart.com, the conservative organ previously run by the president’s chief strategist, Steve Bannon. Boyle had been rewarded the day before by getting the first interview with Scaramucci as newly minted White House communications director. The pair spent the interview joking about a possible place for Boyle in the administration and lashing out at CNN over their “fake news.”

In a piece that reads like bad oppo used by someone more interested in nailing a political foe than considering whether his argument holds up, Boyle fixated on Tapper’s statement that he had grown up in a Philadelphia neighborhood “very similar” to Scaramucci’s. According to Boyle, Tapper had “been caught misstating his background on live television” because he “puffed up his own credentials trying to link himself back to the middle class and the working class in America — a link he does not have.” 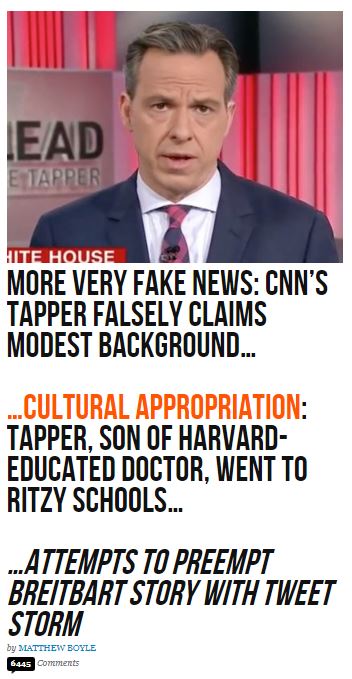 But Boyle provided no evidence that Tapper’s statement that he grew up in a middle class neighborhood was inaccurate, instead focusing on the CNN anchor’s tenure at a “private elite high school with exorbitant tuition rates” and at Dartmouth College to claim that he “is in fact an Ivy League elite.”

These facts are neither new nor contradictory. As Tapper explained on Twitter yesterday — in a thread that Boyle embedded in the article — his parents divorced when he was young, and he split time between his doctor father’s suburban home and his mother’s house in a working class neighborhood. Ignoring what Tapper actually said, Boyle suggests the CNN host is lying because Tapper’s school was expensive (notably, Boyle knows the current price of tuition, but not the price when Tapper attended decades ago). Moreover, Boyle’s attack on Tapper for attending a pricey “elite high school” downplays a key fact: The school, according to Forward, was a Jewish day school. Criticizing someone as an elite because they attended a religious school instead of a public one is a curious maneuver for a purportedly conservative outlet. (The salt-of-the-earth Scaramucci attended Tufts University and Harvard Law School before joining Goldman Sachs.)

Notably, the Boyle piece does not challenge Tapper’s reporting in any real way. It’s an attack on him, not on his work.

It’s certainly not unusual for Breitbart to attack real journalists. But was it simply a coincidence that the president’s house organ published a hit piece on a journalist who engaged in a combative interview with a White House staffer, or is there something more in play?

Earlier this month, The Washington Post reported that “Republican operatives close to the White House” are conducting opposition research on reporters as part of “what could be an extensive campaign” to discredit journalists who report on the Russia story. Feeding negative information to conservative news outlets was seen as a key part of that effort. And Tapper has long been a top target of the White House — Axios reported back in February that GOP operatives were pushing anti-Tapper hit pieces after a contentious interview with White House aide Kellyanne Conway.

The Trump administration often seems to divide reporters into two categories: the pro-Trump ones who are praised and rewarded for their loyalty, and the mainstream media “opposition party” who are often undermined and attacked.

But while the Trump White House’s attacks on the press have been a key element of his team’s messaging strategy throughout the administration thus far, the criticisms have largely targeted the institution of the media at large, or particular outlets that angered the president. (The key exception is CNN’s Jim Acosta, who challenged the president during a February press conference.) By contrast, during the campaign, Trump frequently lashed out at individual reporters by name, on Twitter and on the stump. His most prominent targets received a wave of death threats and hate mail, at times compelling them to hire security guards.

We’ve already seen cases where the press office uses its media allies to target mainstream outlets. We may be seeing a lot more of that in the days to come. If the White House and its allies begin targeting individual reporters, the consequences could be dire.

Sen. Lindsey Graham of South Carolina thought he had hit a sweet spot last month when he introduced his 15-week national abortion ban. It was something Republicans could supposedly rally around and, yet, not as repulsive as a zero-tolerance national abortion ban conservative zealots clearly want to impose on the country.

Fox News heavily promoted the U.S. Senate candidacy of former football star Herschel Walker from its earliest stages, despite Walker’s seeming lack of qualifications and well-known personal history that included multiple reports of domestic violence. Now, the network has been almost silent on the biggest story of the race so far, after The Daily Beast reported Monday night that Walker had paid for a girlfriend’s abortion in 2009, despite his current hardline anti-abortion stance.