Amid Pandemic Chaos, Burr And Graham Stand Out

North Carolina is never content playing second fiddle to any other state, for good or ill. Of course, that would be the case during a pandemic and its aftermath. A partial list: Any politicians out there being accused of taking advantage for personal gain? Check. Questions on how states will accommodate voters skittish about choosing between their health and their right to cast a ballot? Check. Fights over expanding Medicaid after a health crisis forces a hard look at who can and cannot count on insurance coverage? Check.

Oh, and a touch of Franklin Graham as a hero with reservations. Our state never disappoints.

Because one particular piece of news has been overshadowed by the increasing numbers of COVID-19 infections and deaths in the state and the nation, you might have imagined it's disappeared altogether. But not only is there an ongoing ethics investigation into stock purchases by North Carolina's senior U.S. Sen. Richard Burr, reports have revealed that other stock market dealings by the Republican and the 2017 sale of his Washington, D.C., home to a donor and lobbyist are also getting second looks.

To be fair, Burr himself has asked for a Senate Ethics Committee investigation of the stock transactions. (The Department of Justice in coordination with the Securities and Exchange Commission, reported CNN, has started its own probe.) But this was only after ProPublica reported he sold between $628,000 and $1.72 million of stock holdings while receiving classified briefings as chair of the Senate Intelligence Committee. In his defense, Burr said the sales were based not on any insider information, but on public reports at the time. 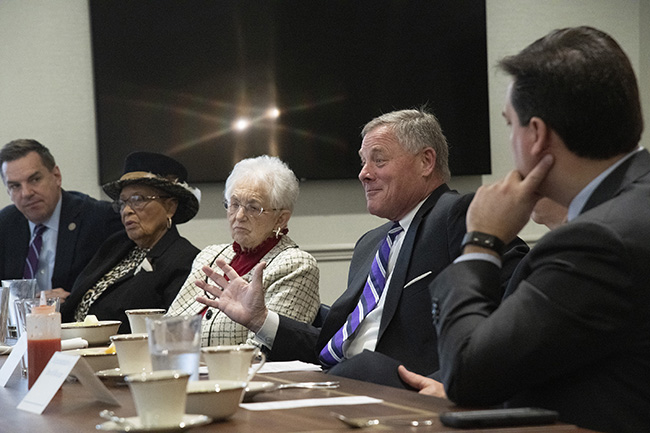 Richard Burr (right, facing camera) in a meeting at the U.S. Department of Agriculture in Washington, DC in February. (Photo by Lance Cheung/Wikimedia Commons)

The senator's own public message about the dangers of coronavirus was mixed. There was a Feb. 7 Fox News column written with Sen. Lamar Alexander (R-Tenn.) that said, "The United States today is better prepared than ever before to face emerging public health threats, like the coronavirus, in large part due to the work of the Senate Health Committee, Congress, and the Trump Administration."

Yet, in a Feb, 27 speech to "a small group of well-connected constituents," according to NPR, which obtained the audio of his luncheon remarks, Burr told members of the Tar Heel Circle: "There's one thing that I can tell you about this: It is much more aggressive in its transmission than anything that we have seen in recent history." He continued, "It is probably more akin to the 1918 pandemic." Recently, ProPublica reported the 2018 sale of interests in a small Dutch fertilizer company before a stock collapse.

Interestingly, Burr was one of only three senators who voted against the Stock (Stop Trading on Congressional Knowledge) Act of 2012, signed by President Barack Obama, which "prohibits the use of non-public information for private profit, including insider trading by members of Congress and other government employees."

Burr is not the only senator under scrutiny for stock trades, and at least the topic of the propriety of members of Congress owning and trading stocks is again a part of the conversation. Still, it would be nice if North Carolina could sit out this particular COVID controversy. Burr previously had said he will retire from politics in 2022 — probably a good idea.

The recent Wisconsin primary, held while other states postponed their own elections, was characterized by long lines, particularly in Milwaukee, the state's largest city, where only five polling places remained open, instead of the usual 180. Not coincidentally, that city is where a larger percentage of the state's minority voters live.

The Republican majority in the Wisconsin legislature had resisted calls from the state's Democratic governor to stop in-person voting, taking the matter to the courts. The Supreme Court eventually ruled absentee ballots had to be postmarked by election day, even though many voters had not received requested ballots by then. The legislature had tried to strip the powers of Democratic Gov. Tony Evers as soon as he was elected. (North Carolina Democratic Gov. Roy Cooper could relate.)

Expect more calls by Democrats across the country to make accommodations in a health crisis for mail-in and absentee ballots, and calls by Republicans with a few exceptions, to restrict them. Georgia House Speaker, Republican David Ralston, said increased mail-in balloting would be "devastating" to Republicans in his state, agreeing with the president, who mailed in his own ballot, though both also cited opportunities for fraud in their reasoning.

Several red and blue states, including Oregon, Washington and Utah, already vote by mail with few problems. And the highest profile case of absentee voter fraud actually took place in a Republican race here in North Carolina, where the 9th District U.S. House contest had to have a do-over in 2019.

That takes more than a little nerve, though it's not surprising, considering the voting rights battle has been going on in North Carolina since the U.S. Supreme Court invalidated key provisions of the Voting Rights Act of 1965 in its 2013 Shelby County v. Holder ruling. The latest voting law is still mired in the courts, which blocked its implementation in this year's primary.

You would think state Republicans would have given up after a federal court declared an earlier version of the bill targeted African-American voters with "almost surgical precision." You would be wrong.

Another continuing fight that the coronavirus pandemic has laid bare has been over the expansion of Medicaid. So many of the states now feeling the strain of an overloaded health-care system, with many of the uninsured or underinsured reluctant to seek care, have been in the South. The resistance of Republican leadership has stalled the move and the state budget even as Kansas — yes, Kansas — has moved toward a compromise on the issue.

At least North Carolina's Franklin Graham has reached across state lines to offer assistance in the epicenter of the virus, in the form of a Central Park field hospital associated with his Samaritan's Purse. But there is a catch: protests and pushback over a statement of faith many of its contractors and some full-time volunteers must sign stating, "We believe that marriage is exclusively the union of one genetic male and one genetic female." On his Facebook page, Graham called critics, which included members of Congress, "tone deaf." 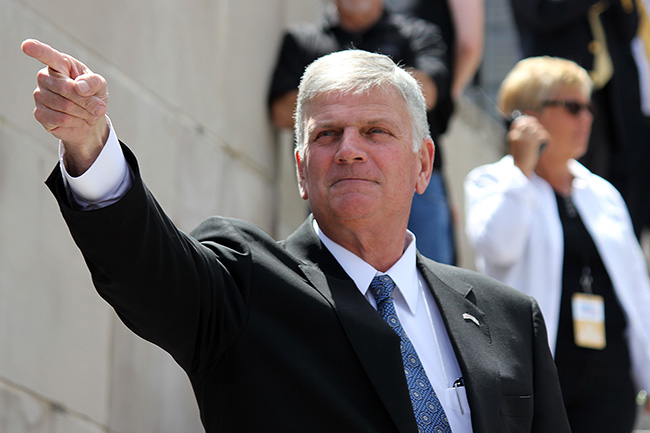 Another North Carolina-based minister, the Rev. Dr. William J. Barber II, in a wide-ranging interview I conducted for a TIME Magazine profile, did not mention Graham in particular. But during our conversation, Barber, a leader of the Poor People's Campaign: A National Call for a Moral Revival, criticized "religious nationalism" and the narrative "that says the only moral issue today is not poverty and dealing with racism but being against gay people, being against women's right to choose, being for guns being for tax cuts and being for prayers in the schools."

Yes, North Carolina, and its people, can also surprise you.

Mary C. Curtis, a columnist at Roll Call and a contributor to WCCB-TV and WFAE, has worked at The New York Times, The Baltimore Sun, The Charlotte Observer, as national correspondent for Politics Daily, and is a senior facilitator with The OpEd Project. Follow Mary on Twitter.

From Your Site Articles
Related Articles Around the Web
north carolina

The July 28 Fox News poll showed that Fetterman has an 11-point lead over Oz. Additionally, according to the poll, “just 35 percent of those backing Oz say they support him enthusiastically, while 45 percent have reservations. For Fetterman, 68 percent back him enthusiastically and only 18 percent hesitate.” These results, combined with data showing that Fetterman is outraising and outspending Oz, could spell disaster for the GOP hopeful. However, since this polling, Fox has demonstrated it’s a reliable partner to help Oz try to reset the race.

For decades, abortion was the perfect issue for Republicans: one that they could use to energize "pro-life" voters, and one that would be around forever. What's more, they ran little risk of alienating "pro-choice" voters, who had little concern that the GOP would ever be able to repeal abortion rights.

Key to this strategy was the assumption that the Supreme Court would preserve Roe v. Wade. GOP candidates and legislators could champion the anti-abortion cause secure in the knowledge that they would not have to follow through in any major way. They could nibble away at abortion rights with waiting periods and clinic regulations, but the fundamental right endured. And their efforts were rewarded with the steadfast support of a bloc of single-issue voters.