Saturday marks the two-year anniversary of an interview with Donald Trump at the World Economic Forum following the announcement of the first case of “novel coronavirus” in the United States. Asked if he was worried about a pandemic, this is how Trump replied:

Trump then went on to brag about his “great relationship” with Communist Party boss Xi Jinping. That first statement was just one of many that would come over the following months as Trump repeatedly downplayed the threat posed by the SARS-CoV-2 virus. 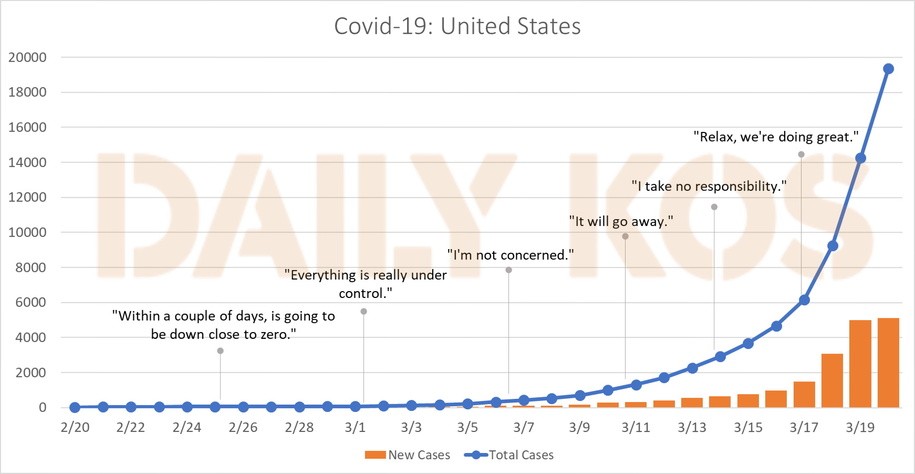 This weekend in Washington D.C., there will be a gathering that’s estimated to draw over 10,000 people. These people will not be there to mourn the 887,000 known to have died from the virus in the United States. They won’t be there to celebrate the advances represented by the vaccines, or to call for protections against a wave of viruses that represents a growing threat to children. Instead, they’ll be there to carry on Trump’s legacy—downplaying the pandemic, touting false cures, and undermining science. And, of course, they organized this action using the site that, throughout the pandemic, has provided a welcome home to conspiracy theories and harmful claims: Facebook.

As NBC News reports, this weekend has been marked out for an anti-vaccine protest in Washington. That, of course, includes a featured role by Robert Kennedy Jr., who is currently suing Daily Kos in the attempt to dox an anonymous poster, along with his badly misnamed “Children’s Health Defense Fund.” Kennedy’s group will gather with other like-mindless groups and individuals — thanks to their ability to organize on a platform that continues to provide a centralized meeting place for misinformation and disinformation while churning out a pretense of action.

“The rally has been largely organized on Facebook and some extremist internet forums, and organizers have raised at least $200,000 on a crowdfunding site. Some nearby hotels in Virginia are sold out ahead of the event, according to the event’s organizers, who are arranging last-minute travel plans for latecomers.”

Really, that should be Facebook and other extremist internet forums.

Key speakers include Dr. Robert Malone, a frequent guest on Joe Rogan’s anti-science podcast where he has advocated the use of an ineffective anti-parasitic drug, ivermectin, Kennedy’s group is bringing along their own set of pet quacks who are not just pushing ivermectin, but also the long disproven hydroxychloroquine.

It’s not quite been two years since Trump began pushing hydroxychloroquine as a “miracle” cure for COVID-19. Between March and November of 2020, Canadian researchers tried to put a value on the damage Trump had done by pushing an anti-malarial drug to treat a viral disease. In just the eight months they covered, that damage was significant. Because people were not just listening to Trump’s advice on false cures; due to the concern everyone had about COVID-19, these claims got three times the audience of Trump’s usual disinformation.

“From March 1 to April 30, 2020, Donald J Trump made 11 tweets about unproven therapies and mentioned these therapies 65 times in White House briefings, especially touting hydroxychloroquine and chloroquine. These tweets had an impression reach of 300% above Donald J Trump’s average. Following these tweets, at least 2% of airtime on conservative networks for treatment modalities like azithromycin and continuous mentions of such treatments were observed on stations like Fox News. Google searches and purchases increased following his first press conference on March 19, 2020, and increased again following his tweets on March 21, 2020. The same is true for medications on Amazon, with purchases for medicine substitutes, such as hydroxychloroquine, increasing by 200%.”

Over the course of his remaining time in office, Trump took up the cause of other fake cures, including suggesting the possibility of injecting disinfectants and somehow getting sunshine inside affected people. As a direct result of these pushes from Trump and others on the right-wing, people have been poisoning themselves with colloidal silver, inhaling bleach, drinking absolutely toxic Miracle Mineral Solution, flooding poison control centers with overdoses of ivermectin, and downing fatal doses of hydroxychloroquine.

In the last two years, Republicans have discovered a very special way to get people to sign onto a regressive agenda — the power of greed. Whether it’s offering people the chance to collect a bounty on women seeking an abortion in Texas, or Florida pushing a bill that allows anyone to sue teachers over claims that their teaching is “woke,” Republicans have learned that dangling a chance to collect big bucks is the key to getting people stoked about the opportunity to finger Goody Bishop.

Democrats might want to consider harnessing that power. How about a law that allows people to sue anyone — especially if that anyone calls themselves “doctor” — who pushes harmful, disproven medical advice on television, podcasts, or social media?

From Your Site Articles
anti-vaxxers