Congressional negotiators announced on Monday night that they had reached a tentative deal on spending legislation that would avoid another partial government shutdown when current funding expires on Friday. The group hopes its compromise, which includes $1.375 billion for physical barriers and a 17 percent reduction in beds for Immigration and Customs Enforcement, will satisfy President Donald Trump’s immigration policy demands while still maintaining enough Democratic support to pass the House of Representatives.

The negotiators represent both parties and both houses of Congress and say they received approval from congressional leaders and consulted with the White House throughout the process. But they did not run the proposal past the president’s influential Fox News cabinet, and now several of Trump’s leading propagandists are publicly weighing in and urging him to scuttle the deal. Their pleas could determine the response from Trump, who has yet to indicate whether he will support legislation that gives him much less in barrier funding than he has demanded.

Shortly after news of the deal broke, Sean Hannity briefly cut away from airing Trump’s rally in El Paso, TX, to issue a stern warning to congressional Republicans. Denouncing the proposal for providing too little funding for a border wall, he said that “any Republican that supports this garbage compromise, you will have to explain.”

The Fox host holds enormous sway over the president, who consults with him so frequently that White House aides have termed the Fox host his shadow chief of staff, leading conservative commentator Charlie Sykes to describe this response as “the Hannity veto.”

Fox Business host Lou Dobbs, another favorite of the president who, like Hannity, reportedly advised Trump on his shutdown strategy, has also denounced the proposal. “Radical Dimms refuse to protect America, their ‘Deal’ is an insult to [Trump] and the American people,” he tweeted late Monday night.

Dobbs and Hannity have for weeks been urging Trump to declare a national emergency in order to obtain funding for the border wall, even as Republican congressional leaders warn him away from the tactic. The White House is reportedly still considering ways to divert appropriated but unspent funds to the border wall, whether Trump takes the deal or not and with or without an emergency declaration.

Fox host Laura Ingraham, an anti-immigration hard-liner whom the president reportedly considered for a White House job, has also criticized the “pathetic” deal.

Trump’s Fox advisers are not universally opposed to the spending proposal. The hosts of Fox & Friends opened Tuesday’s show by suggesting that the president accept it, spinning the deal as a win for Trump. Co-host Steve Doocy also said, “I bet he’s got something else up his sleeve,” adding that Trump could “legally reprogram” other funds to build the wall without declaring a national emergency. 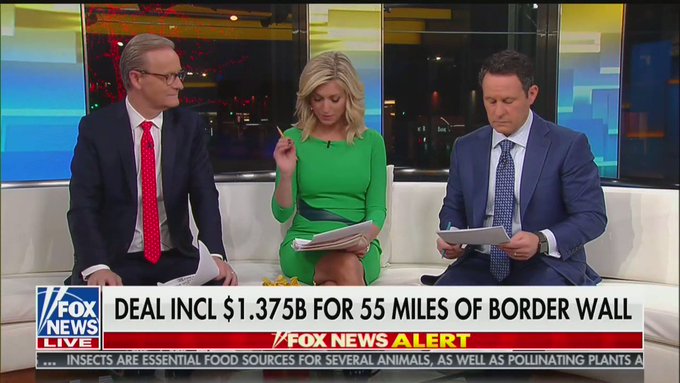 Trump craves validation from the people he watches on TV most days, giving these propagandists an outsized impact over whether the government shuts down again this week.

By Steve Holland and Kanishka Singh

WASHINGTON (Reuters) -The White House is seeking to improve President Joe Biden's low approval ratings by launching a campaign to highlight some of the recent key policy wins by the administration ahead of the November midterm elections.

Donald Trump has invoked his Fifth Amendment right to remain silent in a civil case, and if he ever stands trial on criminal charges, neither a judge or a jury may take that as evidence of guilt. But in the court of common sense, we are entitled to reach the obvious conclusion: Trump has committed crimes and wants to keep them secret.

Man Kills Himself After Crashing Car And Firing Gunshots Near U.S. Capitol

Listen: Boebert's Neighbors Called Sheriff After Confrontation With Her Husband

O.J. Trump And The Mar-A-Lago 'Plant'