House Chaplain Will Stay — After Sending Tough Letter To Ryan

Conroy says that he never spoke to Ryan about his resignation or termination but that his chief of staff Jonathan Burks requested that the chaplain step down. Asked why, Burks reportedly responded, “Maybe it’s time we had a chaplain that wasn’t a Catholic.” Burks also reportedly mentioned a prayer Conroy led in November 2017 ahead of the tax reform vote.

The chaplain had prayed for “balanced” tax reform that helps ameliorate income inequality. The tax bill that Republicans eventually passed added more than an estimated $1 trillion to the deficit while delivering the largest gains to wealthy people and corporations.

Conroy writes that he initially felt that he had “little choice” but to resign, but he now says that he would like to return to work unless fired “for cause.” He notes that though Ryan said Conroy’s “pastoral services” had been insufficient as the reason for his departure, the chaplain says he was never given any indication that he wasn’t living up to his duties. If he had been instructed on how he was failing or where he could improve, he says, he would have worked to correct his conduct.

In a statement, Ryan said he has accepted the letter and that Conroy will remain as chaplain. He said, “My original decision was made in what I believe to be the best interest of the institution. To be clear, that decision was based on my duty to ensure that the House has the kind of pastoral services it deserves.” 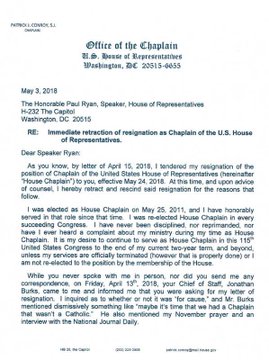 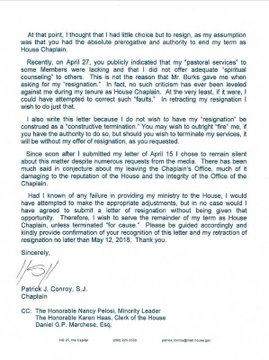 The New York Times Serves Up Another ‘Both Sides’ Fiasco

The New York Times Serves Up Another ‘Both Sides’ Fiasco