After reports surfaced on September 5 that Corsi had been subpoenaed to appear before a grand jury convened by Mueller, Infowars used its website and social media account to signal how Corsi should testify. The since-suspended Infowars Twitter account tweeted on September 5, “Want to know what former InfoWars DC bureau Cheif (sic) Jerry Corsi will tell Mueller’s grand jury?” The tweet linked a 2017 Infowars article authored by Corsi that attempted to defend Donald Trump confidant and Infowars host Roger Stone — who is also embroiled in the Mueller investigation — against accusations that Stone was involved in the release of emails that Russian intelligence officers stole from Clinton campaign chair John Podesta. The implicit suggestion of the tweet was that Corsi, a former Infowars employee, should give testimony absolving Stone, a current Infowars employee, of any wrongdoing.

The Infowars tweet presaging Corsi’s testimony echoed a tactic employed by President Donald Trump during Mueller’s investigation. On December 3, Trump tweeted: “‘I will never testify against Trump.’ This statement was recently made by Roger Stone, essentially stating that he will not be forced by a rogue and out of control prosecutor to make up lies and stories about ‘President Trump.’ Nice to know that some people still have ‘guts!’” 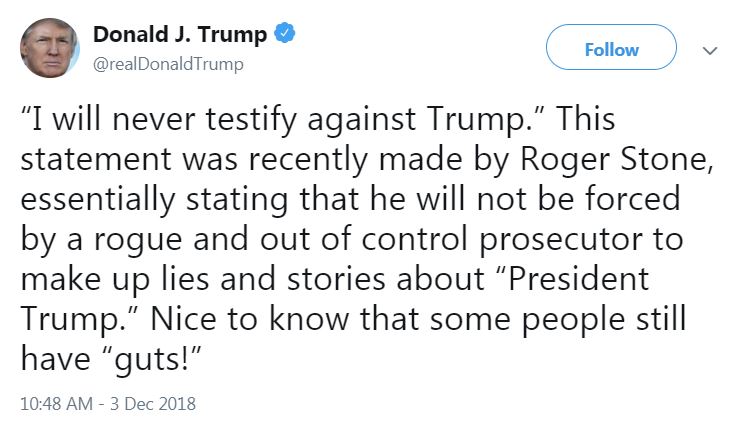 Later, as Corsi’s legal woes increased — beginning in November when Corsi said he expected to be indicted — Infowars turned on him and labeled him a traitor, with Stone driving the majority of attacks.

In evaluating the conflict between Infowars and Corsi, it’s hard to know whose claims about the hacked emails to believe — if any — because the major players are all inveterate liars. But it’s clear that after trying to play nice with Corsi, Infowars has taken out its knives.

How Corsi and Stone got tangled in Mueller’s investigation

Corsi and Stone are both reportedly under investigation by Mueller’s team for the same reason. On October 7, 2016, WikiLeaks released emails stolen from Podesta just hours after news broke of a 2005 recording in which Trump bragged about sexually assaulting women. According to U.S. intelligence agencies, the emails were hacked by individuals working on behalf of the Kremlin. Part of Mueller’s investigation is to determine if Trump associates colluded with Russia, and Corsi and Stone’s contacts with WikiLeaks in 2016 have brought them both under scrutiny. Stone, who testified about WikiLeaks before a closed session of the House Intelligence Committee in September 2017, has denied having knowledge of the hacked emails before they were released, but he has also offered an ever-changing story in public remarks about what happened in 2016. Corsi is under investigation because Mueller reportedly has emails suggesting that he served as an intermediary between Stone and Wikileaks.

Corsi, a conspiracy theorist best known for driving the “birther” smear about President Barack Obama that Trump later championed, joined Infowars as the outlet’s Washington, D.C., bureau chief on January 30, 2017. Corsi had spent years working at conspiracy website WND, and he was friendly with Infowars prior to joining the outlet. (For example, a July 2015 Infowars article references an appearance Corsi made on The Alex Jones Show in support of then-candidate Trump.)

Corsi’s role with Infowars helped the fringe outlet gain additional access within the Trump administration. In May 2017, Infowars announced that Corsi had been granted temporary credentials to attend press briefings at the White House, and controversy quickly erupted because of the outlet’s history of pushing conspiracy theories about the 2012 Sandy Hook mass shooting and numerous other tragedies. Sure enough, on May 22, 2017, Corsi broadcast live from an empty James S. Brady Press Briefing Room and discussed his hopes of obtaining a permanent pass. Infowars founder Alex Jones, clearly pleased with the imbroglio, told his listeners that the press pass wasn’t that important because “most of the meetings don’t happen at briefings, they happen at dinners, like he was at one with the vice president a few nights ago,” adding, “Oop, maybe I’m not supposed to say that.”

In March 2018, when Corsi still worked at Infowars, he threw a major on-air tantrum about Mueller. Corsi was upset about reports that the FBI had recently detained and questioned Ted Malloch at the direction of Mueller’s team. Malloch, an informal Trump campaign adviser and frequent Infowars guest, was reportedly questioned about Stone and about WikiLeaks’ release of the hacked Podesta emails. (When Malloch was detained, Infowars called him an “Infowars Correspondent” in an article.)

Corsi repeatedly tweeted about the detention on March 28 and 29, writing that he was going to “POUND” Mueller, claiming, “MUELLER in PANIC MODE grabs Ted Malloc (sic),” and writing that he was joining an “EMERGENCY BROADCAST” on Infowars to talk about the detention. In an appearance on the March 29 broadcast of The Alex Jones Show, Corsi challenged Mueller to a fistfight, saying, “I’m fed up with this. I want to say to Mueller, let’s go out in the backyard of the Justice Department. You got to have some — let’s duke it out. I mean, you want to behave like a thug? … Well this is what you deserve.”

Perhaps it was Corsi who was in “PANIC MODE.” In November, it was revealed that Mueller is in possession of emails that suggest Corsi and Stone knew that WikiLeaks had Podesta’s stolen emails before they were released. Stone emailed Corsi in 2016 telling him to “get to” WikiLeaks founder Julian Assange, and Corsi forwarded the message to Malloch before later reporting back to Stone to share what he said Assange’s future plans were.

A January 17 Infowars article claimed that Corsi was dismissed by the outlet in June 2018 “because of his failure to adequately establish a Washington bureau, his failure to maintain White House press credentials, and his generally poor work performance.” The article further claimed that “The Washington Post is set to publish a false story claiming that Jerome Corsi was hired by Infowars at the behest of Roger Stone as part of a ‘hush money’ operation and that this is a line of inquiry for the Mueller investigation into Russian collusion.”

Infowars’ response to the September 5 report that Corsi had been compelled to testify could easily be interpreted as an attempt to influence Corsi’s dealings with Mueller’s team. The since-suspended Infowars Twitter account tweeted on September 5:

The tweet linked to an Infowars.com article authored by Corsi and published in March 2017, which denied that Stone had anything to do with WikiLeaks’ release of hacked emails.

Then on September 12, Infowars published a video with the headline “What Will Jerome Corsi Tell Mueller’s Grand Jury?” that teased Stone’s appearance with “Alex Jones live via Skype to discuss former Infowars Bureau Chief Dr. Jerome Corsi’s upcoming testimony before Special Counsel Robert Mueller’s grand jury.” In the video, both Jones and Stone claimed that they had not spoken to Corsi since Mueller subpoenaed him. Stone went on to say that if Corsi testified “truthfully,” it would be “entirely exculpatory” for him “because you see it was Dr. Corsi who educated me to the fact that Tony Podesta along with his brother John were deeply involved in Ukraine.” Stone’s reference to Podesta and Ukraine is an attempt to argue that his infamous August 2016 tweet that “it will soon the Podesta’s time in the barrel” was not a reference to having foreknowledge of the hacked emails, but instead referred to a different matter. As with the September 5 Infowars tweet, the article and video appear to pressure Corsi to testify in a certain way about Stone.

As Corsi’s legal troubles worsened over the following months — on November 26, Corsi said he would reject a plea deal from Mueller, and in January, it was reported that several Corsi associates, including his stepson, had also been subpoenaed — Infowars turned on its former Washington, D.C., bureau chief. A search of Infowars.com shows headlines about Corsi began to take on a more negative tone in November (i.e., “Explosive! Roger Stone Responds To Corsi’s Flip-Flop Concerning Working With Assange”).

In January, Infowars has turned up the heat even more. On January 2, it published an article with the headline “Roger Stone Believes Jerome Corsi Works for Mueller,” and on January 17, it posted an article titled “Roger Stone Explains His Beef With Jerome Corsi and Larry Klayman.” The outlet also promoted a video where “Roger Stone calls out Jerome Corsi for lying about fabricating a cover story together to hide foreknowledge of Wikileaks publishing of the Podesta emails.”

Here’s a list of all the Infowars headlines and subheads mentioning Corsi since September: 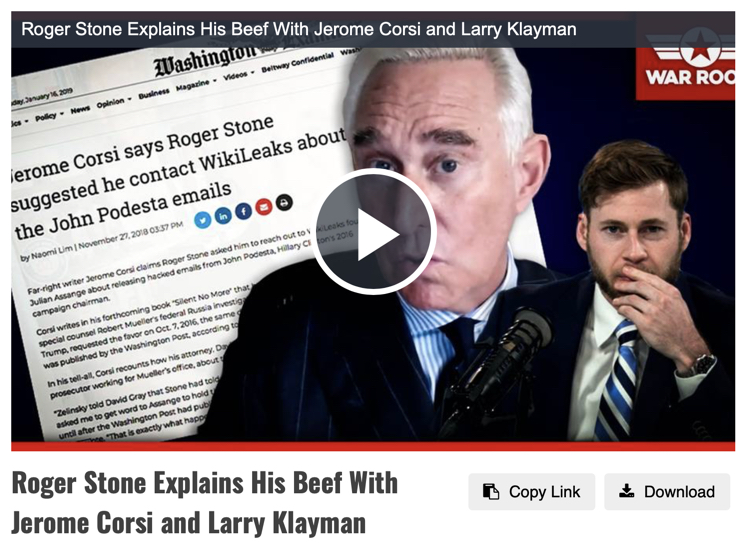 Infowars broadcasts have followed a similar pattern; the January 2 broadcast of The Alex Jones Show was advertised with the tagline: “Joining today’s broadcast is Roger Stone breaking down what he calls the ‘treachery’ of Dr. Jerome Corsi.”

Jones set up Stone’s appearance by making a number of very personal attacks on his former employee Corsi. He began by claiming that “I don’t go after Corsi with any pleasure” before saying that he fired Corsi after encountering him at a Washington, D.C., restaurant “drunk off his ass.” Jones also said that Corsi started “talking massive crap about me, Roger, everybody” at the restaurant, that Corsi is a “lunatic,” that he is “like fruit, his expiration date has hit,” and that he has no respect for Corsi.

For his part, Stone said that Corsi “was perfectly willing to bear false witness against me on multiple points that are complete fabrications.” Jones ended the segment with a rant, screaming, “I will not sit there and watch some piece of crap Russian agent like Mueller accuse [Stone] and me of being goddamn — I said I wouldn’t do it, lord, I apologize — accuse me of something I haven’t done. I’m sick of it.”

While America copes with the chaos unleashed by Republicans in Congress, the Twitterverse has for weeks been plagued by a cascade of election fraud falsehoods obstinately disseminated by failed Republican gubernatorial candidate Kari Lake and repeatedly rejected in court.