As Politico reported Sunday night that Donald Trump was planning to end DACA on Tuesday morning, immigration advocacy groups sprang into action, planning rallies. Though it was Labor Day weekend, and the reports were not definite, too much was at stake.

Yatziri Tovar, a member of immigrants’ rights group Make the Road New York and a DACA recipient, said in a statement, “DACA has changed my life drastically, including being able to obtain a New York State ID and being able to work and graduate college. If DACA is taken away, I don’t know what I will do. I’m working two jobs to supporting my family.”

The news wasn’t a surprise. As Angel Padilla, policy director of Indivisible, a major anti-Trump resistance group, said in a statement, “Trump’s announcement was not made in a vacuum. Consider the events of the past few weeks: Trump equivocated on the evils of white supremacy; pardoned a racist former sheriff who routinely profiled Latinos; banned transgender Americans from serving in the military; and reinstated a program transferring military-grade weapons and gear to local police forces. Trump’s decision to eliminate DACA is part of his broader agenda to take our country back to an era where members of historically marginalized groups had fewer rights and protections.”

Unfortunately for the approximately 800,000 Americans protected by DACA, the planning by activists ahead of Trump’s decision was all too necessary. At 11am Tuesday, Attorney General Jeff Sessions announced the program would no longer be accepting applications.eee

In Washington, D.C., hundreds of DACA recipients and allies shouted “shame” in front of the White House shortly before 11am. When Sessions made the announcement a few blocks away, participants began marching toward the Department of Justice, according to a report in the Washington Post.

Others remained in front of the White House, as national immigrant rights organization United We Dream livestreamed from its Facebook page.

In Denver, students around the city staged walkouts in solidarity with DACA recipients. 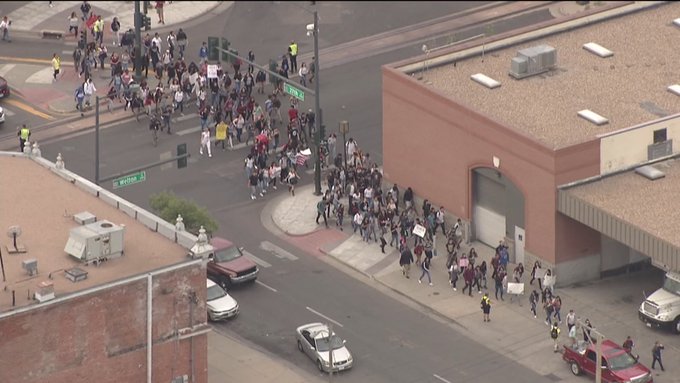 #Breaking: Students at Denver schools are walking out of classes in protest of #DACA announcement.

The battle to defend DACA will be fought on multiple fronts, not onlyeee through street protests and rallies, but also in Congress and the courts.

Ilana Novick is an AlterNet contributing writer and production editor.