The underdogs are falling behind in two closely watched elections in Texas, according to a new University of Texas/Texas Tribune poll. 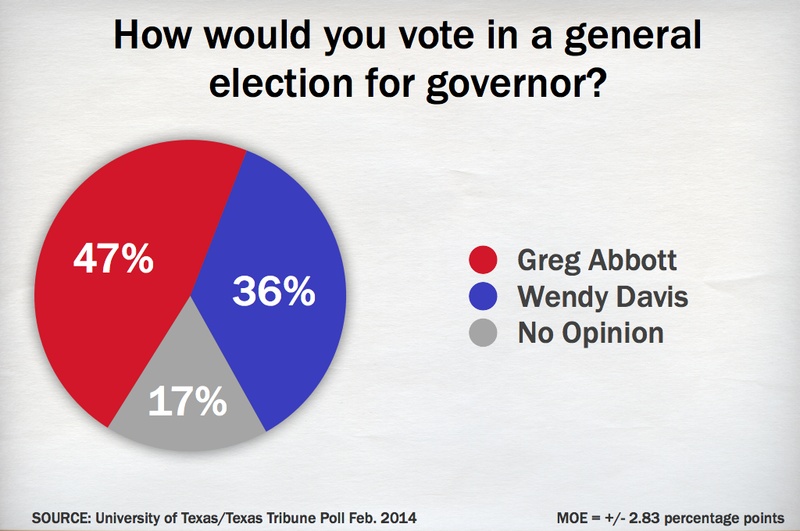 Both Abbott and Davis are expected to easily win their respective primaries on March 4, setting up a blockbuster general election matchup. Davis has become an instant superstar on the left — and a pariah on the right — in the wake of her memorable 14-hour filibuster of an anti-abortion bill. Abbott has long been considered the heir apparent to Texas governor Rick Perry, and his $29.4 million war chest leaves him among the most cash-flush candidates in the nation.

Abbott’s 11 percent lead is up from 6 percent in October’s UT/Texas Tribune poll, perhaps reflecting the rocky launch of Davis’ gubernatorial campaign. In January, the Dallas Morning News published an article raising questions about Davis’ inspiring life story, leading to a torrent of criticism from Republicans.

The poll also questioned voters on Texas’ Senate race, in which Minority Whip John Cornyn (R-TX) is seeking a third term in office. Cornyn is facing an insurgent challenge from U.S. Rep. Steve Stockman (R-TX), but the Tea Party-backed challenger is gaining very little traction. According to the poll, Cornyn leads Stockman 60 to 16 percent, with six other candidates trailing in the single digits. Among likely Republican primary voters, Cornyn’s lead is 62 to 16 percent. Either result would be enough for Cornyn to win the primary outright on March 4, and avoid a May 27 runoff.