Mike Pence should never again write an editorial. Not only would that provide some relief for a nation that has absorbed just about every sentence on Donald Trump's "leadership" that it can tolerate, but Pence's recent editorial in the Wall Street Journal appears to have pulled off the rare reverse-Cassandra: Everything Pence said was going to happen, has already fallen apart. For example, there was this sequence: "Cases have stabilized over the past two weeks, with the daily average case rate across the U.S. dropping to 20,000—down from 30,000 in April and 25,000 in May."

On the day Pence wrote that, cases topped 25,000 for only the second time in two weeks. The next day, they topped 26,000. The next day, they touched 28,000. And on Friday, new cases of COVID-19 in the United States were at 33,300. That's the highest number of new cases since May 1. It's also a solid signal that the benefits of the temporary lockdowns have been expended. The pandemic is once again resuming an exponential march toward ever-greater numbers.

Florida has broken their record again on Saturday, with 4,049 cases. Texas has not yet given a final figure.

Back in March, after weeks of foot dragging and denial, Donald Trump and other Republican leaders finally jumped when confronted with charts laying out the expected numbers of dead from an unchecked epidemic in the United States. Trump never became energized enough to actually do anything, like call on governors for a coordinated national stay-at-home order, or institute a federally-managed system of testing and case management. But at least, for a short time there, Trump stood aside long enough for a medical professional to reach the White House microphone and encourage people to take precautions.

But that was then. After repeated exposure to evidence that Donald Trump was going to kill well over a hundred thousand Americans, Republicans haven't just become inured to the idea of the worst disaster in over a century, they've already declared it a win, and done, no do-overs. Trump has already declared there will be "no more shut downs," and Republican governors have taken that to heart. Even in states like Texas and Florida, which yesterday achieved a 1-2 position at the top of the chart for new cases, there's no sign that anything like sensible action is at hand.

On Friday, Texas racked up 4,497 confirmed cases of COVID-19. That's not just more than double the numbers from a week earlier, it even beats out the previous high number that Gov. Greg Abbott blamed on prisons and nursing homes bundling old results. Abbott's biggest achievement on Friday was once again declaring that he would not remove an executive order that keeps cities and counties from creating local mask mandates. However, earlier in the week he did support keeping restrictions on the southern U. S. border to prevent transmission of COVID-19. Which is probably a good idea. For Mexico.

Florida counted 3,822 new cases on Friday. That's 600 cases more than the previous high … which was on Thursday. As in Texas, the number of daily cases being reported in the state is now 200% the numbers from a week earlier. But rather than announce any new precautions, Gov. Ron DeSantis took a break from earlier excuses to blame roaming bands of watermelon-picking Hispanics for the state's surge. It would be hilariously racist if it wasn't also true. Making it much less hilarious, and infinitely more racist.

Texas and Florida have come up in discussions of COVID-19 several times this week not just because outbreaks there are solidly back on the upward arc that was in place before the first social distancing measures were taken. What's making both states notable is a third state: The state of denial. It might be possible to say that Abbott and DeSantis are caught between their knee-jerk determination to please Trump and the health of their citizens, but they're not. Because the health of their citizens is not a factor. Both men are going to ridiculous lengths to demonstrate that they will not pull the fire alarm, even when the smoke is everywhere.

Texas is now the fifth highest state in overall cases of COVID-19. Florida is close behind at number seven. And both are now far outpacing the results from states like New York, New Jersey, and Connecticut that formed the first flank of the U. S. epidemic. In fact, none of those states have seen numbers like those in Florida and Texas since the first week of May.

The amazing graphic from The Washington Post, showing how red states have taken over as the chief location of new cases, does not even include the data from the last half of this week. 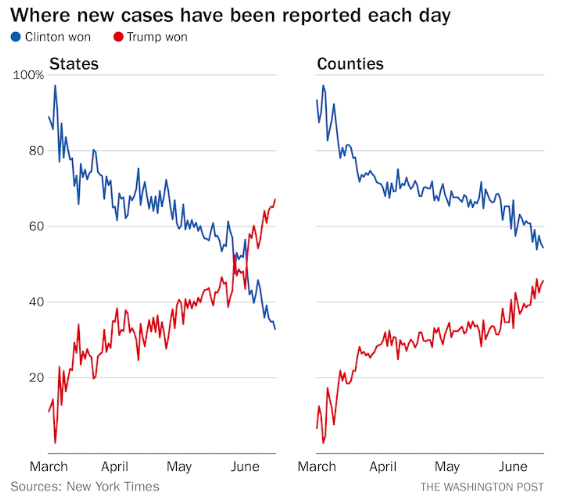 Texas and Florida are not alone in driving the "red tide" of new cases. On Friday, Arizona reported 3,246 new cases. That number (say it with me now) is double what the state was reporting a week ago. However, that state's Republican governor, Doug Ducey, allowed at least a modicum of reason to slip in when he announced that he was rescinding his earlier order and would allow cities and localities to create mask mandates.

The far-too-rapid reopening of America, followed by the refusal to mandate masks or enforce social distancing, is the reason that the lines in this other Washington Post chart are so distinct. 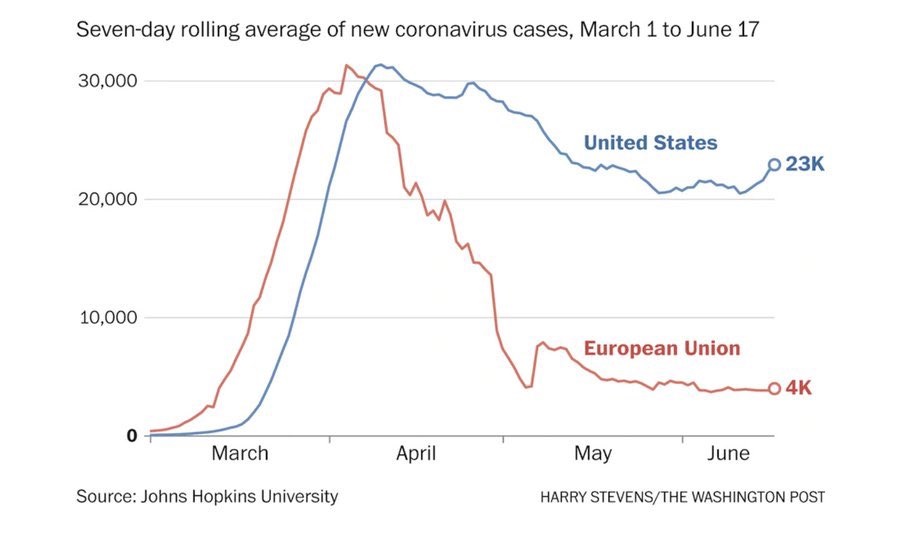 In March, as cases in Italy and Spain exploded, then spilled over into other European nations, the word was always that the United States was "two weeks behind." But that period is long over. By strict, nation-wide application of social distancing guidelines, extended lockdowns, and far more use of masks, the nations of the European Union have turned the COVID-19 pandemic into something that both their citizens and their economies can tolerate until a vaccine or effective treatment is available.

But in the United States … roll tide.

From Your Site Articles
Related Articles Around the Web
coronavirus