How Trump's Media Pals Struggled With His ‘Bleach Injection’ Blather

During a coronavirus press conference, President Donald Trump suggested that injecting disinfectant into people could be a potential treatment for COVID-19. This is false; disinfectants are not meant to be consumed by humans in any way, and Trump arguably clarified later that he wasn't talking about a physical injection. The initial comment prompted outcry from medical experts and media figures, and the disinfectant brand Lysol issued a statement warning against internal use of its products. While some in right-wing media admitted that Trump said what he said, others mounted an uncoordinated campaign to make some sort of sense of the president's displayed ignorance.

At the briefing, Department of Homeland Security official Bill Bryan made several comments about research indicating that "heat and humidity suppress COVID-19" and "commonly available disinfectants work to kill the virus." Then, Trump took the stage and delivered the following comment:

Several conservative outlets, such as the Washington Examiner and the Daily Caller (which called it a "hypothetical") admitted that Trump did in fact suggest injecting disinfectant to fight coronavirus. Fox & Friends co-host Steve Doocy and Fox chief White House correspondent John Roberts also admitted on-air that Trump suggested using something poisonous inside the body and that people should not do it.

However, not all of right-wing media is so upfront about what Trump said. The Fox News website ran an article with the headline "Media erupt over Trump comments on disinfectant and sunlight to cure coronavirus: Here's what he said," suggesting that mainstream media is taking Trump out of context. The lede claimed that Trump "appeared to suggest" injecting disinfectants and the author waited until the 13th paragraph to confirm that Trump "did suggest" doing so, while claiming he "made clear it was not a definitive recommendation."

Fox's website featured the article with the phrase: "TWISTED WORDS?" 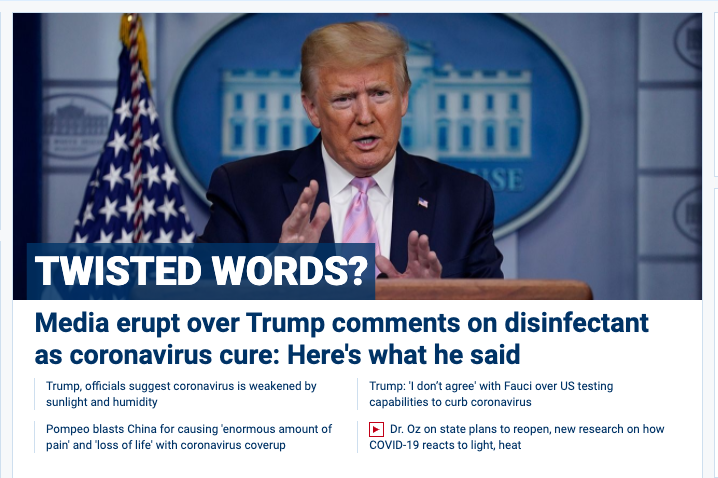 On his radio show, MSNBC's Hugh Hewitt attacked the media for "abusing ... Trump's comments on ultraviolet light" because "he didn't say what they say he said." Hewitt also promised to never buy Lysol products again, due to the company's statement against internal use of its products.

Hugh Hewitt: "I am never buying Lysol again" after spokesman's statement against Trump comments. "That's not what the president said."

Ben Shapiro's The Daily Wire took a much harder line, posting a "FACT CHECK" that claimed "Trump did not tell people to 'inject themselves with disinfectant' or 'drink bleach.'" The article focused on DHS official Bill Bryan, who spoke before Trump did, euphemistically using the word "inject" and saying, in the article's words, that "when they 'inject' UV rays into the mix along with high temperatures and increased humidity, ...the virus dies quickly."

The Daily Wire blockquotes Trump's comments, but fails to address the part that shows his suggestion to inject disinfectant. Instead, the article tries to suggest that Trump and Bryan were talking about the same UV light topic all along, focusing on Trump "later rais[ing] the possibility of whether UV rays could kill the coronavirus if it was on a person's skin." The article does not mention that excessive UV light exposure causes skin cancer.

Breitbart took a similar line to that of The Daily Wire, ludicrously claiming in its "fact check," that "Trump used the word 'inject,' but what he meant was using a process — which he left 'medical doctors' to define — in which patients' lungs might be cleared of the virus, given new knowledge about its response to light and other factors. … At no time did Trump actually propose injecting patients with disinfectant."

Podcast host and coronavirus truther Bill Mitchell, however, had perhaps the most incredible take of all.

The day after his initial comments, Trump claimed that he had asked "a very sarcastic question," "just to see what would happen."

This excuse only raises questions about the very nature of these briefings.

Seven or eight months ago, many Democratic strategists feared that the 2022 midterms would bring a massive red wave like the red waves that plagued President Bill Clinton in 1994 and President Barack Obama in 2010. But that was before the U.S. Supreme Court’s radical-right majority handed down its decision in Dobbs v. Jackson Women’s Health Organization and overturned Roe v. Wade after 49 years. Senate Minority Leader Mitch McConnell still believes that Republicans are likely to “flip” the U.S. House of Representatives, but he considers the U.S. Senate a toss-up.

Newly-minted Supreme Court Justice Ketanji Brown Jackson will join the court — the first Black woman to do so — today when the new court term begins. And to say it plainly: I’m ecstatic about it.