Capitol under siege by Trump rioters on January 6

A mob of angry Trump supporters stormed the U.S. Capitol on Wednesday, seeking to stop the counting of the Electoral College votes for President-elect Joe Biden's November victory over President Donald Trump.

A substantial number of right-wing media figures tweeted in support of the insurrectionists, defending their actions and drawing false equivalences.

The riot at the Capitol came after a rally in Freedom Plaza, which was headlined by Trump and other Republican officials who are trying to discredit Biden's victory in the election, and which included a number of provocative statements to the crowd. Rep. Mo Brooks (R-AL)proclaimed to attendees, "Today is the day American patriots start taking down names and kicking ass," and Trump's attorney Rudy Giuliani likened his quest to examine "crooked" voting machines and "fraudulent" ballots to a "trial by combat."

Trump himself told his supporters: "You'll never take back our country with weakness. You have to show strength, and you have to be strong. We have come to demand that Congress do the right thing and only count the electors who have been lawfully slated."

As the rally concluded, attendees charged toward the Capitol steps, fighting with Capitol Police and breaching security barriers to go inside the building, causing Congress to halt its proceedings.

The Gateway Pundit site ran a headline describing the mob as "patriots." 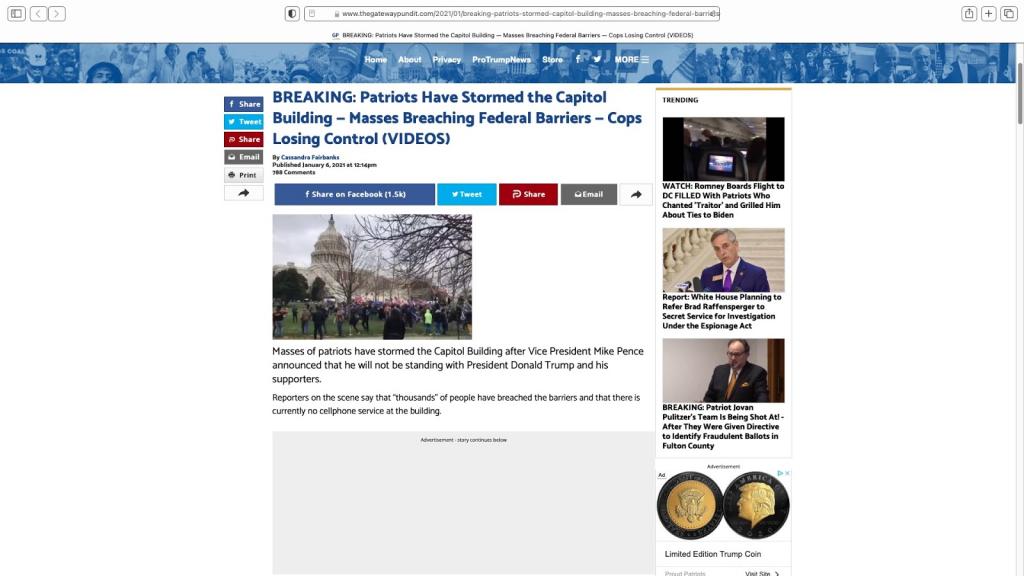 Sebastian Gorka, the former Trump White House deputy assistant who praised the supposed "patriots" on his radio show, also cheered on the event using his Twitter account, declaring that they had "taken Capitol Hill." 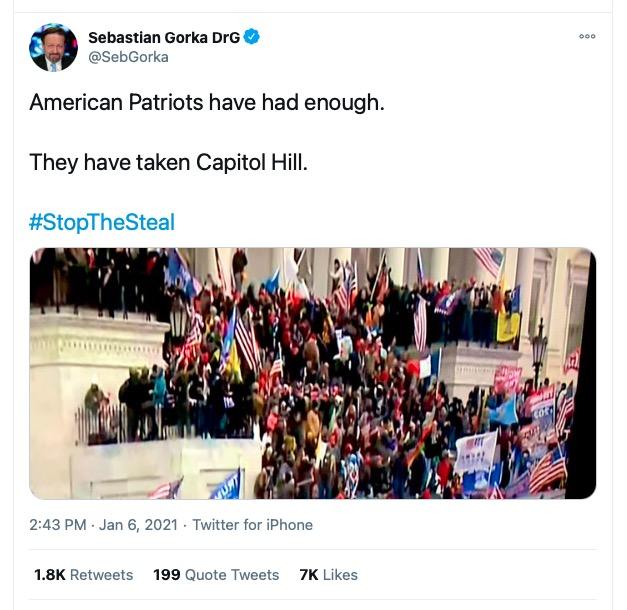 Elijah Schaffer of BlazeTV posted video clips of the ongoing mob conflicts with the police and posted a photo that he said was taken from inside House Speaker Nancy Pelosi's (D-CA) office, claiming that he was there "with the thousands of revolutionaries who have stormed the building" and describing the attack on the Capitol as "the current revolution." 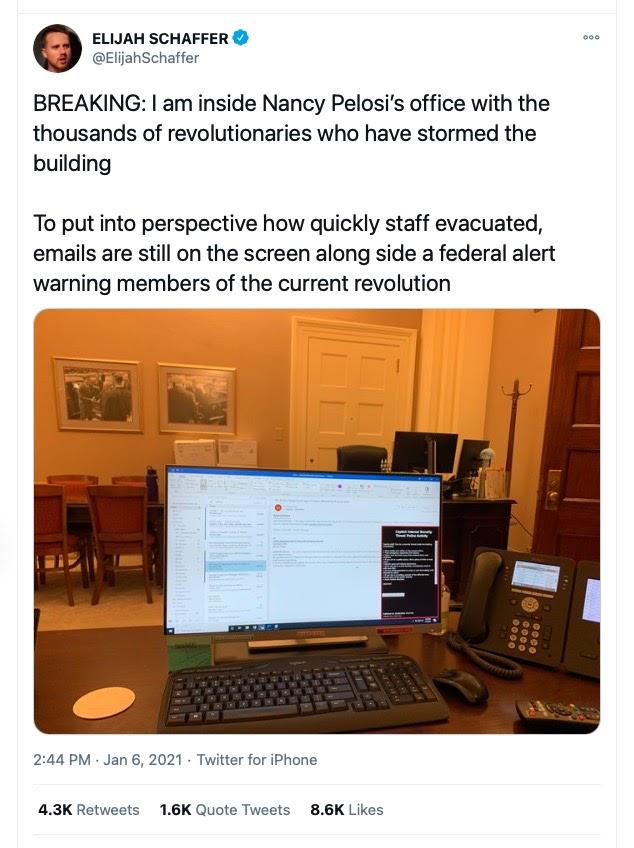 Radio host Rush Limbaugh's producer James Golden, who also goes by the radio name "Bo Snerdley," described the event as a "peaceful protest" and called the election "fraudulent." He also suggested that anti-fascist elements had "infiltrated this" in order to spark violence.

And while claiming to abjure violence, Golden seemed to be positioning the actions of the mob alongside other alleged offenses such as "stolen elections" and "horrid journalism." 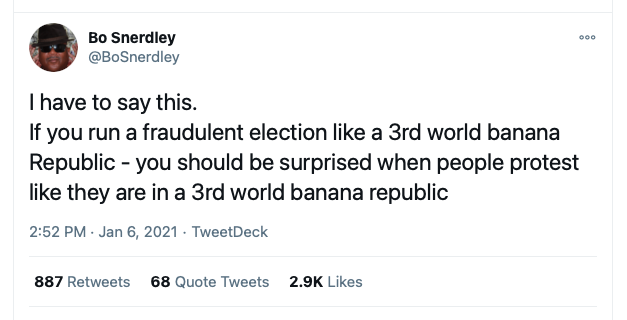 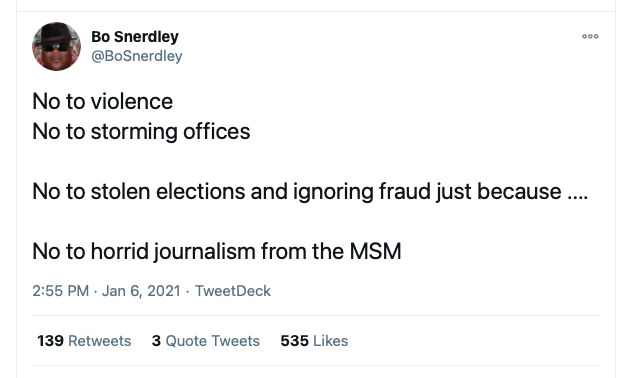 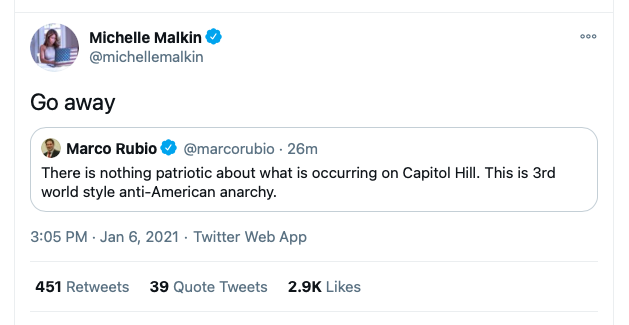 Fox Business host Charles Payne retweeted a message asking: "How long do you expect people to be SILENT?" 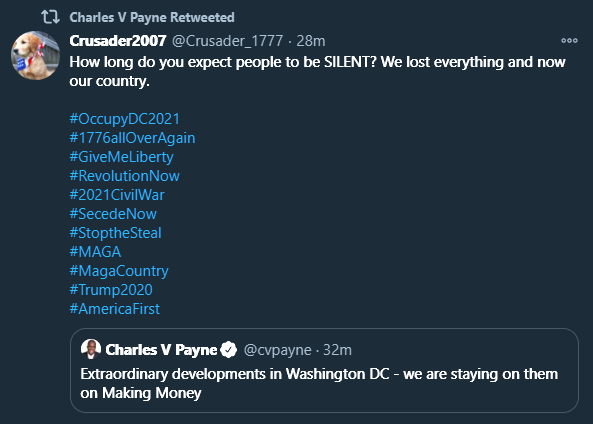 Patrick Howley, who runs the right-wing site National File, openly called for the overthrow of the civil government and claimed if the "Patriots seize the control of Congress, … they have the right to assemble their own Congress": 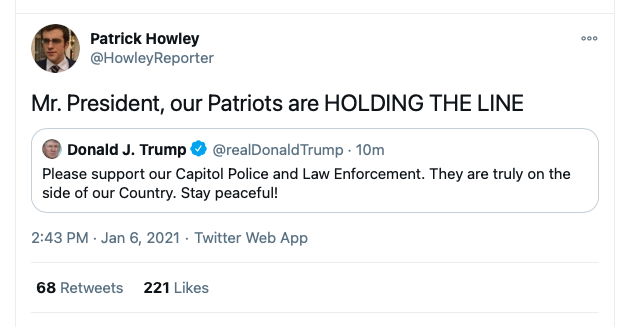 Right-wing provocateur Dinesh D'Souza, who has received a presidential pardon from Trump on his conviction for violating campaign finance laws, argued: "I don't approve of storming the Capitol but isn't it a fact that if Antifa and BLM did it, the media would be in raptures about the passionate demonstration of commitment to racial justice?"

D'Souza, who has also pushed misinformation about the election and previously declaredthat "we are not uniting with thieves and tyrants" — meaning a Biden administration — also argued on Wednesday that "the Trumpsters are taking a page from the Democrats. … The Left tried to win by forced occupation what it could not win through the political process. So ditto now from the other side."

He then added with a quote from military history, likening the post-election events to a war. 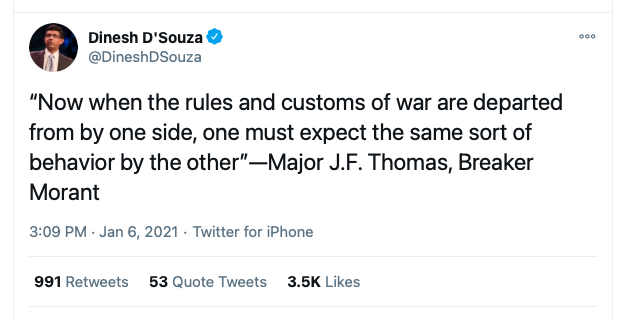 Right-wing Twitter personality John Cardillo declared, "DC is seeing what happens when you ignore the Constitution and the will of the people for decade upon decade." He further added: "They make a mockery of American and Americans, and now act like victims when people have hit their boiling point."

Nothing is more predictable than Republicans complaining about budget deficits and federal spending — as soon as a Democrat enters the White House.

Wasteful fiscal decisions, especially cutting taxes for their wealthiest donors, never trouble these self-proclaimed "conservatives" in the slightest. But let a liberal spend a few dollars on a hungry child's breakfast or a teacher's salary and suddenly their hair catches fire.