"If you feel a symptom, then you have to hit it extra hard. … Double up. Triple up."

"This is the kind of best defense that we've got against corona."

"You can fight this from within. That's the only way."

Conservative talk radio listeners are hearing marketing for a supplement that can supposedly defend against the coronavirus and even extinguish its symptoms. The promotions are for Balance of Nature, a company with a history of deceptive marketing that's heavily advertising in markets including New York City through radio partnerships.

The Centers for Disease Control states that "there is currently no vaccine to prevent coronavirus" and "the best way to prevent illness is to avoid being exposed to this virus."

The FDA has issued warning letters to several companies with products "that, without approval or authorization by FDA, claim to mitigate, prevent, treat, diagnose, or cure COVID-19 in people." New York Attorney General Letitia James has also taken action against "individuals and companies selling and marketing certain products as treatments or cures for the coronavirus," including hosts Alex Jones and Wayne Allyn Root.

Balance of Nature produces a "natural whole-food produce supplement" which it claims "makes it easier to get the recommended daily servings of fruits and veggies." It is led by Douglas Howard, who, according to the company, received his doctor of chiropractic degree at Cleveland Chiropractic College and "has not practiced and is not currently practicing as a medical doctor."

Numerous radio hosts have done marketing such as commercials, endorsements, and interview segments for Balance of Nature. The promoters include Salem Radio Network hosts Larry Elder, Mike Gallagher, and Sebastian Gorka; and Joe Piscopo and Kevin McCullough. Balance of Nature also produces a radio infomercial which airs around the country, including in Chicago, New York City, and San Diego.

Balance of Nature has a history of engaging in problematic marketing, as the nonprofit Truth in Advertising has documented. In August 2019, the Food and Drug Administration sent a warning letter to the Utah-based company after an inspection and review of its operations "revealed serious violations of the Federal Food, Drug, and Cosmetic Act (the Act) and applicable regulations." The infractions include product labeling which "establish that these products are drugs … because they are intended for use in the cure, mitigation, treatment, or prevention of disease." The FDA wrote that the company made treatment claims regarding ailments such as cancer, diabetes, arthritis, cholesterol, and multiple sclerosis.

The company is now trying to capitalize on the coronavirus pandemic with similar prevention and treatment rhetoric on radio. The supplement has been pitched to listeners as the "only" and "best" defense against the virus, and also as a treatment against it when the first signs of symptoms occur.

During a March 2 appearance on WNYM's The Joe Piscopo Show, which was first noted by Truth in Advertising, Howard portrayed his product as "the only way" to fight the coronavirus, stating: "Balance of Nature has that chemistry to build the immune system, awaken it, and make it be there. You can fight this from within. That's the only way." He also said that when you feel "a little tickle in your throat" or "a little sniffle," you should "double, triple, quadruple" the use of the product. From the appearance:

DOUGLAS HOWARD: Right now in all of this scare that everybody's having, you know, is — the biggest thing is the only defense you have — there is no drug, there is no chemical. The only defense you have is to build your own immune system. And that's what I do. People call me. I get calls, texts, and emails every day, personally, it said, "What are you doing? What are you doing?" I say, "Just exactly what I do every day. I'm building and keeping my immune system safe."

The thing is is you've got to look at it three ways. Number one, you have to, you have to stay active. Move as much as you can. Get outside of stuffy rooms, get fresh air, move around, be social. Get out of any negative — get out of negative fights and social activities you have.

And then you've got to give it the right chemistry. Give it the chemistry. And Balance of Nature has that chemistry to build the immune system, awaken it, and make it be there. You can fight this from within. That's the only way. One other thing, and I want to tell you this, too. Anybody. Joe, if you start to get a little tickle in your throat, you start to get a little sniffle. At the first sign of it, double, triple, quadruple — I'm dead serious. It's easier to put a spark out than it is to put out a fire. And this thing becomes a raging forest fire.

Later during the program, Howard said that any future immunization to the coronavirus will be too late for people and "your body will build its own immunity to it. … I take Balance of Nature."

HOWARD: Build your immune system. That's all you can do. There's not a drug, there's not a — there's nothing out there. By the time they come up with an immunization, if they can, or could, then it's already going to have happened. And your body will build its own immunity to it. That's what our body does — it's amazing, it's awesome. And it's the, it is the immunosuppressed and the people who already have severe illnesses, and the elderly, are the most at-risk. And they have to be ultra careful, I will agree. And everybody else, all of us, we need to be vigilant on our own immune system. I take Balance of Nature, I keep active, and I try to stay out of any difficulties in relationships.

Radio host and Balance of Nature pitchman Kevin McCullough has sold the supplement as a solution to the coronavirus, flu, bronchitis, and cancer. 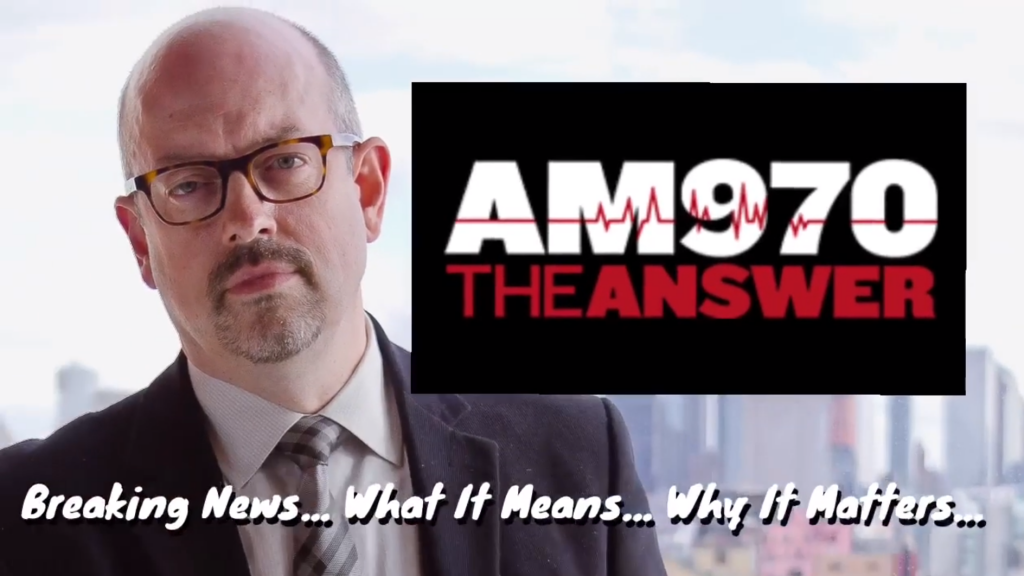 Balance of Nature is a major advertiser on Kevin McCullough Radio, where Howard has a weekly segment. McCullough is a conservative commentator who frequently appears on Fox News. Kevin McCullough Radio airs on WMCA (AM 570) and WNYM (AM 970) in New York City (he also hosts a video version of his show called Radio Night Live).

McCullough has previously promoted Balance of Nature as a potential treatment for cancer and other medical problems. He stated in June 2017: "If you're struggling with some health areas, and Dr. Howard, I don't think there's any limit on what these things can really help, at least not in the overwhelming amount of response that you've had. I mean, if you've got — if you're struggling with cancer, if you've got hep-C, if you've got other types of deficiencies, get this stuff going. What can it hurt if it gives you that relief or begins to help you in that way that is really powerful?"

In May 2017, he promoted a segment with Howard and wrote: "Literally did more to cure my flu this year than any anti-viral or antibiotic Ive ever used." In September 2017, McCullough wrote: "Whether you struggle with skin irritations, diabetes, Hep C, cancers, lower abdominal, prostate issues, low energy, and literally tons of other areas, the power of whole fruit and vegetables and their tens of thousands phytonutrients to improve every cell in your body has been peer-reviewed, and medically observed. … They radically changed my life. I used to get sick every time the weather changed, but now taking fruits and veggies I haven't had even one bronchial, asthmatic, allergy, cold or flu."

McCullough and Howard are now turning their sights to the coronavirus and pitching Balance of Nature as a solution.

During McCullough's February 27 show, he and Howard discussed ways to protect against the coronavirus. After talking about aspects related to health, Howard concluded by telling listeners that "the key is, is, for example, I do take Balance of Nature. That's what I take." McCullough then went for the sale, stating: "To reiterate, and I want to be very clear, doc's not saying fruits and veggies will cure anything. He's not saying that it'll cure you from anything. What he's saying is it will help your immune system be the fighters that your body needs when it is attacked and this is the kind of best defense that we've got against corona and those other, even the flu, and other things right now." McCullough added that people should "order more than just the basic dosage so that you can boost that immune system and be ready in the event that you come into contact with something that you shouldn't be."

On March 5, Howard dismissed the hypothetical coronavirus vaccine, stating: "I'll be honest, I'm not going to run out and do this vaccination anyways because I've been working on this for weeks and months and years of my own immune system and it's not too late for everybody to start, and we briefed on this last time a little bit, but I'd like to hit a little bit more on what can you do to take away some of this hysteria."

Later while discussing ways to fight the coronavirus, Howard said: "If you feel a symptom, then you have to hit it extra hard. And so I'm talking to all of our, all of our — the people who have listened to me in the past that are taking Balance of Nature, for example, and living by this health triad, which is what I call this. If you're living by the health triad and you start to feel a symptom, then you hit it back hard. Double up. Triple up. There's nothing, you know, with Balance of Nature — there's no toxicity." McCullough followed up by asking, "You can't overdose on it, is what he's saying?" to which Howard replied: "No."

During a March 19 segment about the coronavirus featuring Balance of Nature, McCullough concluded by stating that he's "upped my dosage the last couple of weeks because I am the one person in the house that's been going out and having contact with the public, even at the grocery stores and stuff. So, I've got to tell you, it's working for me. I think it will work for you."

From Your Site Articles
balance of nature

Where ultra-wealthy TV quack doctor Mehmet Oz actually lives is a mystery. He doesn't seem to reside in Pennsylvania, where he is currently the Republican U.S. Senate candidate. He owns a mansion in New Jersey -- and what he calls "properties" in at least nine other places, although he claims to only "legitimately" two homes (whatever that means).

Not surprisingly, Lt. Gov. John Fetterman, his Democratic opponent and a trolling master, has taken acerbic note of this curious situation in a certain television host's style -- and then dropped an amusing video via Twitter.

(Reuters) -Walmart Inc, the largest private employer in the United States, is expanding abortion and travel coverage for employees, about two months after the Supreme Court overturned the landmark Roe v. Wade decision that legalized the procedure nationwide.

In a Friday memo to its 1.6 million U.S. employees that was seen by Reuters, the retailer said its self-insured healthcare plans will now cover abortion "when there is a health risk to the mother, rape or incest, ectopic pregnancy, miscarriage or lack of fetal viability."

GOP House Candidate: Garland Should Be 'Executed' For Trump Search