No, thanks
Tag: big bank overdrafts

Last year was a difficult one for millions of people in the United States.

It was not so difficult for big banks, and one of the ways the banks raked in revenue was by hitting struggling people with overdraft fees.

During the final quarter of 2020, when the coronavirus pandemic was battering the country, JPMorganChase, Bank of America, and Wells Fargo each took in more than $300 million in overdraft fees alone. Those fees are slapped on people who are by definition struggling, and banks often use strategies to maximize the number of fees people pay, like ordering transactions so that the biggest amounts go through first, which lets them charge fees on more, smaller transactions. And it's no thanks to the banks that it wasn't much, much worse—COVID-19 relief from the government protected many people from the worst.

This is an ongoing story—bank overdraft fee policies have been terrible for years. But it took on new dimensions during the pandemic, with sky-high unemployment creating a financial emergency for so many people.

"Banks could've capped overdraft fees for a certain number of months, or had no fees during the pandemic, but they didn't want to give up a dollar of overdraft revenue in any formal way," Rebecca Borné, senior policy counsel at the Center for Responsible Lending, told The American Prospect's Alexander Sammon. "So what we see now is a return to business as usual, where our largest banks each took over a billion dollars out of the checking accounts of people during one of the worst years in our history. It's a gobsmacking amount of money."

It would have been much worse without COVID-19 relief bills, from the CARES Act to the American Rescue Plan. Check out how Google trend data on searches for "overdraft" tracked the passage of those laws: 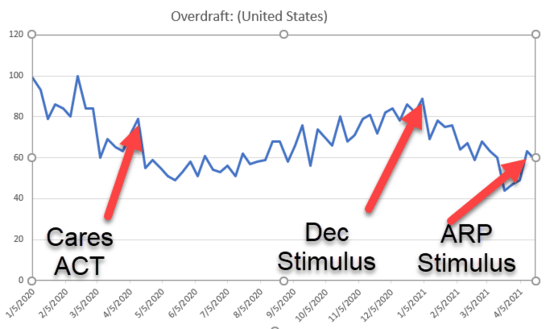 After each round of relief payments, you see searches for "overdraft" drop. Because the banks weren't interested in going easy on people being hammered by a once-in-a-century pandemic and the accompanying economic devastation.

Consider it one more reminder that what we need are regulations and laws to protect consumers. There are two prime ways that could happen on this issue. Early in the pandemic, Sens. Cory Booker (D-NJ) and Sherrod Brown (D-OH) proposed legislation to crack down on overdraft fees during the COVID-19 emergency, banning them altogether for the duration of the emergency and preventing banks from reporting overdrafts to credit reporting agencies—but that didn't get passed. Booker and Rep. Carolyn Maloney (D-NY) have other legislation on overdraft abuses more generally, but as always, there's that Senate filibuster problem blocking progress.

Under President Biden, though, the Consumer Financial Protection Bureau (CFPB) could do a lot more protecting consumers than the agency did under Donald Trump. Biden's nominee to head the CFPB, Rohit Chopra, hasn't yet been confirmed, but he's known as a strong consumer advocate. He could regulate the practice, which is extraordinarily abusive even in non-pandemic times.