No, thanks
Tag: ian prior

Fox News has avidly promoted former Trump administration officials as seemingly being just concerned local parents in the network's coverage of the upcoming Virginia gubernatorial election. And in the case of one guest who has frequently appeared or been cited by the network's hosts, his political connections go far and wide through both political campaigns and even Fox News itself.

Ian Prior is one of many Republican activists, political staffers, and Trump administration alumni who have appeared on Fox News as part of its campaign against "critical race theory." The network has used the term as a "catch-all" phrase for any right-wing culture war grievances, especially over racial diversity and civil rights, in an effort to mobilize Republican voters for this year's Virginia elections and the midterms next year.

Prior now leads Fight for Schools, a political action committee launched this year to support "common sense candidates" who oppose "critical race theory." In addition to his many years in communications for Republican campaigns, he has his own political communications consulting firm and political newsletter. He also worked in the Trump administration from 2017 to 2018, as deputy director of public affairs at the Justice Department under then-Attorney General Jeff Sessions.

And the world of both conservative media and Republican political operatives is a small one indeed. During Prior's time as deputy director of the DOJ's Office of Public Affairs under Sessions, his coworkers in public affairs included media affairs coordinator Devin O'Malley — who is now the campaign spokesman for Republican gubernatorial nominee Glenn Youngkin. In addition, two other colleagues were media affairs specialist Kerri Kupec, who this year became Fox News' Washington, D.C., editor after serving the rest of former President Donald Trump's term at DOJ under both Sessions and his successor, Bill Barr; and press assistant Kelly Laco, who is now a news and politics editor for Fox News digital content — and who has quoted Prior in at least one article. (The article noted Prior's DOJ experience, but not the fact that he and Laco were former colleagues.) 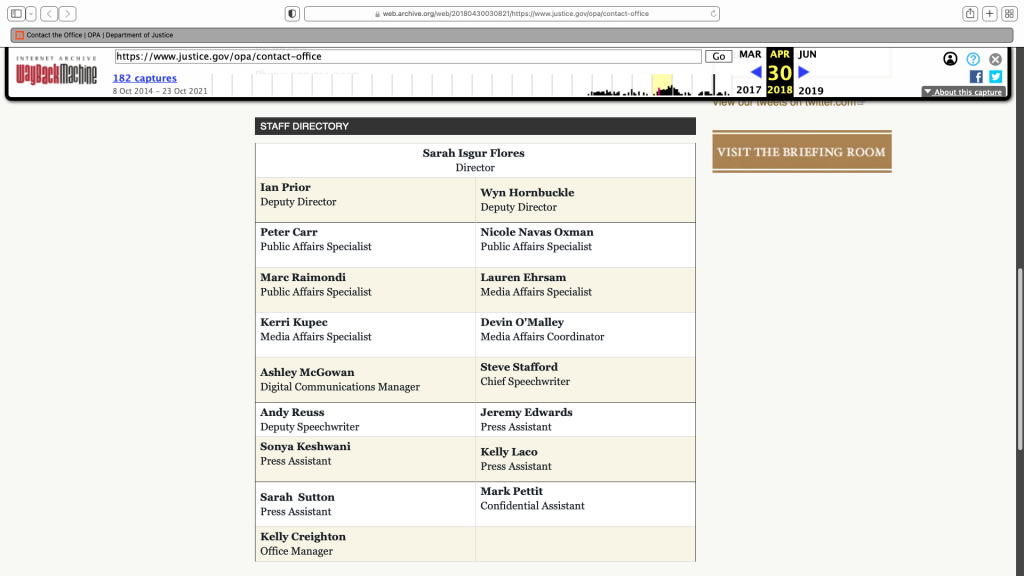 On Wednesday's edition of Fox & Friends, co-host Steve Doocy read a statement from Prior, responding to former President Barack Obama's recent campaign rally for former Virginia governor and current Democratic nominee Terry McAullife — while presenting Prior as simply a concerned local parent who has come to prominence recently.

"Ian Prior, who's been on this program, he's one of the parents who's very concerned about what's going on out in Loudoun County," Doocy said, before reading a statement that concluded with the accusation: "It is clear that all the star power coming in for Terry McAuliffe is reading off the same deceptive page of sheet music with talking points designed to deceive people as to what's really happening in Virginia public schools."

Co-host Brian Kilmeade then added: "This is real, this is organic, this is not scripted. These are people standing up, Democrats and Republicans standing up for what's happening in their schools."

Prior also appeared last Thursday with Fox News host Sean Hannity, during which his background as a Trump administration staffer was also not disclosed. By contrast, Prior had also appeared twice this month on The Story with Martha MacCallum, during which both MacCallum and guest anchor Trace Gallagher cited his experience in the Trump administration. (Though earlier this year, MacCallum had also failed to disclose Prior's background.)

So it appears that as the Virginia election gets closer, Prior has become less and less of a former Trump DOJ official and more of being just a concerned local parent whose attacks on Democrats are "organic" and "not scripted."