A United Nations scientific panel released a major new climate change report on the night of October 7, warning of dire consequences if world governments don’t take unprecedented and dramatic steps in the next decade to rein in greenhouse gas emissions. The next morning, the majority of top U.S. newspapers failed to mention the report on their homepages.

At 9 p.m. EDT on October 7, the U.N. Intergovernmental Panel on Climate Change (IPCC) released its long-awaited special report about what will happen if the average global temperature rises more than 1.5 degrees Celsius above pre-industrial levels, and what would be required to prevent such a rise. The average temperature has already risen 1 degree C worldwide, and we will see dramatic and deadly impacts if it rises 2 degrees or more, which is now considered extremely likely. The IPCC report was requested by world leaders as part of the 2015 Paris climate agreement. The report emphasizes the need for unprecedented action in the coming years to prevent the worst effects of climate change, and warns of the dire impacts if humanity fails to take that action.

The majority of top U.S. newspapers neglected to cover the IPCC report on their homepages

Between 9 a.m. and noon EDT on October 8, Media Matters analyzed the homepages of the top 50 U.S. newspapers as ranked by average Sunday circulation. Twenty-eight of the papers did not mention the report on their homepages at all:

Of the above newspapers, 10 serve cities that are listed among the “25 U.S. Cities Most Affected by Climate Change“ in a 2015 weather.com report: Baltimore, Buffalo, Columbus, Denver, Louisville, Newark, Philadelphia, Pittsburgh, Portland, and St. Paul.

Other major newspapers in cities heavily affected by climate change also failed to highlight the IPCC report. The Las Vegas Review-Journal, the largest newspaper in Nevada, did not note the report on its homepage. Las Vegas is ranked third in the weather.com list. The Miami Herald also did not mention the IPCC report on its homepage, though it did link to an article about how the risk of sea-level rise threatens real estate prices. Miami will be particularly affected by sea-level rise; a study published last year in the journal Nature concluded that rising seas as a result of climate change could cause more than 2.5 million Miami residents to flee the city.

Only 22 of the top 50 U.S. newspapers mentioned the IPCC report on their homepages

These are the papers that linked from their homepages to articles about the IPCC report:

A few of the newspapers featured the IPCC report prominently on their homepages, including The New York Times, The Washington Post, the Los Angeles Times, and the Minneapolis Star Tribune, but most of homepage mentions of the report were just headlines. Here’s how the Star Tribune featured the report: 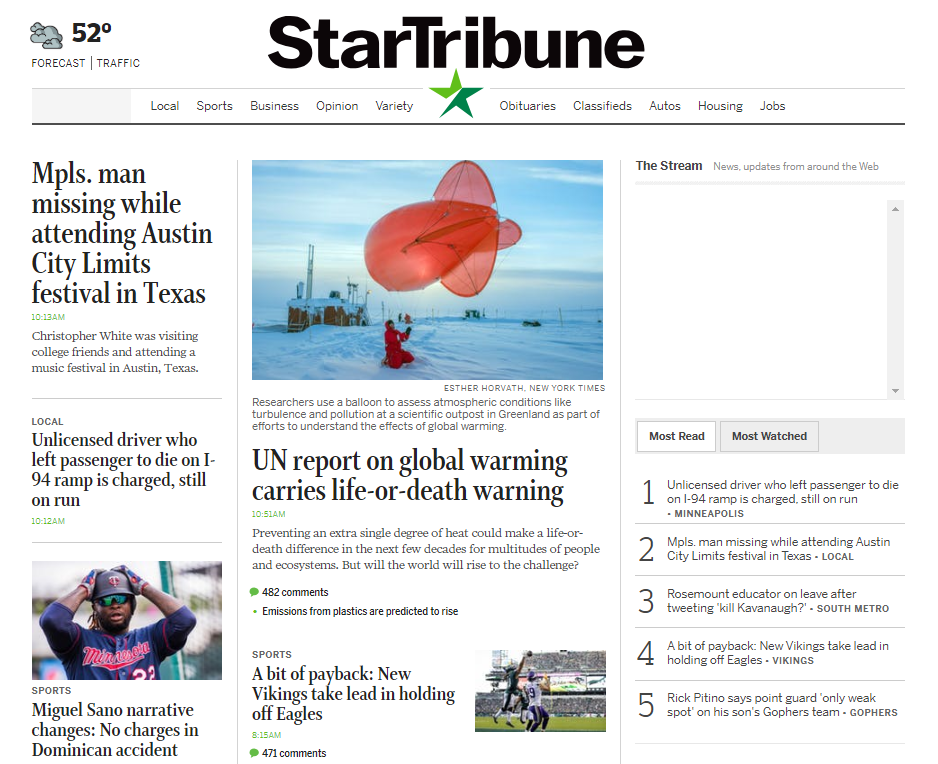 Methodology: Media Matters searched for the terms “climate change,” “global warming,” “IPCC,” “report,” and “scientist” on the homepages of the top 50 highest-circulation U.S. newspapers between 9 a.m. and 12 p.m. EST on October 8. The list of newspapers was taken from the recent Pew Research Center report State of the News Media.