The reviews from Michigan are in and they are not looking good for Donald Trump. Not only have the last several polls of the state shown Joe Biden ahead by double digits, but one of those polls captured data showing that Trump likely has no one but himself to blame for surrendering the state.

The New York Times/Siena poll released last week put Biden up by 11 points in the Great Lakes State, but it also tested the question in a half dozen battleground states, revealing that Michigan voters were far more likely than voters from other states to believe Trump had treated the state unfairly during the coronavirus response.

Just look at this graph—one of those things is not like the other. 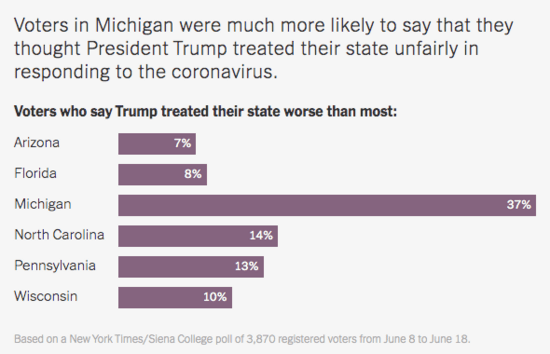 While fully 37 percent of Michigan voters said Trump had treated their state worse than most in the pandemic response, the second highest response reflecting that belief came from North Carolina at 14 percent. Every other battleground state falls below that and a couple—Arizona and Florida—didn't even break double digits on that question.

It's little wonder then that Trump's highest disapproval rating among the battleground states came from Michigan voters at 59 percent. Apparently, people don't like it when the president of the United States plays games with people's lives in the middle of a global pandemic. Go figure.

Trump has made unforced error after unforced error in the state, perhaps most prominently picking a high-profile fight with the state's governor, Gretchen Whitmer, as she tried to secure life-saving supplies for the state with the help of the federal government. He also insulted every female member of the state's executive leadership team along with the very popular Rep. John Dingell, who recently passed away, and his wife, who now represents the state.

Trump's last trip Michigan in May was a disaster as he declared one of Ford's premier sports cars too pricey and praised the "bloodlines" of Henry Ford, a well-known anti-Semite.

An in-state pollster also recently captured data showing that Trump's approvals dipped following his violent clearing of peaceful protesters in front of the White House to make way for his Bible photo op. Trump lost ground to Biden in the same set of polls after the photo op debacle.

Barring a miraculous turnaround, Michigan is most likely out of reach for Trump at this point. And he has no one to blame but himself.