Fox host Tucker Carlson is returning to his show tonight, after an attempted cooling-off period for defending white supremacy and downplaying white nationalist violence in the wake of the El Paso, TX, mass shooting, but he’ll be returning to one of the lowest number of paid advertisers since Tucker Carlson Tonight debuted.

Since December 2018, Carlson has lost over 70 paid advertisers. Over the past 11 days, at least five advertisers — HelloFresh, Nestle, SteinMart, Calm and SoFi — have removed their ads from Tucker Carlson’s show, and many more have quietly distanced themselves. One major Fox News advertiser, Long John Silver’s, was so frustrated that it removed its ads from the network entirely.

“Fox News sent Tucker Carlson on vacation in hopes of stemming the tide of advertiser losses,” tweeted Angelo Carusone, president of Media Matters for America. “Instead, advertisers have only increased the drop rate in order to get off the show (and some off Fox News entirely) before Tucker is [scheduled] to return.”

Through the cooling-off period, Fox has been trying to show advertisers that it’s safe to come back. But Fox’s programming, even in Carlson’s absence, has further exposed that the bigotry is not limited to Carlson — it’s networkwide.

Carlson has seen his nightly paid ad load plummet from a high of 36 paid ads each night in October 2018 to averaging 15 per episode in August 2019.

“Network figures going on sudden vacations” is a commonly employed tactic by Fox used to distract the public, mitigate public outrage, and prevent advertisers from fleeing. With this “vacation,” Fox News is hoping everyone, especially advertisers, forgets what happened. Fox’s PR team then works overtime trying to spin the media narrative, claiming that everything is fine and that pressure campaigns don’t work. Despite those efforts, many observers quickly noticed the negative changes to Carlson’s ad breaks — including losing an entire break, leaving the show with only four — and observed that the network is heavily relying on in-house promos and PSAs, as it has done when other hosts have facedsimilar mass exoduses. 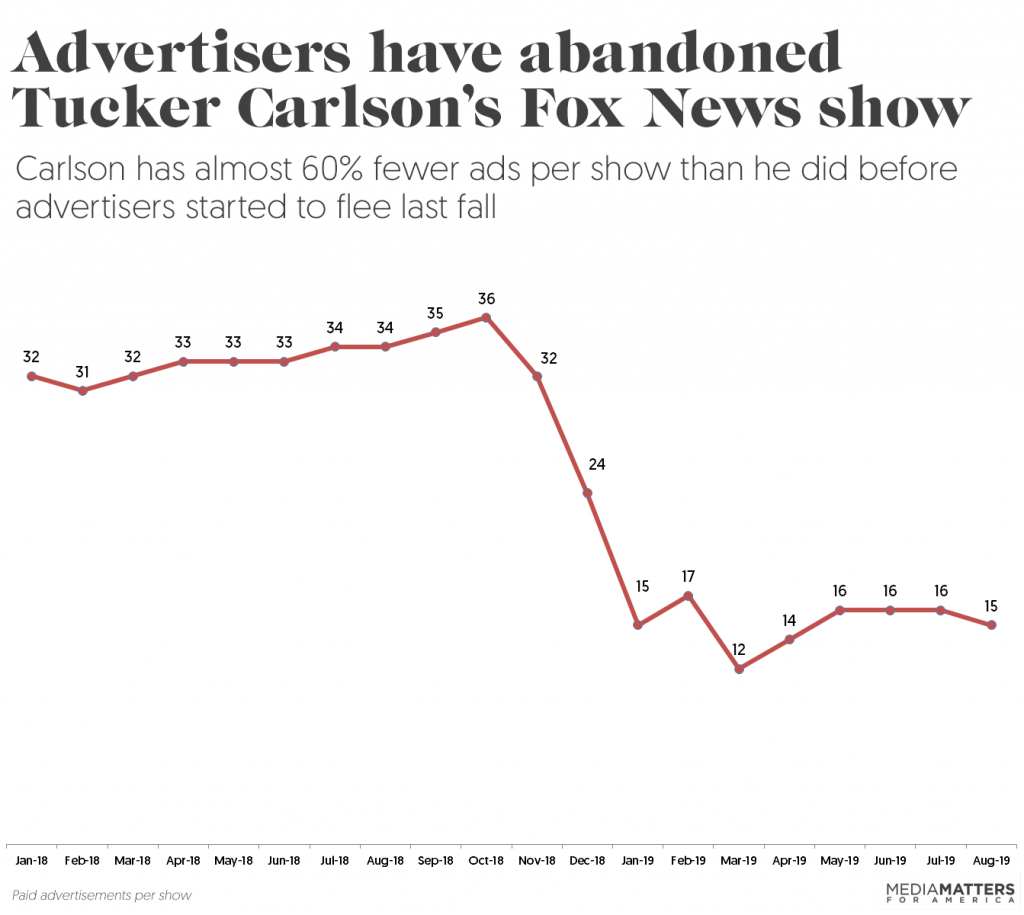 To understand why the vacation tactic doesn’t work, it’s important to remember how we got here.

On December 13, 2018, Carlson opened his show with a racist and xenophobic monologue in which he said immigrants make America “poorer and dirtier and more divided.”

Immediately following that segment was an ad for Pacific Life. When reached for comment, the insurance giant quickly denounced Carlson’s comments and said it wouldn’t be advertising on his show anymore. Instead of apologizing or clarifying, Carlson doubled down.

On January 2, Carlson kicked off the new year with a misogynistic rant attacking career-oriented women, claiming that when women make more money than men, that leads to “more drug and alcohol abuse [and] higher incarceration rates.”

These two controversies sent shockwaves through his ad breaks. Companies soon realized the risks associated with advertising on his show, fearing their brand would be the next one juxtaposed with an offensive viral moment. It became a race not to be last.

This news spurred another wave of advertiser drops, with most of Carlson’s remaining blue-chip sponsors — including Outback, Capital One, and AstraZeneca — finally separating themselves from his show. By this point, Carlson’s ad breaks had already shrunk and the network became reliant on in-house promos to fill time.

Things went from bad to worse in early August, when a white supremacist fueled by xenophobic and racist rhetoric — similar to views Carlson espouses on his show — opened fire at an El Paso Walmart and specifically targeted Latinx people, killing 22 and wounding 24 more. Just two days after the horrific attack, Carlson claimed white supremacy is “actually not a real problem in America” and that calling it a serious issue is “a hoax” and “conspiracy theory used to divide the country.”

In 2018, Long John Silver ran ads on Fox almost every day; they advertised heavily for the first portion of 2019. In April declined to renew contract and to avoid Fox News going forward. Today they confirmed to me

Six advertisers left while Carlson was off the air. And as he returns, one thing can be certain: Nothing about his show will change. The pattern of behavior is clear and well-documented. Advertisers are already well aware of his behavior. He won’t return as a reformed man who has changed his ways. He’ll still be the incendiary opinion host white nationalists cherish.

The question for the few remaining advertisers is whether they want their branding on his show.