No, thanks
Madeleine Davison
FollowUnfollowFollowing

Over the last year, conservatives spun “critical race theory” (CRT) into a key phrase in the national cultural and political landscape, marking a new battle in the unceasingculturewars. Right-wing media and hundreds of right-wing Facebook groups helped, using empty but dangerous and often racist rhetoric to depict CRT as a threat and energize the Republican base.

Critical race theory is a decades-old academic framework, typically taught in graduate-level courses, that explores how racism is structurally embedded in U.S. institutions. However, conservatives have co-opted the phrase to bash any discussion of systemic racism and racial justice efforts. In particular, right-wing activists have attacked curricula in K-12 classes, where critical race theory is not generally taught. Anti-CRT advocates instead push for children to be miseducated by a whitewashed version of history that ignores systemic racism and the culturally diverse history of the country, including contributions of Black people and other people of color. The push against CRT has also converged with anti-LGBTQ movements, with many of the same tactics used to attack LGBTQ inclusion and specifically target trans individuals.

Right-wing media’s manufactured hysteria about CRT has helped spawn bans on books and on teaching certain concepts in many states and school districts, undermining educational standards for American students. As of December, 29 states have introduced bills or taken other steps to limit how public school teachers can discuss racism and sexism in the classroom, and 13 states have enacted such restrictions. This strategy is part of a long history of white backlash against racial justice movements in which right-wing media have gleefully led the way. Right-wing attacks on public education also dovetail with a larger conservative push to privatize K-12 schooling.

Republicans’ electoral strategy around CRT dates back to at least the 2012 election, when conservative media figure Andrew Breitbart tried to accuse then-President Barack Obama of embracing “anti-white” views by linking him with prominent critical race theory scholars. A decade later, GOP candidates in state and local elections in 2021 (sometimes successfully) embraced anti-CRT rhetoric to sow panic among their voter base and gain support for their campaigns. Hysteria over CRT has also triggered discord in school board meetings across the country, inspiring dozens of recall efforts and spurring anti-CRT figures to run for school board seats. In some cases, right-wing activists and parents have harassed and sent death threats to school board members and administrators, driving some to resign. Meanwhile, Fox News has already framed CRT as a “new hot-button issue” going into the 2022 midterm elections.

A feedback loop of astroturfing campaigns, cozy relationships between conservative activists and right-wing media, and online disinformation has spread lies that undermine public education and obscure the truth about structural racism in America.

Here are some examples by the numbers:

Here's How Fox News Turned CRT into a Boogeyman

Multiple right-wing media figures, outlets, and social media users falsely claimed that a viral video showing a man in Afghanistan suspended from a helicopter was an execution by the Taliban. Other footage of the flight showed the man alive and well, and reportedly he was attempting to fix a flag.

This narrative is just one example of multiplefalsehoods spread by conservatives to attack President Joe Biden following his decision to withdraw U.S. military forces from Afghanistan.

As Media Matters previously wrote, Fox News host Sean Hannity aired the footage on the August 31 edition of Fox News' Hannity, falsely claiming it showed the Taliban dangling a hanged man from a Black Hawk helicopter in Afghanistan. But Hannity's claim had been debunked before his show aired.

Conservative media personalities and politicians — including Sen. Ted Cruz (R-TX) and Rep. Jason Smith (R-MO) — also repeated the false claim on Twitter, using it to criticize the Biden administration's decision to remove U.S. troops from Afghanistan. Cruz later deleted his tweet, writing that the information in it "may be inaccurate." 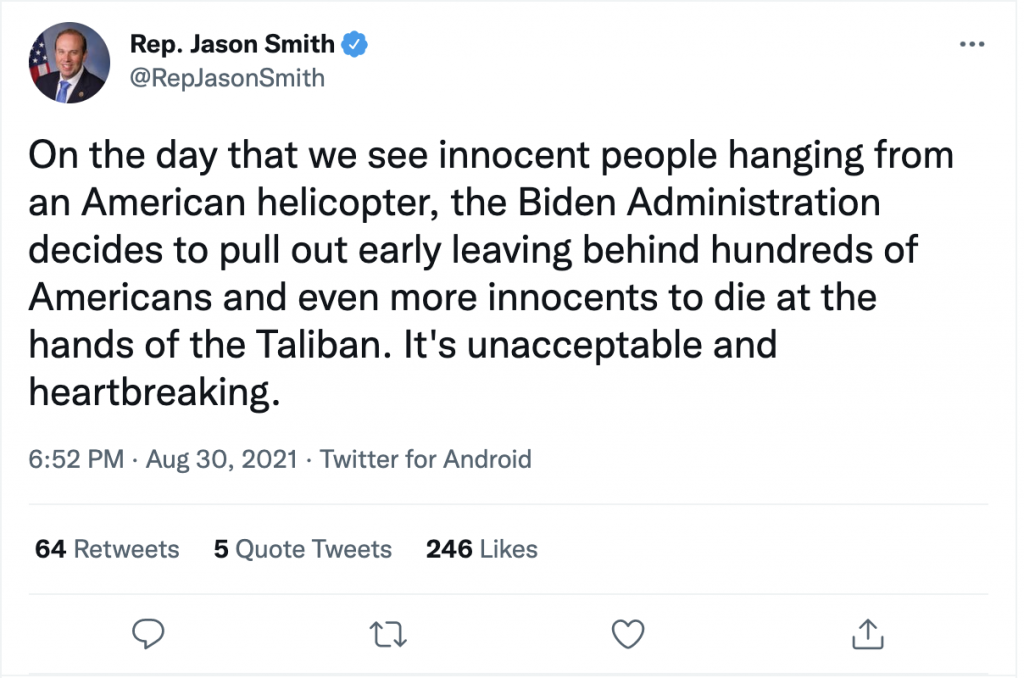 A Fox anchor along with multiple contributors and guests have also engaged with the false claim, as have other right-wing cable channels like One America News Network and Newsmax, other media organizations and users on fringe social media platforms.

Other right-wing outlets and social media