Which Part Of US Is Leading On Vaccination? It's Puerto Rico

When news out of Puerto Rico catches the attention of the rest of the United States, too often that news is bad. Whether it's hurricane damage, a struggling power grid, or a health care system swamped with debt, Puerto Rico seems like … exactly what you would get it you took a small island state and used it to test everyone's latest pet economic theory,

then walked away from the resulting disaster without bothering to chip in even a fraction of what it would take to repair the damage while holding that state to rules no one else has to follow.

That's not this story—this story is good news, news about Puerto Rico leading the nation and providing a lesson all the states that do get representation in Congress should learn. Because, as NPR reported, Puerto Rico is outpacing the nation when it comes to vaccination.

The highest rate of COVID-19 vaccination in the U.S. is not in a liberal-leaning Northeastern or West Coast state. It's in Puerto Rico, where more than 73 percent of the total population is fully vaccinated. The U.S. national average is just over 57 percent.

If those numbers seem low, that's because these are full population, fully vaccinated numbers—the kind of numbers that really measure how well an area is protected against community spread. Those numbers help to explain why if Puerto Rico was listed with the other states, it would be No. 1 not just in vaccination, but it when it comes to the number of cases per population. It's doing better than Vermont. Better than Hawaii. And it's still running the lowest rates of cases right now—just 20 cases per 100,000 people over the last week.

How did they do it? Exactly the same way that the rest of the nation should be doing it.

What Puerto Rico put in place wasn't rocket science. It was just … science.

The U.S. territory responded with some of the strictest pandemic measures in the country, including nonessential-business closures, stay-at-home orders and mask mandates.

At the outset of the pandemic, Puerto Rico knew it was in trouble. Cases there began around the same time they did in the Northeast, and with a health care system that is perennially underfunded, a much lower number of ICU beds than most of the United States, and a general shortage of health care workers, all of which would make it easy to overwhelm the system, they knew they were in trouble. So they took fast and serious steps not to test the limits of their hospitals but to simply keep people out of those hospitals to begin with. 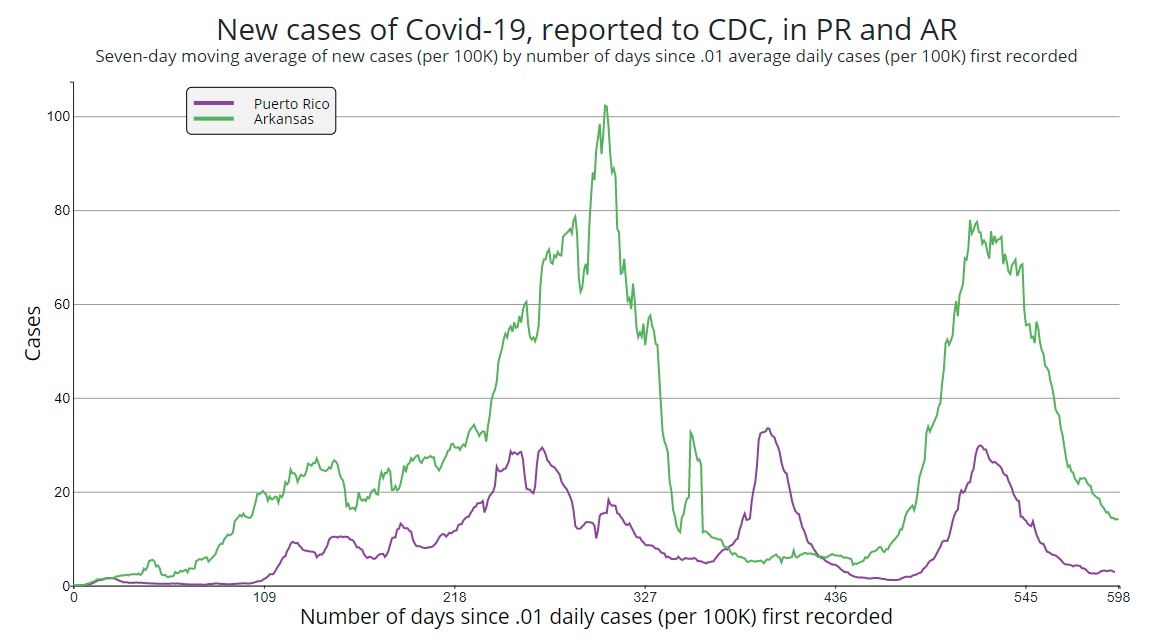 Puerto Rico versus the similarly sized state of Arkansas

Puerto Rico wasn't coronavirus-free. It never had the kind of travel restrictions seen in places like New Zealand, and with a constant influx of travelers from the rest of the U.S., it definitely had its surges. However, none of them were as great as those seen elsewhere in the nation. Though it may come as a surprise to some people, mandates work.

With the number of articles apparently welcoming endemic COVID-19 and the ease with which some officials have adopted the idea that SARS-CoV-2 will be an ongoing fact of life from now on, and despite an economic, medical, and personal toll that's almost guaranteed to be devastating, it's almost surprising to see how much evidence there is that the steps we already understand—social distancing, mask mandates, vaccine mandates, and community outreach—can be fearsomely effective in limiting this disease.

The Centers for Disease Control and Prevention (CDC) clocks the cost of flu in the U.S. at $10.4 billion each year, but that's just the direct cost of hospitalization and treatment. The National Institutes of Health puts the full cost of annual flu at over $110 billion.* For endemic COVID-19, take that number and multiply it by … we don't know. COVID-19 is roughly five times more contagious than flu, at least 10 times more deadly, and many times more likely to generate long-term damage. It's hard to come up with a number for the annual cost of COVID-19 that doesn't exceed the total cost of the whittled-down Build Back Better plan still working its way through Congress—and that bill is supposed to span a decade.

Spending a relatively small amount and undergoing an extended period of inconvenience is a tiny price to pay when considering the potential downside. As New England Complex Systems Institute founder and pandemic expert Yaneer Bar-Yam explains, the cost of continuing to live with COVID-19 could be measured in orphanages. Let's not do that.

Not only do they work, we've known that almost since the beginning of the outbreak. A study in Health Affairs from June 2020 showed that mask mandates had already reduced the number of COVID-19 cases by 200,000. A metanalysis in the Journal of the American Medical Association made it clear that mandates, not voluntary masking, are required to make a significant impact on community spread. Another study in the peer-reviewed site PLOS One estimated that states that dropped their mandates in June 2021 were responsible for an additional 12,000 cases a day compared to what would have happened had mandates remained in place.

During past national crises, persons in the US have willingly united and endured temporary sacrifices for the common good. Recovery of the nation from the COVID-19 pandemic requires the combined efforts of families, friends, and neighbors working together in unified public health action. When masks are worn and combined with other recommended mitigation measures, they protect not only the wearer but also the greater community.

Despite warnings that mandates were going to cause mass resignations, that hasn't proven to be the case. On Monday morning, it became clear that predicted mass resignations in the New York Police Department in response to a mandate were not going to happen. In fact, across the nation, companies and agencies that have instituted mandates have seen very strong compliance.

Vaccine mandates help generate very high levels of vaccination. And those high levels are necessary to fight against a disease as contagious as the delta variant. When it comes to diseases like the mumps or measles, school requirements have driven the nationwide compliance over 90 percent. Something similar is needed to truly thwart community spread of COVID-19.

As Healthline accurately notes, the biggest reason America's vaccination rate isn't higher is because of misinformation. The biggest reason there has been resistance to the idea of community-based campaigns that include door-to-door outreach is because of deliberate disinformation created to twist an attempt to help people into something that gives Republicans a political advantage. For example, President Joe Biden had barely voiced the need to get more volunteers out there when Republicans like Missouri's Mike Parson popped up to claim that the Show-Me State doesn't need anyone showing them facts about COVID-19.

But these efforts were underway before Biden gave his speech. The reason Biden mentioned this kind of outreach was because it had been proven effective in locations from Florida to Alabama to Missouri to Massachusetts. Red states or blue, people respond best to information and offers of assistance when they come from inside their own community. That's why this kind of action has been singularly effective in past epidemics, including Ebola outbreaks in Africa.

There have been fantastic efforts at community outreach in:

Those are just a few out of hundreds of such community-based efforts across the country. In almost every case, these volunteers had to push back against resistance and distrust generated by vaccine disinformation, but the success is there in the numbers of those vaccinated, and the lower number of COVID-19 cases in the communities they serve.

There are places in Puerto Rico where vaccination rates are lower, but those lower numbers don't seem to be because of political barriers. Instead, they are mostly poor, rural areas where the overstretched health care system has poor reach in the best of times. So Puerto Rico is also mounting a door-to-door campaign, bringing vaccine to the people who can't come to get it.

The rest of the United States would benefit a lot from being more like Puerto Rico when it comes to dealing with COVID-19. And maybe in return for these vital lessons, we could give them a few things … like statehood, representation in Congress, a working power grid, and enough funds that their health care system isn't always at its limits.

*Adjusted for inflation since the National Institutes of Health estimate in 2007.

When it comes to "Do as I say and not as I do," Republicans have no competition. Forgetting how they once assailed Hillary Clinton for conduct that doesn't even resemble Trump's colossal corruption, they've unleashed a butthurt fury at the Justice Department over the FBI raid of Trump's residence in Mar-A-Lago.

The Daily Show trounced them for this despicable hypocrisy in a video that highlights Trump's allies "talking about Hillary" while showing FBI agents entering Mar-a-Lago.

(Reuters) -Police were locked in a standoff on Thursday with an armed man who tried to breach the FBI building in Cincinnati, Ohio, earlier in the day before fleeing and exchanging gunfire with officers, authorities said.