How Do We Finally Crush The Virus? A $50 Million Lottery!

How Do We Finally Crush The Virus? A $50 Million National Lottery

In the United States, COVID-19 is rapidly becoming an endemic disease of Republicans. Over the last seven days, the nation has averaged 45.6 cases per 100,000 people, or just under 22,000 new cases per day. That means the average has now dipped below the measure on June 14, 2020, before the second wave swept across the South. In a few days, it's likely that the number will be down to a level matching that within weeks of the first large outbreak in this country (and a point where numbers were still largely constrained by lack of testing). That represents a tremendous drop from a national number that topped 750 cases/million, or roughly a quarter million a day, in January.

The reason for the decline is simple enough: As of Thursday, 62 percent of American adults had received at least one dose of COVID-19 vaccine. In 10 states, most of them in the Northeast, that number now exceeds 70 percent. However, a number of other states are lagging tremendously. That includes eight states where the rate is below 50 percent.

And the truth is, even the best of those number is not enough. That 70 percent of adults—which is only about 50 percent of the total population—is well short of what we need. Unless the U.S. can reach a number that's close to 80 percent of all people being vaccination, it is unlikely to achieve herd immunity given the high rate of transmission among more recent variants of the SARS-CoV-2 virus. If that number can't be achieved, COVID-19 numbers will go down but the community spread of the disease won't go away, and that has serious long term implications that go beyond questions of masks and frustrations about when it's safe to fully open X, Y, or Z.

How do we get enough people engaged to make that happen? Bribe them. Because it's worth it.

Last week, the Associated Press ran an article on the growing concern over this vaccination gap, which was careful to talk about the difference among states and the rural-urban gap within states while mostly tiptoeing around the cause. But there's really only one cause. 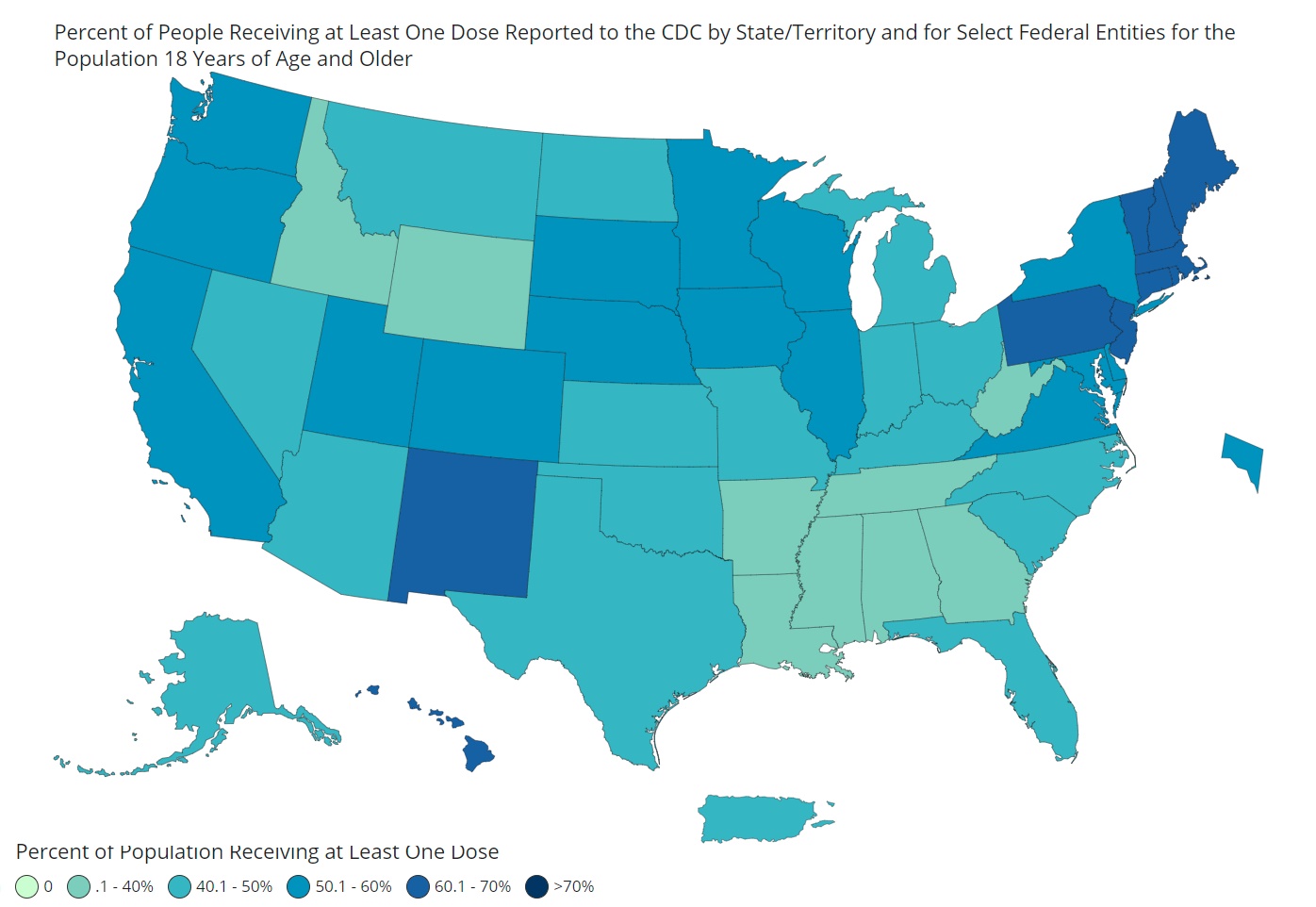 In the last six weeks, Pfizer's vaccine has been approved for use in those between ages of 12 and 18. Moderna's vaccine should be approved for the same age range within the next two weeks, with Johnson & Johnson close behind. About 6 million Americans between 12 and 18 have been vaccinated already, and that number should accelerate—especially if states or local school districts require vaccination before students can return to school in the fall. That change in the availability of vaccine is actually visible in the national rate of vaccine administration in the form of a little "bump" starting in mid-May. 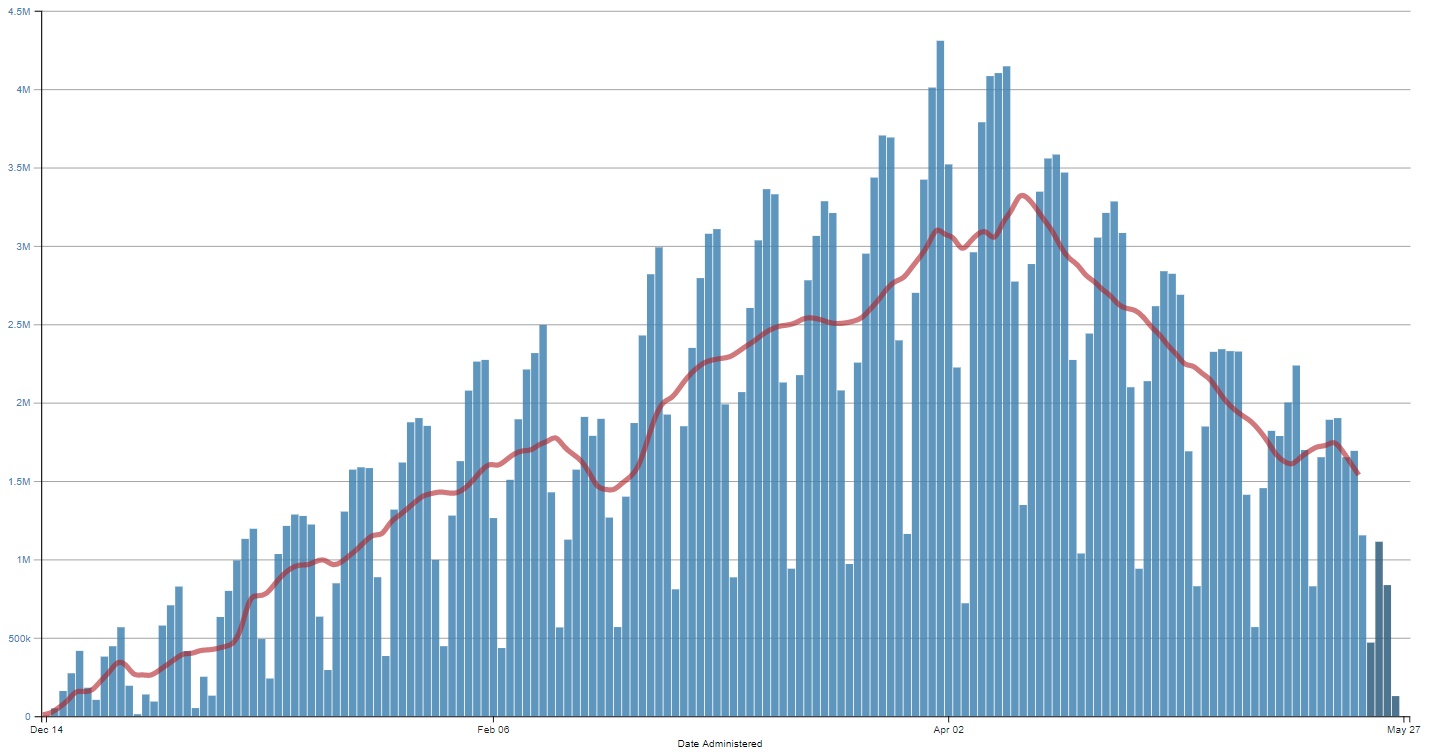 Daily count of total doses administered and reported to the Centers for Disease Control and Prevention.

That the vaccine numbers peaked and then began to fall may seem like failure, but it's actually inevitable. After all, people can only get vaccinated once (or, you know, twice) and eventually everyone is vaccinated. The real problem with this chart is that the peak should have come about a month—and about 50 million Americans—later.

There is some indication that Republican resistance is softening. The numbers giving a definitive "no" began to fall slightly around the same time the Centers for Disease Control and Prevention (CDC) cleared the vaccine for those aged 12, and there was a recent survey from the Kaiser Family Foundation showing that 40 percent of those in the "wait and see" group could tip to the "yes" category if the vaccines gain full FDA approval. Which is good. But it's still not enough, as that would only add three to four percent more to the totals.

Which brings us to incentives. Ohio has now announced its first million-dollar winner in a vaccine lottery, and as The New York Times reports, the idea is picking up steam across the country. That's because, as Axios has charted out, the idea seems to have worked. Ohio didn't just hand out $1 million to a lucky 22-year-old young female engineer, it also generated a measurable increase in vaccinations.

In fact, Ohio's experiment has been successful enough that California, Colorado, Maryland, and Oregon have signed up to offer similar incentives. And that's great. Except that these are some of the same states with high levels of vaccination already. The incentives might be able to push those areas above the magic number, but what it won't do is save us from where we're going right now—toward a point where COVID-19 is an endemic disease of Republican-dominated communities.

On the one hand, it may be easy to shrug off that result. On the other hand … no. Giving COVID-19 the chance to continue bouncing around between millions of Americans means not just more variants, but also more exposure for those who can't, for genuine medical reasons, be vaccinated.

So here's a simple solution: a national lottery. Toss $50 million into the pot and hand out a million-dollar prize to some lucky someone, anywhere in the nation, who has received a vaccine—with a new prize being awarded only when the nation goes up another percentage point in total vaccination. Televise it. Let President Joe Biden put his hand in a fishbowl. Do whatever it takes to get people to get a jab in the arm.

Seeing those who have spent months denying COVID-19, scoffing at the vaccine, and sneering at people wearing masks suffer the consequences may seem like karma. But it's also keeping the nation at risk.

National lottery. Let's do it.

From Your Site Articles
Related Articles Around the Web
vaccine lottery

I used to think self-styled “progressives” and Black Lives Matter activists had coined the dumbest political slogan of the twenty-first century: “Defund the Police.” Democratic strategist James Carville called it “the three worst words ever in the English language.” Not for nothing has President Biden gone out of his way to declare, as reported by the New York Times’ Charles Blow, that “when it comes to public safety in this nation, the answer is not ‘defund the police.’ It’s ‘fund the police.’”

Jimmy Kimmel has been reading Confidence Man by New York Times reporter Maggie Haberman, and the late night comic was amused to learn that Trump intended to fire daughter-bride Ivanka and her husband, Jared Kushner, who were both White House advisers, on Twitter.