An anti-vaccine Facebook group and network of 17 affiliated state-specific groups have been using the social media platform to spread coronavirus conspiracy theories and misinformation, including a viral video falsely claiming that wearing masks could increase chances of getting coronavirus.

United States for Medical Freedom is a Facebook group with over 28,000 members that uses seemingly benign language to obfuscate its anti-vaccine message, claiming that its goal is to fight for "Medical Freedom & Autonomy." Since the group was created in September, members and the administrators of United States for Medical Freedom have frequently posted about opposition to vaccines, including misinformationaboutvaccines and callstoaction against vaccination policies. One of its administrators claimed she testified on behalf of the group against Massachusetts bills regulating vaccinations necessary to enroll in school.

Along with this group, there are at least 17additional groups representing different states in a network with almost 10,000 members combined. Nearly all of these groups are run by teamsthat includetwo of the administrators of United States for Medical Freedom, making it very easy to spread misinformation around the network. 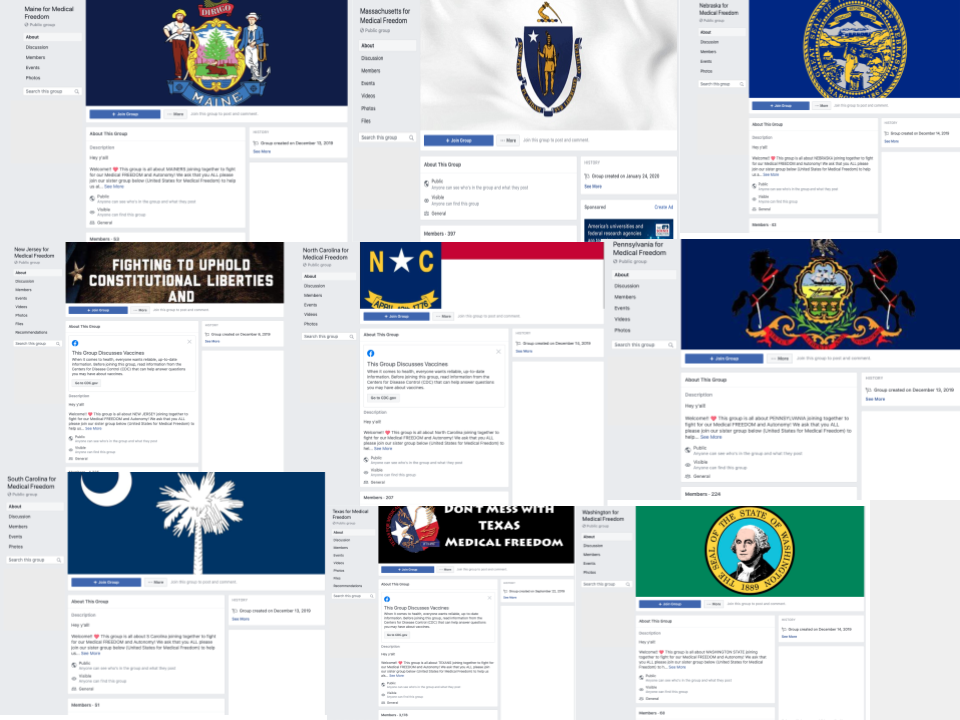 For example, one of these administrators utilized this network to quickly spread a video filled with misinformation -- including false claims that COVID-19 is no different than the flu and that wearing masks increase the chances of people getting the virus -- posting it in 11 of these groups within minutes. 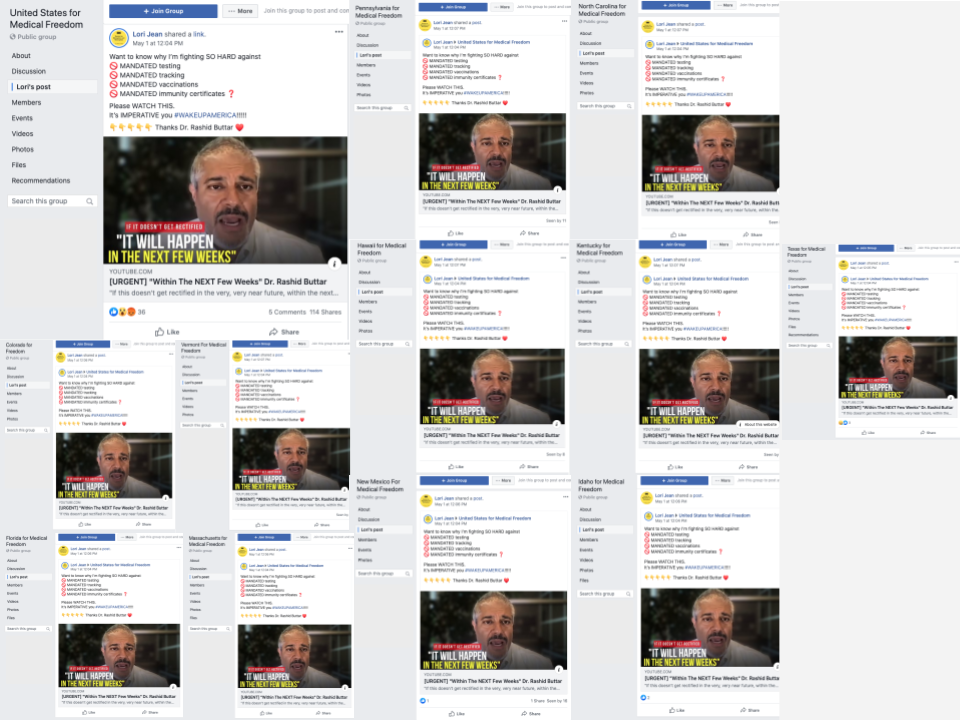 When the first cases of COVID-19 were announced in the United States at the end of January, posts hinting at a conspiracy theory blaming Bill Gates for the pandemic immediatelyemergedin thegroup. Other posts alluded to different conspiracy theoriesabout theorigin of the novel coronavirus, attemptedtodiscredit National Institute of Allergy and Infectious Diseases Director Dr. Anthony Fauci, and promoted medical misinformation, such as unproventreatmentsorsupposed preventative measures for COVID-19.

In addition to amplifying other protest efforts, the Texas for Medical Freedom administrators also hosteda protest in Austin, Texas, on April 16. These administrators are also encouraging members to defy stay-at-home orders and joinprotesters, many of them armed, to defendbusiness owners who are reopening in defiance of current Texas guidelines. Inaseriesofpostsandlivevideos, the group's administrator Lori Jean encouraged people to rally in support of Shelley Luther, who opened her hair salon in Dallas and gainednational attention after she was arrested.

New Jersey for Medical Freedom also hosted a protest against state stay-at-home orders, and the group's administrator Ayla Wolf has been involved in organizing events with the Facebook group Reopen NJ. Wolf evenspoke at one of the events and has claimed that she was criminally charged for organizing a protest.

In another example of how these groups spread misinformation, a video featuring a range of conspiracy theories and debunked medical misinformation was shared across this network. The video earned more than 9 million views on YouTube and more than 16 million Facebook engagements before the platforms announced that they would remove the video and any reposts. Notably, the video was posted at least27 times in United States for Medical Freedom and its state groups. 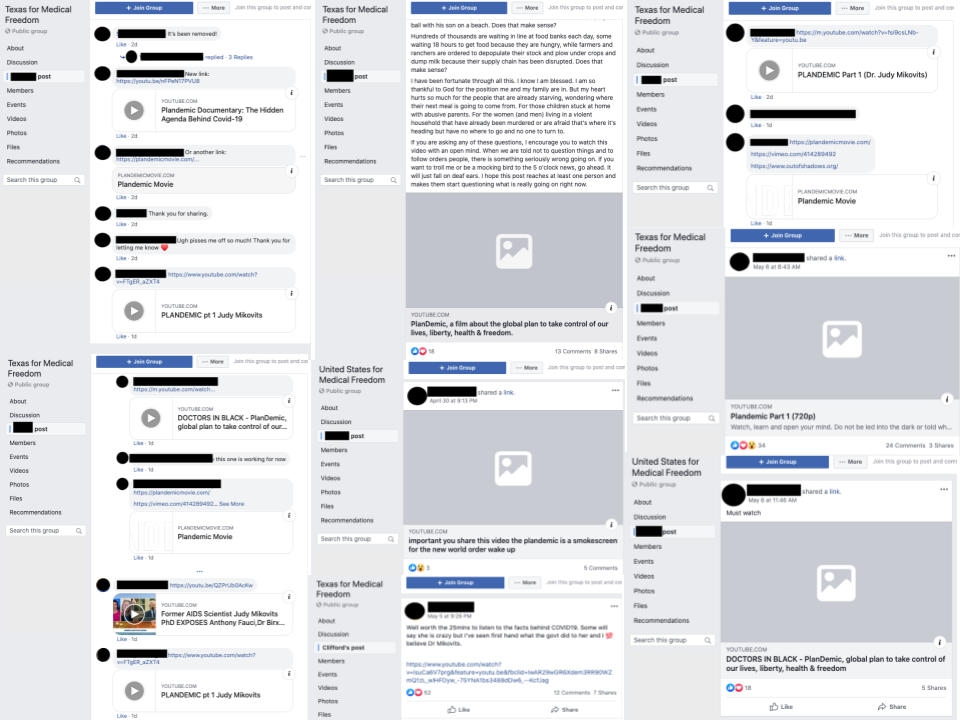 Even before the video, many of the conspiracy theories and misinformation it promoted were already circulating within the network of 18 anti-vaccine Facebook groups. Here are some of the posts with the most egregious examples.

False claim: The coronavirus is actually a bioweapon 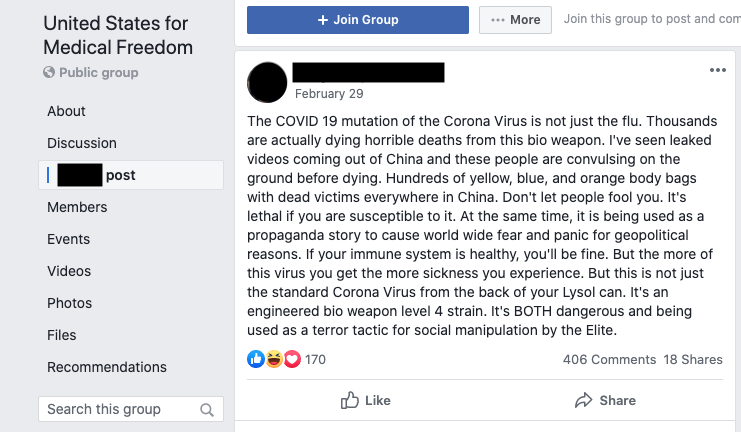 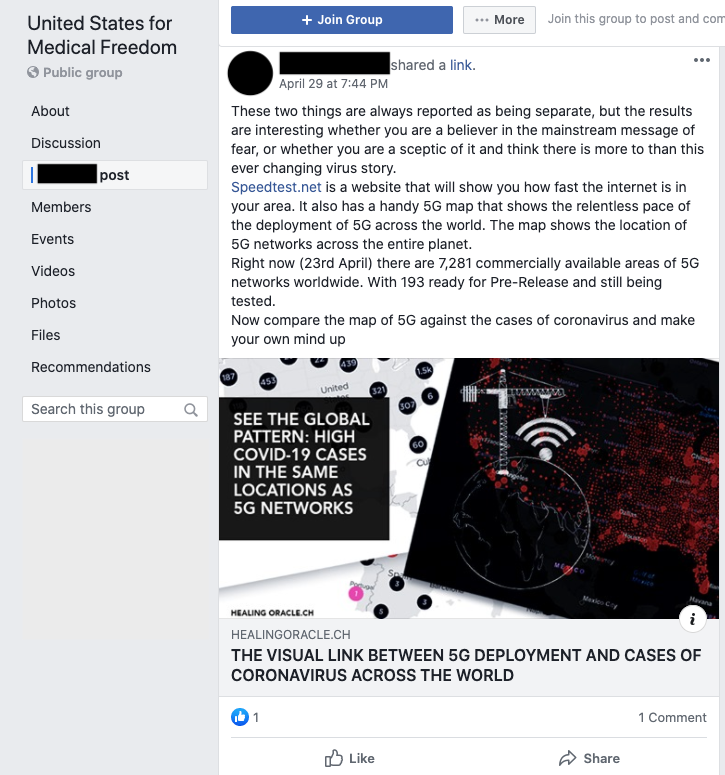 False claim: The pandemic was planned to create a global surveillance state with 5G technology 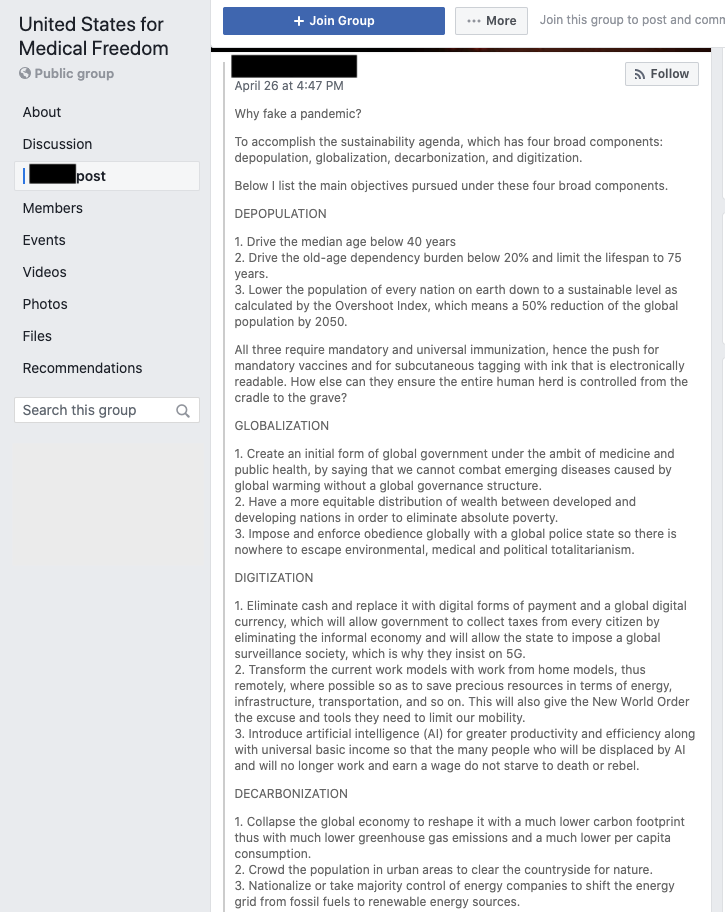 False claim: Governments are using the virus as an excuse for mass surveillance 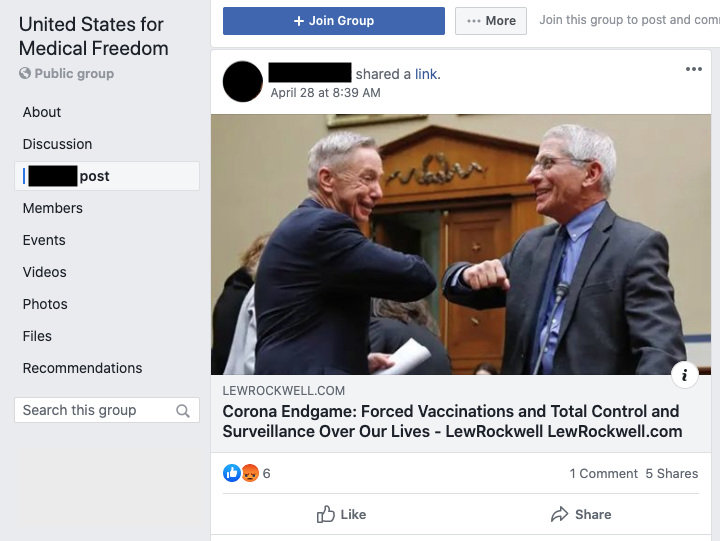 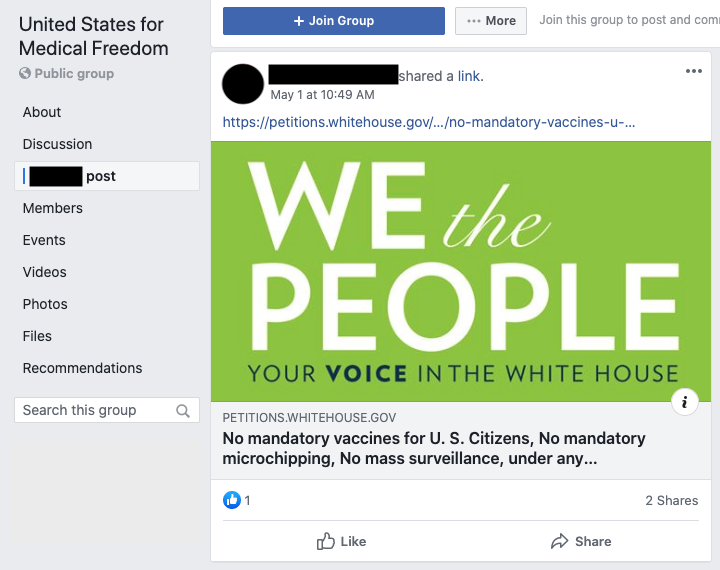 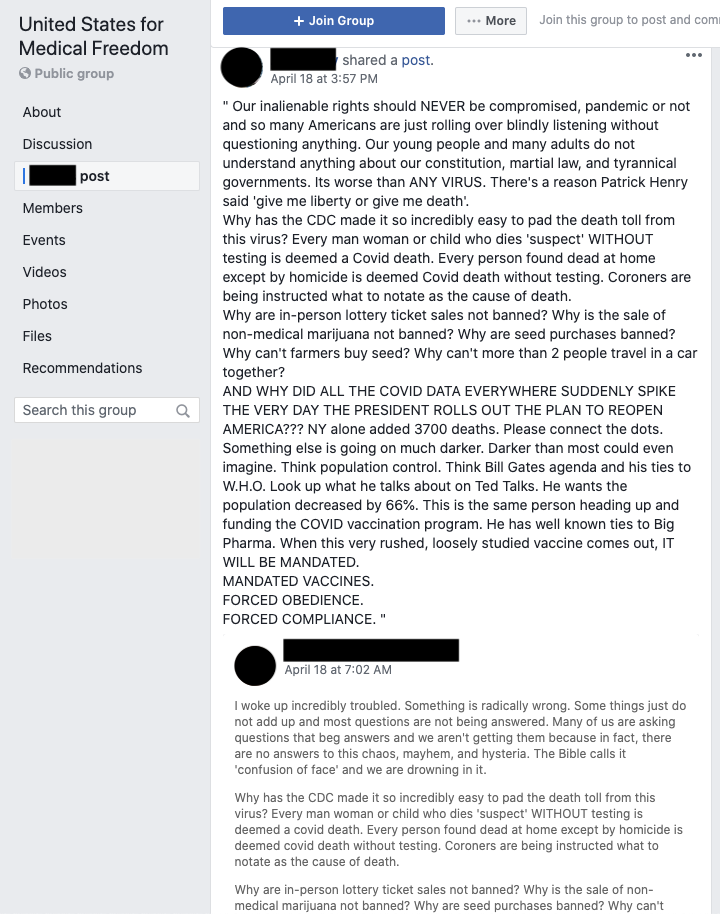 False claim: The pandemic was planned by Gates to force a vaccine on people 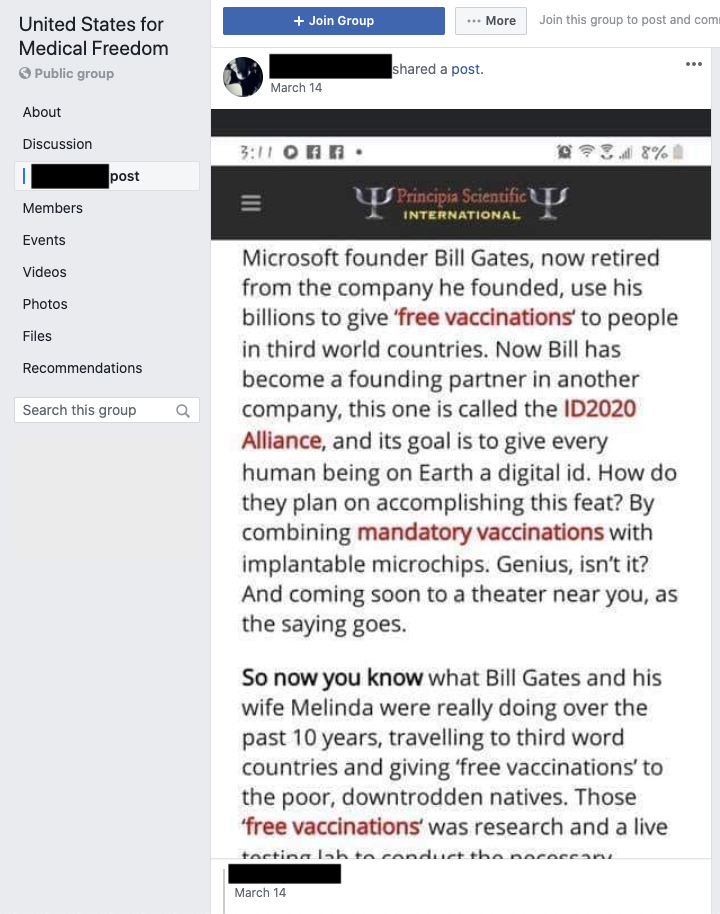 False claim: The pandemic was planned by the 'deep state' as part of the QAnon conspiracy theory 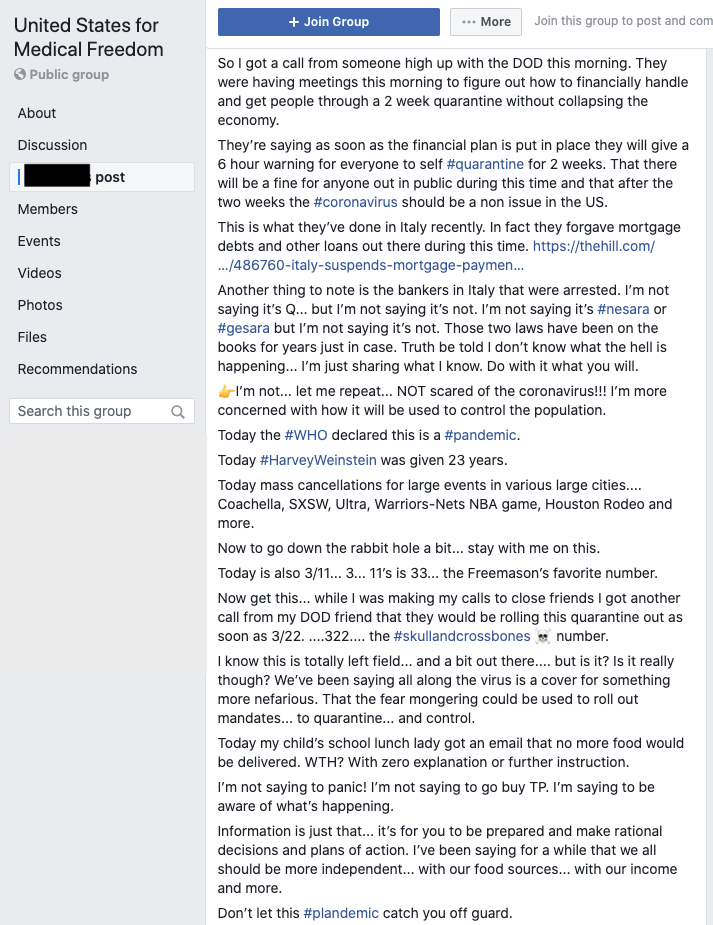 False claim: The pandemic was planned by Gates to implant people with microchips 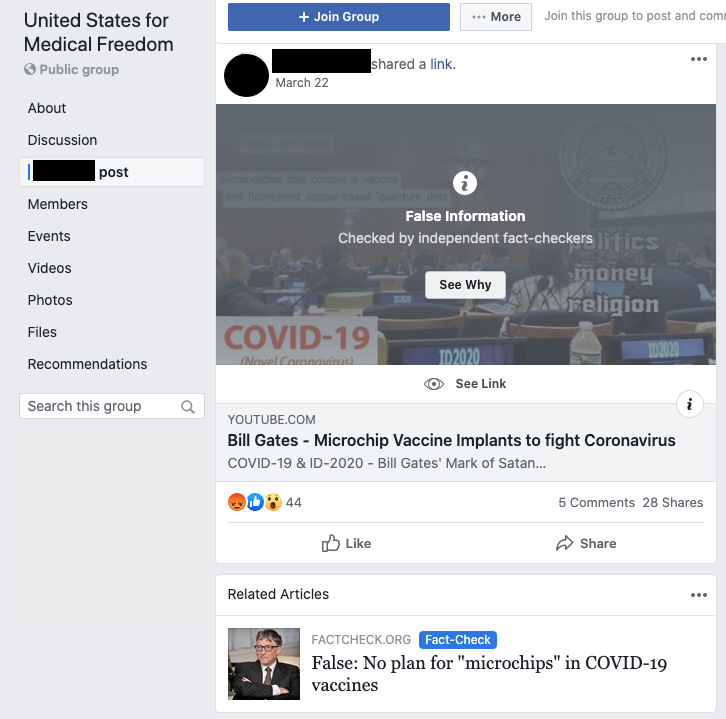 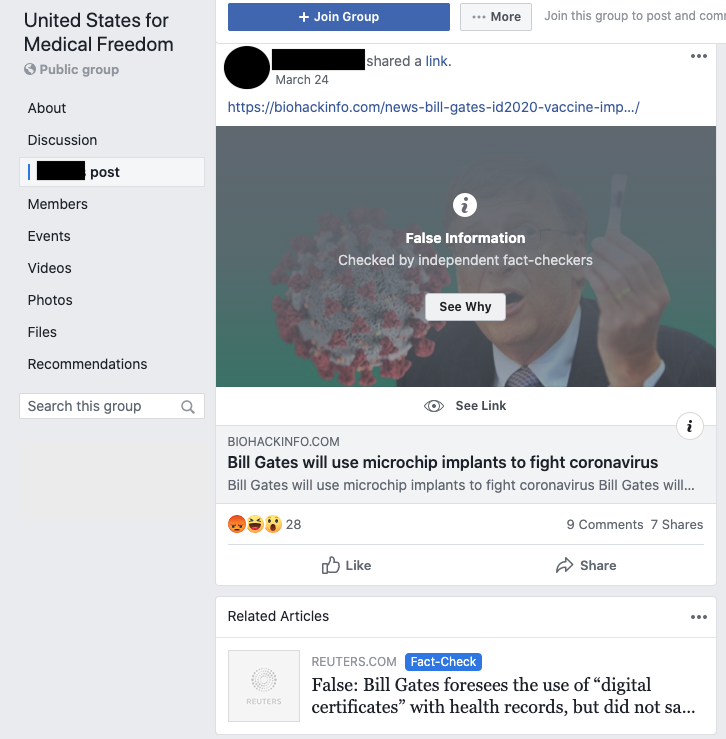 False claim: The flu vaccine increases the odds of people getting COVID-19 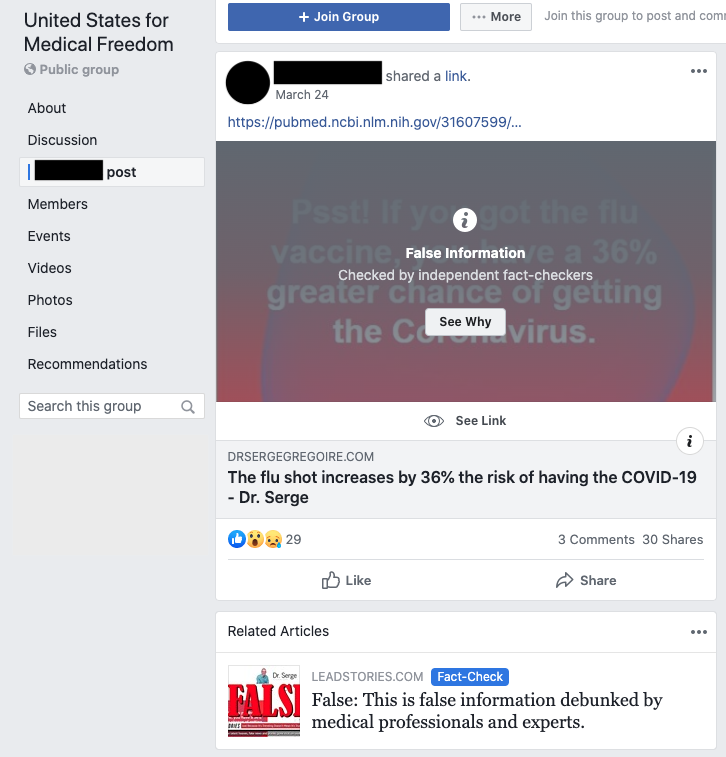 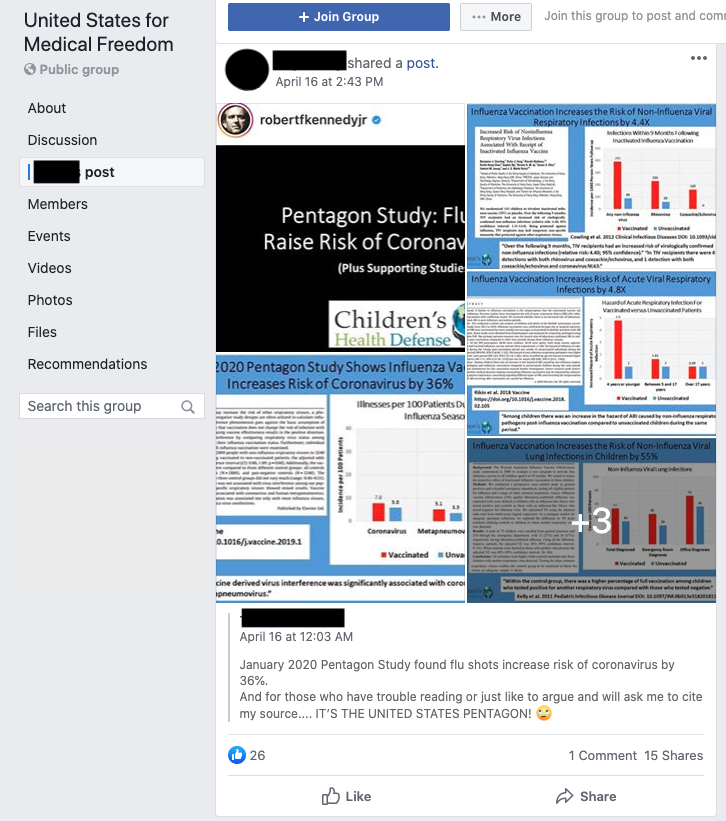 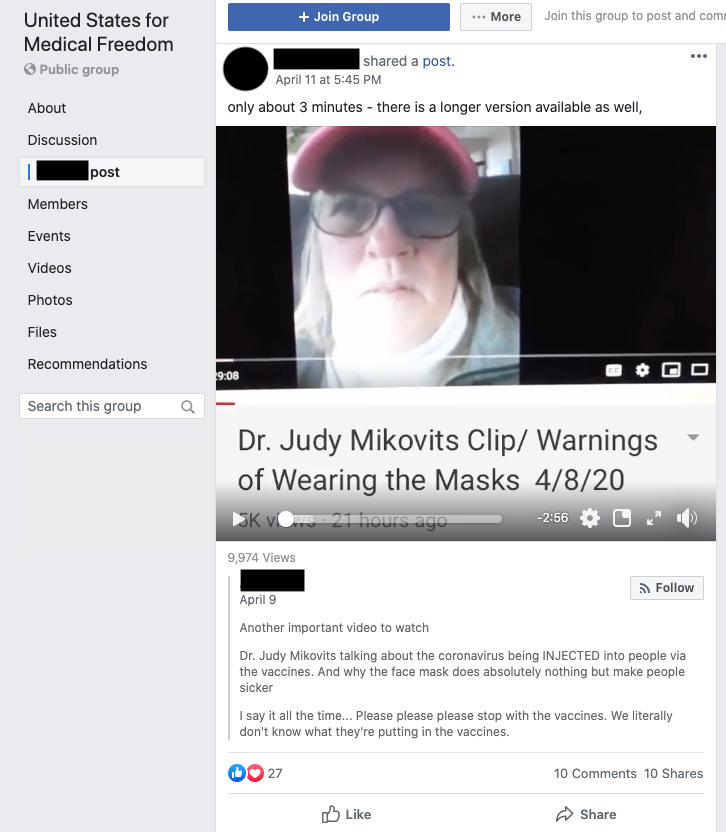 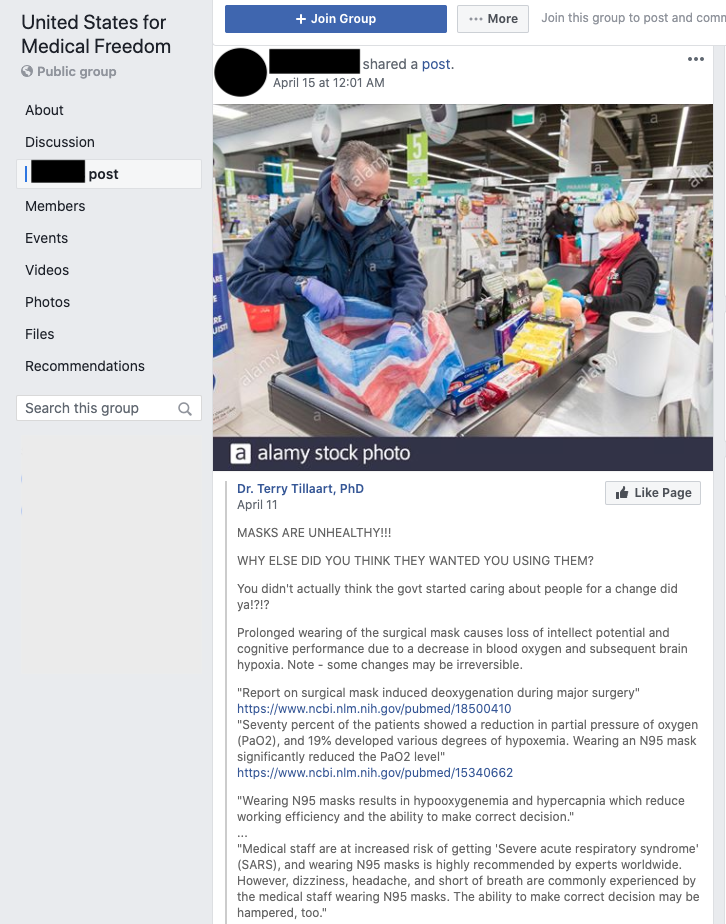 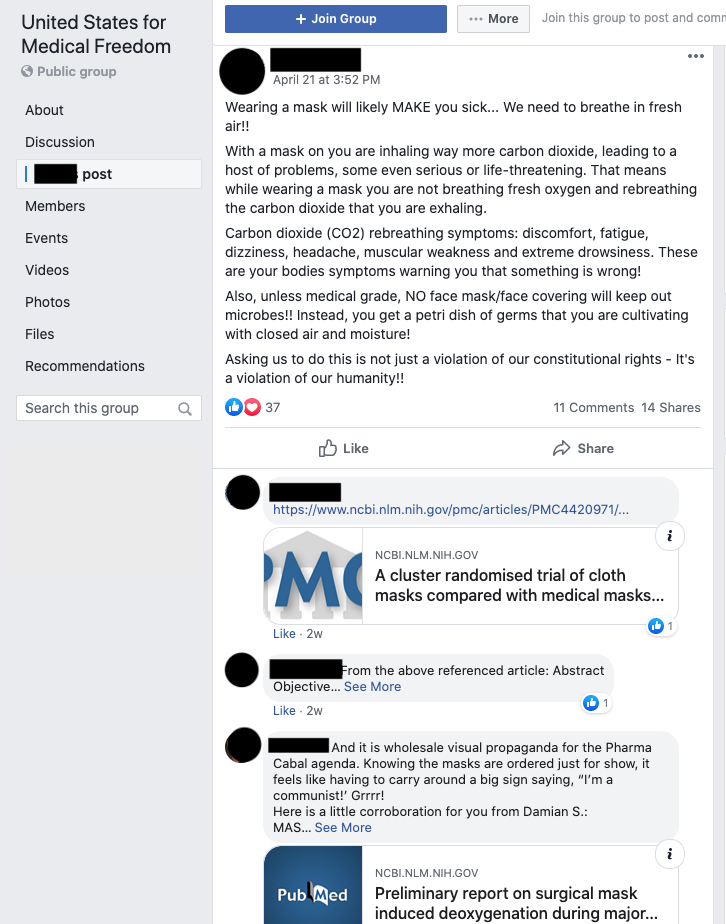