Earlier this month, a study out of the Institute for Health Metrics and Evaluation (IHME) projected the actual number of COVID-19 deaths in the United States at over 900,000—far above the official numbers listed by the Centers for Disease Control and Prevention or state agencies. While that study was based on projections and evaluation of excess mortality in 2020, it seems to be validated by numerous reports of deaths that were overlooked or never evaluated, especially those occurring outside hospitals.

The IHME study suggested that the same massive undercount was likely to be true around the world, and now the World Health Organization is saying something very similar. At this point, total global deaths from COVID-19 may be between 6 and 8 million—twice the official value of 3.4 million. That still doesn't put this pandemic on par with the 1918-1919 flu pandemic, which killed at least 17 million, but the higher number makes COVID-19 not just the worst pandemic in a century, but among the largest pandemics over a much longer period.

In other words, if the last 18 months has seemed like a truly unusual period, that's because it has been. And as better numbers appear conveying the huge scope of what has happened, it becomes more important to recognize the measures that had, so far at least, prevented COVID-19 from climbing the chart of all-time human disasters.

As The New York Times reports, at least 3 million people in the the 6-8 million death estimate are believed to have died before the end of 2020, compared to a reported total of 1.8 million. In the United States cases of COVID-19 may have peaked in the first weeks of January, but around the globe, cases reached an even larger peak in April and are only now starting to drop as case counts in beleaguered India decline.

India is one of those nations where the official totals are expected to diverge most widely from genuine losses. Total deaths there are still listed at less than 300,000—about half the official total for the United States—but each day of the shocking spike in cases that began at the end of March has produced reports of thousands of uncounted deaths. On some days, local officials reported more deaths in a single city than the official records recorded for the nation. How, or if, all of this will eventually be reconciled is an open question.

The other thing that needs to be considered is that the pandemic is not over. No matter how many stories run about Europe reopening for tourists, or mask mandates being dropped across America, the areas that have already experienced widespread COVID-19 are just a subset. Many countries in Africa had little experience of the disease through the last year. In Asia, a number of nations that appeared to have "beaten COVID-19" are now seeing record levels of cases as world travel increases and new variants are spread.

Just looking at a few relatively wealthy nations, it's easy to see that the level of vaccination around the world varies widely. 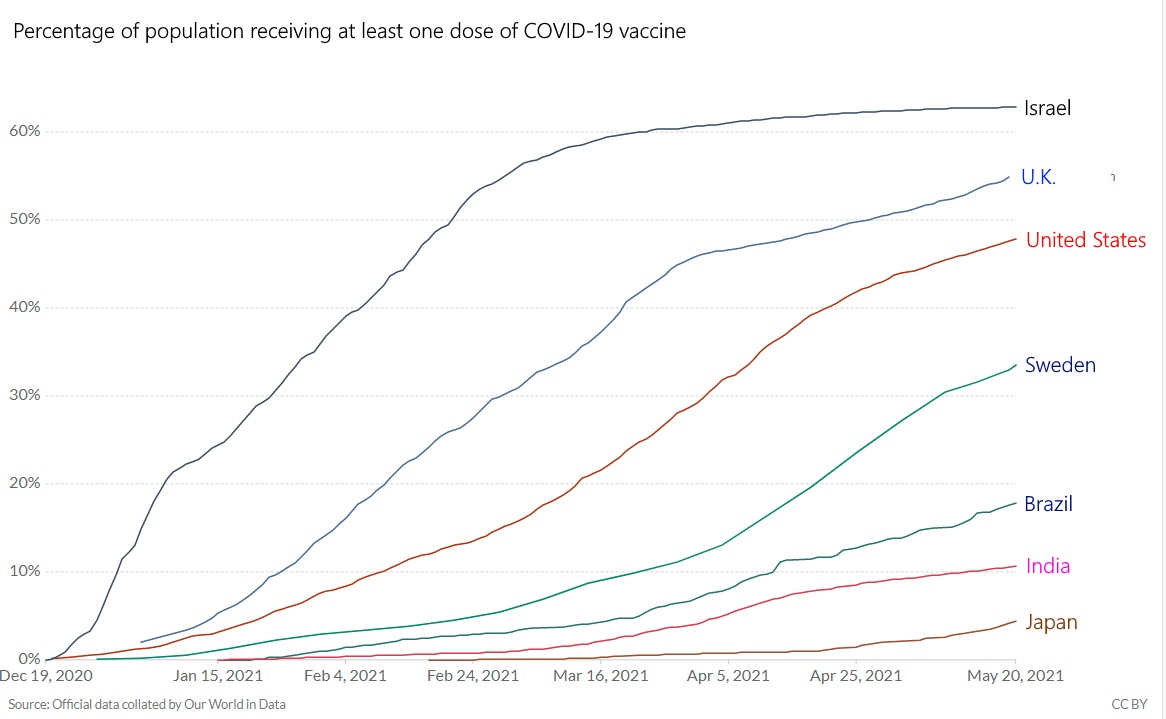 Even nations with access to COVID-19 vaccine have a huge disparity in levels of vaccination. attribution: Our World In Data

Across Africa, there are more than two dozen nations where less than 2% of the population has been vaccinated. Many of these nations either have no reserve of vaccine, or may be getting vaccines that are significantly less effective than those being passed around wealthier nations.

Regardless of how the epidemic of cases shaped up in the U.S., a chart of reported cases around the world shows why this pandemic isn't anywhere close to over. 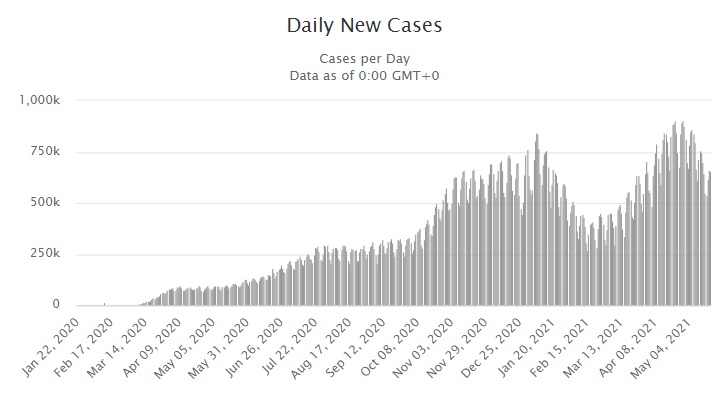 Global daily cases of COVID-19 remain high, and the trend is still going up. attribution: WorldOMeters

New cases of COVID-19 around the world are exceeding half a million. The overall trend in cases remains an upward one. Only a tiny fraction of the world has been vaccinated, and most of that fraction is concentrated in a few wealthy nations. Not only does the potential exist for this pandemic to get much worse across the globe, the huge reservoir created by all these cases provides plenty of raw material for new, more dangerous variants.

Getting vaccine not just delivered to other nations, but into the arms of the world's population, is a national security issue for the United States.

Politico reported Friday that John Eastman, the disgraced ex-law professor who formulated many of former President Donald Trump’s efforts to overturn the 2020 election results, was also apparently in communication with Fox News host Mark Levin. The story gets even more interesting from there, revealing the shell game that right-wing media personalities engage in while doubling as political operatives.

A legal filing by Eastman’s attorneys reveals that, among the messages Eastman is still attempting to conceal from the House January 6 committee are 12 pieces of correspondence with an individual matching Levin’s description as “a radio talk show host, is also an attorney, former long-time President (and current board chairman) of a public interest law firm, and also a former fellow at The Claremont Institute.” Other details, including a sloppy attempt to redact an email address, also connect to Levin, who did not respond to Politico’s requests for comment.

There have been powerful indicators of the full-bore radicalization of the Republican Party in the past year: the 100-plus extremist candidates it fielded this year, the apparent takeover of the party apparatus in Oregon, the appearance of Republican officials at white nationalist gatherings. All of those are mostly rough gauges or anecdotal evidence, however; it’s been difficult to get a clear picture of just how deeply the extremism has penetrated the party.

Using social media as a kind of proxy for their real-world outreach—a reasonable approach, since there are few politicians now who don’t use social media—the Institute for Research and Education on Human Rights decided to get a clearer picture of the reach of extremist influences in official halls of power by examining how many elected officials participate in extremist Facebook groups. What it found was deeply troubling: 875 legislators in all 50 states, constituting nearly 22% of all elected GOP lawmakers, identified as participating members of extremist Facebook groups.