How America Can Achieve Herd Immunity Despite Republican Stupidity

This is the good news: COVID-19 vaccines are safe, effective, and lasting. The vaccines already looked good in their phase 3 trials before release, but since they've gone into widespread use, they've actually exceeded expectations. Since the vaccines first went into use, there are now additional months' worth of data showing that those who participated in the trials for these vaccines are still enjoying a powerful immune response to the SARS-CoV-2 virus more than six months later. Odds are very good that the real duration of these vaccines will exceed a year.

This is the bad news: The United States is unlikely to reach herd immunity. That doesn't mean that COVID-19 will continue to burn through the population, producing thousands of new cases and hundreds of deaths each day. The number of people already vaccinated, and those who say they still intend to be vaccinated, is enough that the rate of transmission will be impacted significantly. However, not enough people are getting vaccinated to truly end community transmission. So it's extremely likely that COVID-19 will become an endemic disease, flaring up from time to time in communities where vaccination rates are too low, and constantly threatening to toss off a new variant that puts everything back at square one.

The reason for this hasn't changed. It's Republican resistance to vaccination. Despite everything, including the evidence of hundreds of millions of people who have been vaccinated and not either burst into flames or fallen on their knees before Bill Gates, 46 percent of Republicans still say they will not take the COVID-19 vaccine. Because of that, even if everyone who currently says they will get vaccinated gets their jab, and everyone who says they're still uncertain decides to join in, it's still only going to be about 60 percent of the population. That's not enough.

But there's a reason to hope this isn't permanent.

If the numbers from Civiqs vaccination data are totaled up, it actually comes to 76 percent. The number of people who have been vaccinated has corresponded closely with the Centers for Disease Control and Prevention (CDC) data on vaccination since the start of the year, with the Civiqs response "I have already been vaccinated" consistently falling just a percentage point or two behind the CDC value for the percent of the population over 18 that has received at least one shot.

If 76 percent of the population were to be vaccinated, it might actually be enough to reach, or at least approximate, herd immunity. It's unclear what the magic number really is for COVID-19. Somewhere in the 70 percent range was likely sufficient for the variants that first swept the United States. However, more recent variants are contagious enough that they might need something like 90 percent — the kind of numbers usually associated with extremely contagious diseases like measles.

But the reason that the Civiqs 76 percent isn't really 76 percent of the population is a paragraph back in the definition of the matching CDC number: "of the population over 18." The Civiqs data, like the CDC data, has so far been limited to adults. (Note: There's actually a bit of a gap in the existing data as the Pfizer vaccine is actually authorized for those over 16 rather than 18.)

Since children under 18 make up over 20 percent of the U.S. population, it's nearly impossible to reach real herd immunity until some of the vaccine goes to younger people. Fortunately, that's going to happen soon. The FDA is preparing to authorize the use of Pfizer's vaccine in children as young as 12.

This follows a report from Pfizer at the end of March in which they indicated a vaccine efficacy of 100 percent in a trial of over 2,000 volunteers between the ages of 12 and 15. Based on that data, Pfizer is expected to ask the FDA to modify the existing emergency use authorization to extend the use of their vaccine down to children as young as 12 right away. Pfizer is also conducting trials on children as young as 6 months old, and expectations are that they will submit an emergency use authorization for vaccine use down to the age of 2 sometime later in the year.

Pfizer isn't alone. Moderna is also engaged in a phase 2/3 trial for kids down to 6 months old and should be reporting results from its trial of 12 to 17 year olds in the next few weeks. Johnson & Johnson is also in the midst of a clinical trial on children 12 to 17, but hasn't yet made an announcement concerning children below 12.

All of this suggests that when school starts again next August, it's highly likely that most middle schools and high schools will require children to be vaccinated. There will, of course, be protests from the same Republicans who are refusing to be vaccinated themselves, and any number of local school boards and administrators who join in the anti-vax screeds. Even so, it's likely that the rate of vaccination among younger people will exceed that among adults. Which might be enough to, finally, tick the overall rate of vaccination to the point where community transmission of COVID-19 starts to falter.

Across the United States, Civiqs shows just 15 percent of adults who have yet to be vaccinated but say they still want the COVID-19 vaccine. Breaking that down along party lines, 20 percent of Democrats are still in the "haven't be vaccinated, but want to be" category, while just ten percent of Republicans give the same answer.

With Republicans twice as likely to be resistant to get vaccinated, and vaccine being distributed by population, it's not surprising that many states are seeing vaccine surpluses. In fact, all across the Southeast is a band of states where vaccination rates are low and likely to remain that way as the remaining Republican population shows little interest in being vaccinated. Georgia has shut down all mass vaccination sites, and Arkansas is just one of several states to suspend vaccine orders after being left with a surplus. 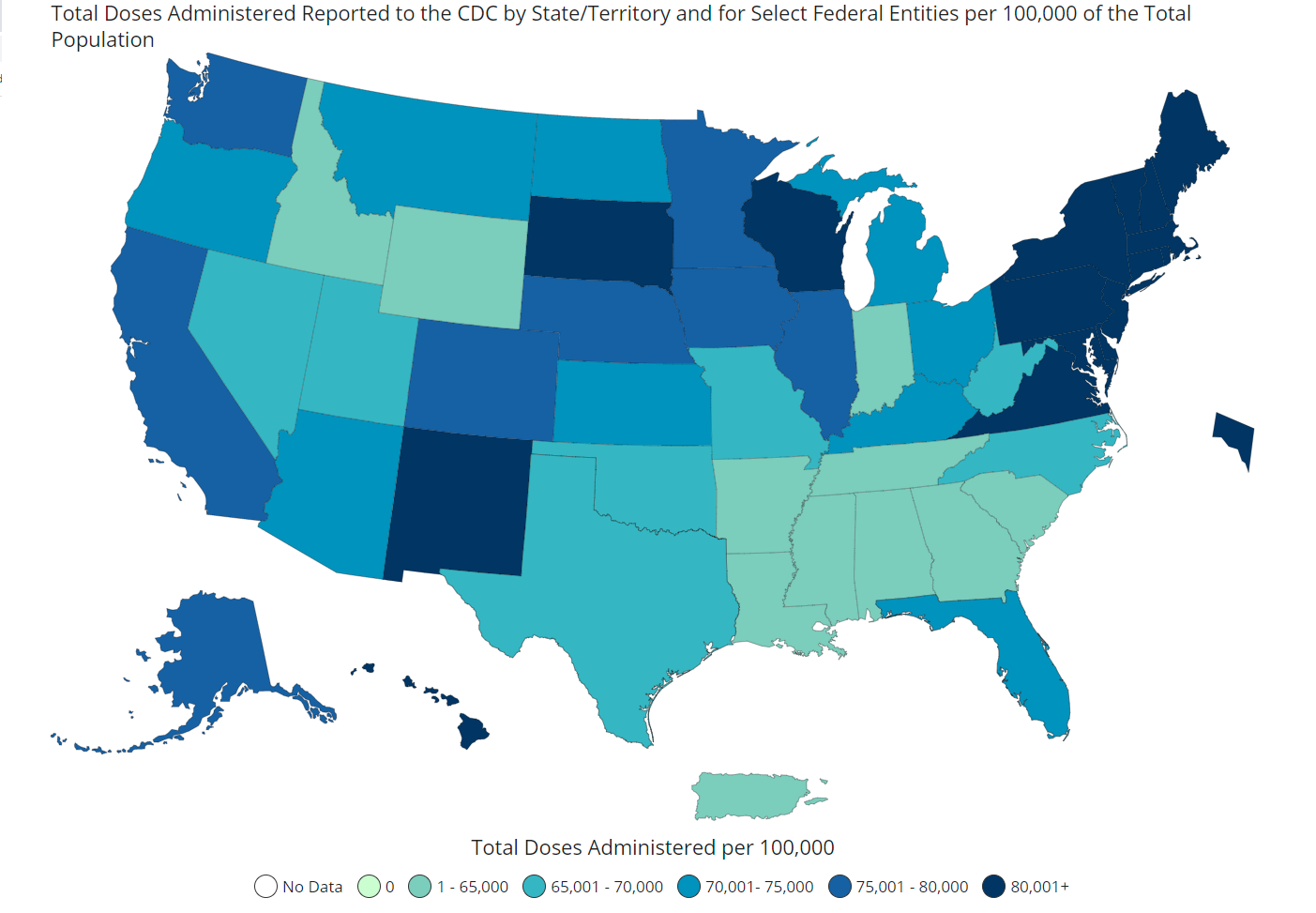 Rate of vaccination by state

There are certainly some surprises on this map, like South Dakota achieving an 80 percent vaccination rate … But then, maybe that's what happens when you're near the top of the charts in cases per population. However, in general, there's a remarkably close match between the rate of vaccination and the percentage of population on either side of the red/blue line. That's because Republican vaccine resistance has been remarkably consistent from the outset. Rather than declining as more information became available, that resistance has actually increased slightly over the last two months.

If you're wondering, four percent of Democrats are saying "no" to the vaccine and three percent still respond that they are "unsure." However, over time both those numbers have been steadily declining.

IT'S NOT JUST INDIA

The situation in India continues to be nothing less than terrible. On Tuesday, India became only the second nation to record 20 million cases of COVID-19, joining the United States in this club no one wants to join. Indian scientists are pleading for the government to be more transparent with the data in order to best address the threat, and there are good reasons to believe the government is vastly undercounting both cases and deaths.

Over the last three days, the number of cases reported each day has dropped from over 400,000 to just over 350,000. That may seem like things are trending in the right direction, but just like in the United States, COVID-19 data tends to have a drop in reporting on Sunday and Monday. (The fact that daily reported deaths are down, despite the sharply increasing case count over the last two weeks, is a very good indicator that this data is incomplete.) It won't be until the final tally comes in from the next two days that it becomes clear whether or not India may have flattened what was a rocketing-upward curve.

However, there are more nations to add to the list of sites where COVID-19 is seeing a massive resurgence. Asian nations like Cambodia, which had done an amazing job of controlling the outbreak there to this point, are seeing thousands of new cases, many of them associated with variants first seen in India. A smaller—for now—spike is still growing in Laos. Thailand, which fought back a wave at the end of 2020, is having an even bigger outbreak now.

COVID-19 is not over. In the short term, what India needs is oxygen, ventilators, personal protective equipment, and medical personnel. Multiple countries, including the United States, are airlifting supplies into the nation, trying to head off the enormous disaster that could result from still-rising case counts and a medical system that's completely overwhelmed.

In the longer term, what India—and every developing nation—needs is to get the vaccine into the arms of their citizens. Which is why the U.S. needs to dispatch more of what's obviously going to be a vaccine surplus their way. And every other nation with vaccine to spare should do the same.

From Your Site Articles
Related Articles Around the Web
Herd Immunity