Sunday show hosts failed to sufficiently press Donald Trump’s surrogates on the president-elect’s blatant lies about voter fraud in the 2016 election. Journalists must raise the bar even higher when interviewing Trump and his surrogates, from merely calling out falsehoods to actively putting statements into context and offering facts and data. Failure to aggressively push back on lies and contextualize misleading statements in the “post-truth” era of Trump risks leaving viewers unclear about which party is ultimately correct and tells them only what they don’t know, rather than ensuring they are informed.

On November 27, Trump tweeted, “I won the popular vote if you deduct the millions of people who voted illegally.” In fact, Hillary Clinton, the Democratic presidential nominee, is expected to win the popular vote by about 2.5 million votes. Additionally, the Washington Post’s Phillip Bump found just three documented cases of voter fraud in the 2016 presidential election. Nevertheless, Trump’s surrogates later defended his lie in a conference call with reporters.

On December 4, CBS host John Dickerson interviewed Reince Priebus, who Trump has tapped for White House chief of staff, on Face the Nation and addressed Trump’s claims that he would have won the popular vote if not for mass voter fraud.

While Dickerson did tell Priebus that “there is no evidence” that millions voted illegally, he made a series of missteps. First, he allowed Priebus to cite a Wall Street Journal op-ed that recycled discredited evidence, failing to note that the evidence was flawed and misleading. Second, while Dickerson asked if Trump needs to “tighten up his standards of proof,” he allowed Priebus to redirect the conversation away from Trump’s lies to a discussion of Trump’s penchant for tweeting in general. Finally, Dickerson never mentioned any of the numerousstudies that show that claims of widespread voterfraud are false.

CBS compounded the problem by issuing a tweet that merely read “Reince Priebus: ‘It’s possible’ millions voted illegally.” Several media outlets have recently botched their headlines and tweets when reporting on false statements made by Trump, omitting context that would illustrate the inaccuracies. 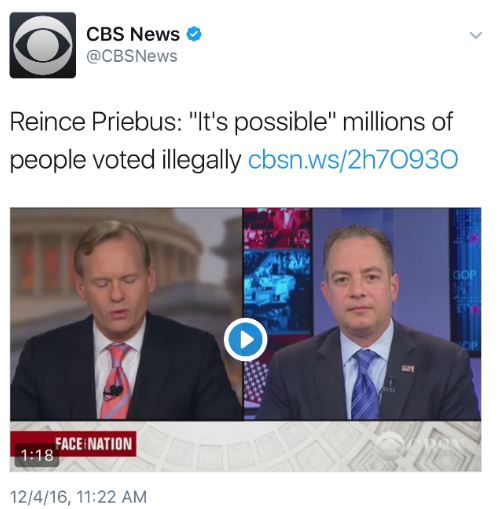 CBS later deleted the tweet, replacing it with this one:

ABC’s George Stephanopoulos interviewed Vice President-elect Mike Pence on This Week and also raised the question of Trump’s voter fraud tweets. Stephanopoulos did repeatedly press Pence to offer evidence for Trump’s claim and consistently pointed out that these claims of voter fraud are false, but he failed to provide counter-evidence to effectively establish that Trump was wrong. Stephanopoulos pushed back on Pence when he cited a Pew Research Center study as evidence that Trump’s voter fraud claims could be true, noting that the authors of the study said “it is not any evidence about what happened in this election.” This pushback, however, was insufficient to properly contextualize for the audience why this evidence is flawed, leaving it up to them to figure out which Pew study is being cited and why it doesn’t apply. Stephanopoulos also neglected to cite studies that provide persuasive proof that claims of voter fraud are grossly exaggerated and largely inaccurate.

Given the total lack of proof for the right-wing’s voter fraud claims, journalists must be prepared to more thoroughly press Trump surrogates if he continues to lie. And more generally, journalists must be armed with the facts and data they need to hold surrogates accountable on the variety of issues about which President-elect Trump lies. In what has been dubbed a “post-truth” presidency, it will no longer be sufficient to merely say “that’s false.” Journalists must call out instances of cherry-picked data or flawed sources and counteract the misuse of data. Journalists can and must harness the power of fact-checking by using studies and data to relentlessly press Trump and his surrogates in order to convey the truth to the American public.