How A 'Disinformation Bubble’ Enables The Trumpist Coup Plot

President Donald Trump and his supporters are actively working to overturn the results of the election he lost to President-elect Joe Biden in order to keep him in power. Their despicable plot revolves around disenfranchising hundreds of thousands of Americans, in large part voters of color, on the grounds that their ballots were fraudulent. Their claims have been thoroughly demolished in legal proceedings finding no evidence that widespread fraud took place, because it did not. Top federal, state, and local officials have said that there were no election security problems, and the president's legal team at times has acknowledged in court that no fraud took place.

But the Trumpist effort to steal the election in broad daylight doesn't rely on whether its arguments can stand up to scrutiny in court. It is a fundamentally political effort. Rudy Giuliani and other members of Trump's legal team are propagating a shambling mass of lies and deranged conspiracy theories about the election. They hope to create enough confusion to give cover to Republican officials at the local, state, and federal level working to subvert the will of the electorate and use their power to preserve the president's. They want local and state Republican officials to refuse to certify election results in key states that Trump lost, in hopes that either Republican state legislators in those states will overturn the results and hand the president a victory or the election is thrown to Congress, where Republicans can grant him a second term.

This seditious conspiracy to shatter American democracy relies on the impermeability of the right-wing information bubble: The facts are not on their side, and the law is not on their side, but the Trumpist media is on their side, so they are banging the table as loudly as they can. They will likely fail -- in no small part because the key players in the would-be coup are incompetentloons -- but the cost America pays will be high nevertheless.

GOP leaders spent decades building an elaborate disinformation network of partisan media outlets and telling their supporters not to believe reporting from mainstream news sources. It worked -- polls show that Republicans overwhelmingly trust right-wing outlets with low or nonexistent journalistic standards and scorn more credible news outlets, and the president's most fervent supporters are Republicans who trust Fox News. A vast swath of the public is now firmly ensconced within an alternate reality, making decisions about not only politics but their personal health and safety based on propaganda and conspiracy theories.

Within that right-wing information bubble, it is virtually uncontested that Trump is correct that the 2020 election was rife with voter fraud and that he actually won if you only count the "legal votes." The result is that polls show a majority of Republicans say that the election was stolen from Trump.

Fox declared Biden the president-elect on November 7. But since then, both its news and opinion sides have pushed conspiracy theories about the election and cast doubt on its results hundreds of times. 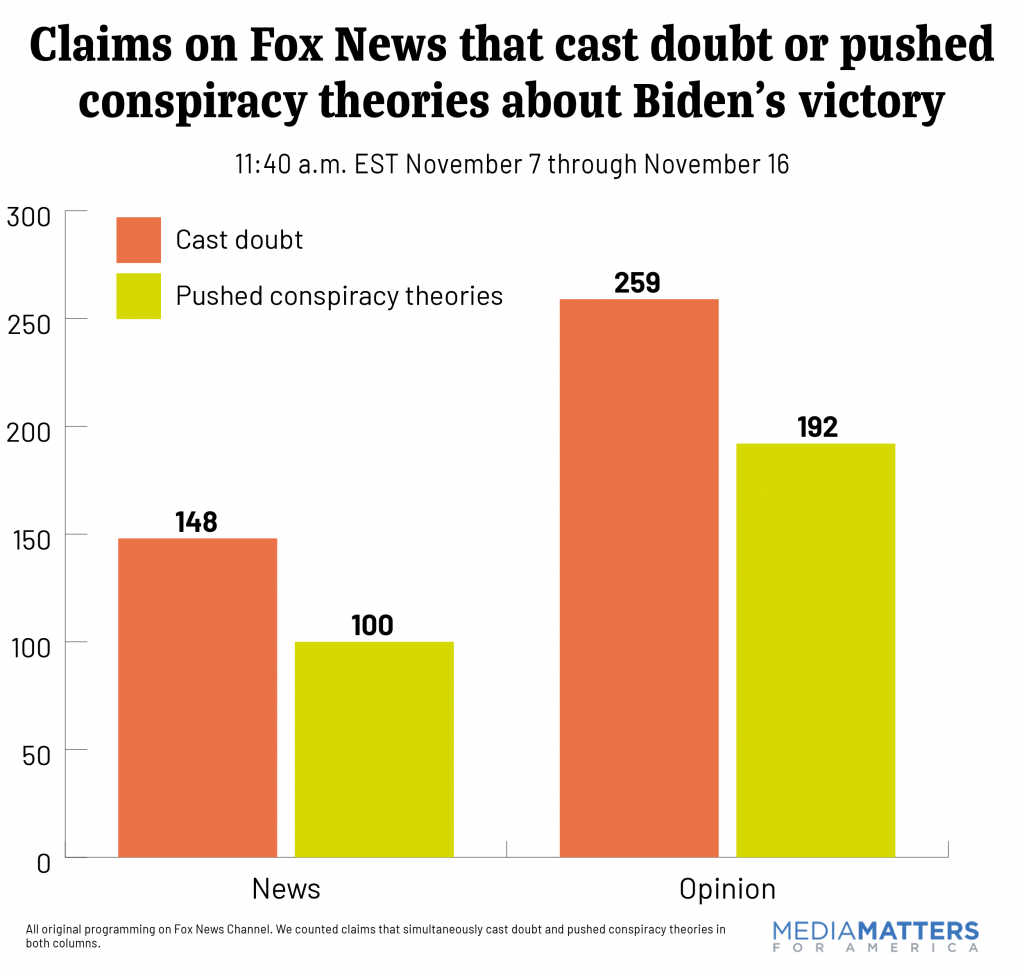 Fox hosts, contributors, and guests have claimed that "many are trying to steal this election from President Trump"; asserted that "many Americans will never again accept the results of a presidential election"; declared that "there's good reason here not to have confidence or not to believe this is fair"; argued that "this is a war, this is a battle for the control of our government and for the future of this nation"; attacked Republican officials for being insufficiently committed to Trump's scheme; called for the arrests of election workers; suggested that Republican state legislators in states Trump lost should "appoint a clean slate of electors" who support him; and demanded lawsuits and congressional investigations. The network has aired promos that hype its prime-time line-up casting doubt on the election.

Fox's work to systemically delegitimize the election is important not only because the network remains the largest and most powerful entity within the right-wing media machine, but because Trump himself frequently watches its programming and amplifies it to his Twitter followers. The president has cast doubt on the election dozens of times in response to Fox's coverage, including by promoting deranged conspiracy theories the network's stars pushed about computer systems changing votes to benefit Biden.

In spite of this barrage of attacks on the democratic process, Fox has actually been under fire from the president's supporters for not going far enough. The network's cable and digital competitors are evencrazier and more propagandistic. And the social media channelsbombarding Republican users are completely unhinged.

The Republican officials targeted by the president's scheme are likely to be either swimming in that fever swamp or dependent on those who do.

At the low end they look like William Hartmann, the Republican member of the Wayne County Board of Canvassers who temporarily blocked certification of the county's election results and subsequently signed an affidavit seeking to rescind the certification. His social media feeds are filled with conspiracy theories about the election from OAN and other far-right sources.

Further up the food chain, Republican members of Congress are going on Fox to promote Trump's election theft.

At every step in the process, at the local, state, and federal level, Republican officials can be pressured by the president's supporters consuming this disinformation. Those are GOP primary voters who likely believe Trump actually won and can threaten the jobs of any politician who takes action to prevent him from staying in office.

This coup is likely to fail; Biden's lead is too great, Democrats hold key offices that can foil the attempt, and the plotters are too nutty. But the Republican base is being primed to treat Biden as illegitimate -- and to question the results of any future elections the party loses. If this behavior is normalized, the next time the right-wing media machine pushes for an anti-democratic solution to an election defeat, the margin may be narrower, the playing field more favorable to Republicans, and the plotters more disciplined.

Our democracy is fragile, and it is under attack. If the truth of the election results can't break through the right-wing information bubble, it may not survive for long.

From Your Site Articles
trump coup

The American right is so awash in grifters weaseling every dollar they can out of their gullibly authoritarian followers’ bank accounts that what used to be a political orientation has just become a massive network of scam artists. Whether it’s Donald Trump ripping off his hordes of fans with bogus email appeals, the “MyPillow” guy and his MAGA cohorts pushing election denialism, Alex Jones and his Infowars operation reeling in the suckers with his health claims, Chris Rufo pitching “critical race theory” and “groomer” rhetoric to the eager media, or white nationalist Nick Fuentes setting up shop in a pricey Chicago suburb thanks to his eager donors, it’s just one big race to suck up those donor dollars.

Crowdfunding at platforms like GoFundMe has become an essential tool for right-wing grifters, notably people like the Jan. 6 insurrectionists who use pleas for legal assistance to suck up thousands of dollars in donations. The Anti-Defamation League this week released a report showing that extremist crowdfunders have generated at least $6,246,072 from 324 campaigns over the past six years—and that their preferred platform by far is GiveSendGo, the conservative “free speech” outfit with a high tolerance for extremism.