How Gab Is Becoming A Platform For Neo-Nazi Propaganda

The CEO of Gab -- a social media platform known as a haven for white nationalists and extremism that is now attracting Republican political figures including Reps. Marjorie Taylor Greene (R-GA) and Paul Gosar (R-AZ) -- has increasingly affiliated himself with a Holocaust-denying white nationalist with ties to the January 6 insurrection as part of efforts to create a “parallel economy” for far-right forces banned from other platforms.

Gab CEO Andrew Torba -- whose account all Gab users follow by default -- has increasingly praised white nationalist Nick Fuentes and his “America First” movement, announcing that the platform would be collaborating with Fuentes to sponsor his upcoming far-right conference, repeatedly promoting Fuentes and his group, and even sending America First content directly to Gab users. Torba has also defended him from backlash after some Gab users criticized the platform’s support for Fuentes, who has repeatedly attacked them.

The platform’s growing relationship with Fuentes and his organization highlights Torba’s own escalating extremism, which includes laudingthe Capitol insurrection as it was happening and urging the insurrectionists to storm the U.S. Senate; endorsing a call for then-President Donald Trump to declare martial law and overturn the 2020 election; and endorsing the white nationalist “great replacement” conspiracy theory. Torba has also used Gab to undermine vaccination efforts and actively courted far-right figures to join the platform, including supporters of the QAnon conspiracy theory.

Fuentes is a Holocaust-denying white nationalist organizer and host of America First who has previously been banned by both YouTube and Twitter. In late 2019, Fuentes came to prominence leading a campaign to have followers of America First harass more mainstream conservative figures, which he called the “Groyper War” (his followers call themselves “Groypers”). He also attended the deadly 2017 white nationalist rally in Charlottesville, Virginia, and encouraged the 2021 Capitol insurrection. Last month, he was subpoenaed by the House January 6 committee over “his ‘America First’ group’s involvement in the run-up to the event.”

Torba announced in January that Gab would be sponsoring Fuentes’ upcoming America First Political Action Conference (AFPAC), calling the event “a group of grassroots young Christian thinkers who, like it or not, are the future of right wing politics in this country.” Fuentes thanked Torba for the sponsorship, claiming the “parallel economy and Gab alternative tech ecosystem are the future.” America First has since announced that Torba will also be a featured speaker at AFPAC.

Torba’s announcement fits with a larger pattern of the Gab CEO praising or promoting Fuentes and his group. A Media Matters review of Torba’s Gab posts since 2019 found that he has mentioned Fuentes or “America First” over 140 times. Torba’s references to Fuentes picked up significantly since the beginning of 2021, having made more than 120 references to Fuentes or “America First” -- over six times as many as in all of 2019 and 2020 combined.

Media Matters’ review also found that Torba has used Gab’s email list to promote content from Fuentes to users at least a dozen times since 2021, including: “Nick Fuentes unmasks gatekeeping Zionists who control the American political conversation”; “Nick Fuentes discusses the enshrinement of anti-white HATRED in public policy”; and a video of Fuentes claiming “the System HATES White People.” 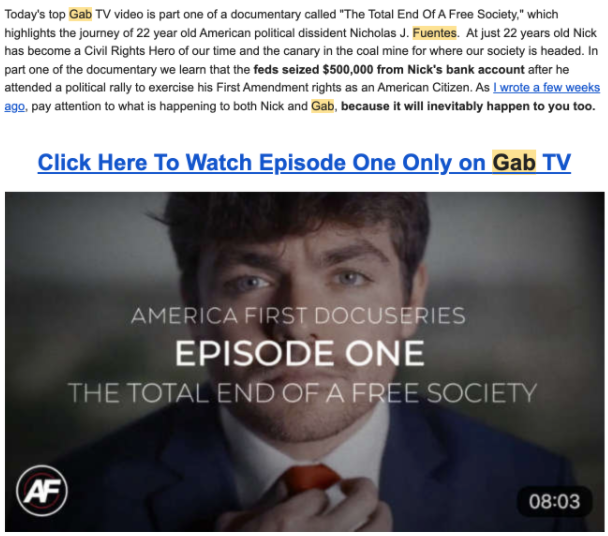 Citation From an email from Gab in August 2021

Torba’s embrace of Fuentes also fits his pattern of pushing antisemitism alongside his own brand of “Christian Nationalism.” In April 2021, Torba shared a video of Fuentes criticizing the American Jewish Congress for being critical of Gab and wrote that Fuentes “is waking Conservatives up and shifting the Overton Window in the right direction. It's long overdue.”

In July, he wrote that Fuentes “and the millions of young Christian men and women like him are the future. … America First Christian Nationalism is inevitable.”

And that same month Torba took his praise even further, calling Fuentes the “civil rights hero of our time” and writing a blog post claiming that “in an age where young, straight, White, Christian men who hold Biblical values are being treated as second class citizens for their political and religious beliefs, Nick Fuentes is a voice of reason.” 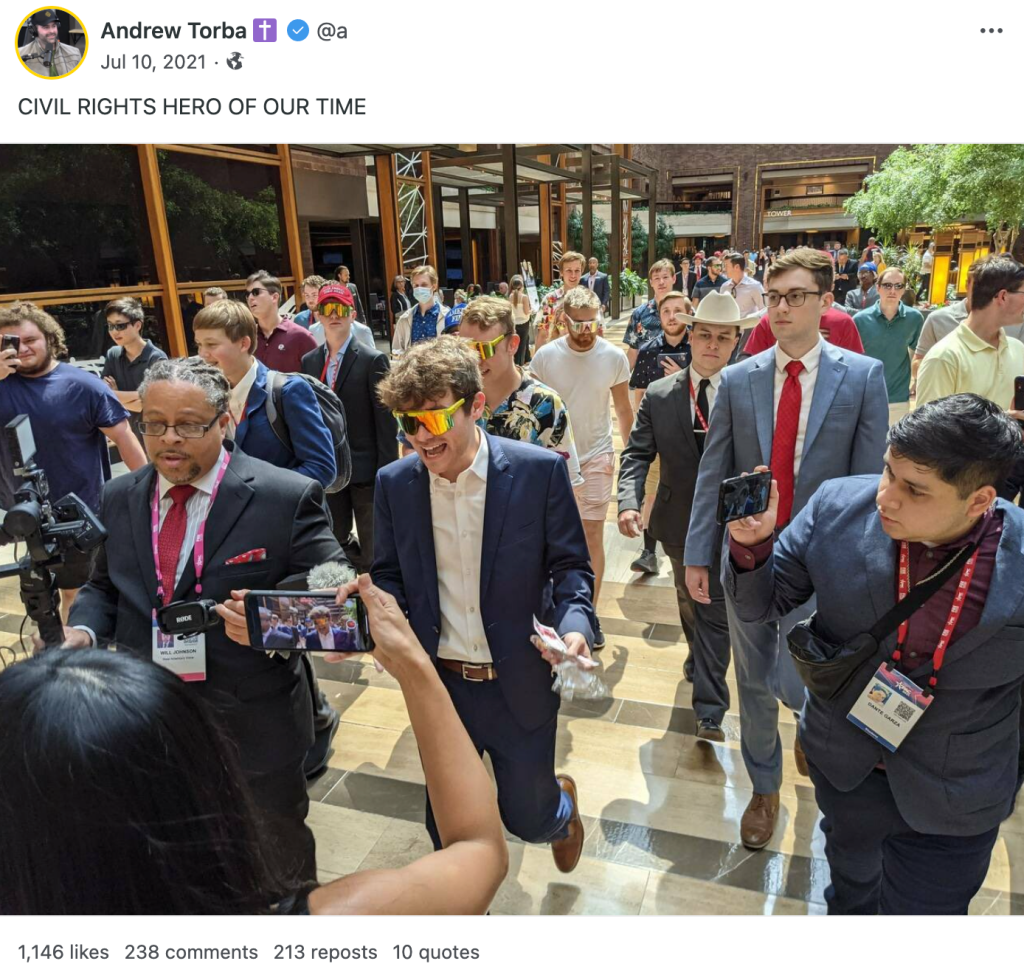 Torba also criticized those in conservative media who were critical of Fuentes, claiming that “they are not on our side” and that they were criticizing Fuentes “because what he says is TRUE.” Torba also defended Fuentes in response to criticism from The Daily Wire’s Ben Shapiro and promoted a quote from Fuentes that “denying Christ is far worse than denying the Holocaust, and Ben Shapiro and all the jews can take that to [the] bank.”

In addition to praising and defending Fuentes on Gab, Torba has also repeatedlysharedclips ofFuentes and America First. Media Matters found that Torba shared Fuentes and America First clips more than 20 times within just a four-month period alone in 2021, including a video titled “WAKE UP! ‘Holocaust RELIGION’ Is ANTITHETICAL To America First,” and a video of Fuentes saying the U.S. is a Christian nation and telling American Jews to move to Israel if they don’t like antisemitism, to which Torba wrote, “There are tens of millions of us who feel this way and we aren’t going away. 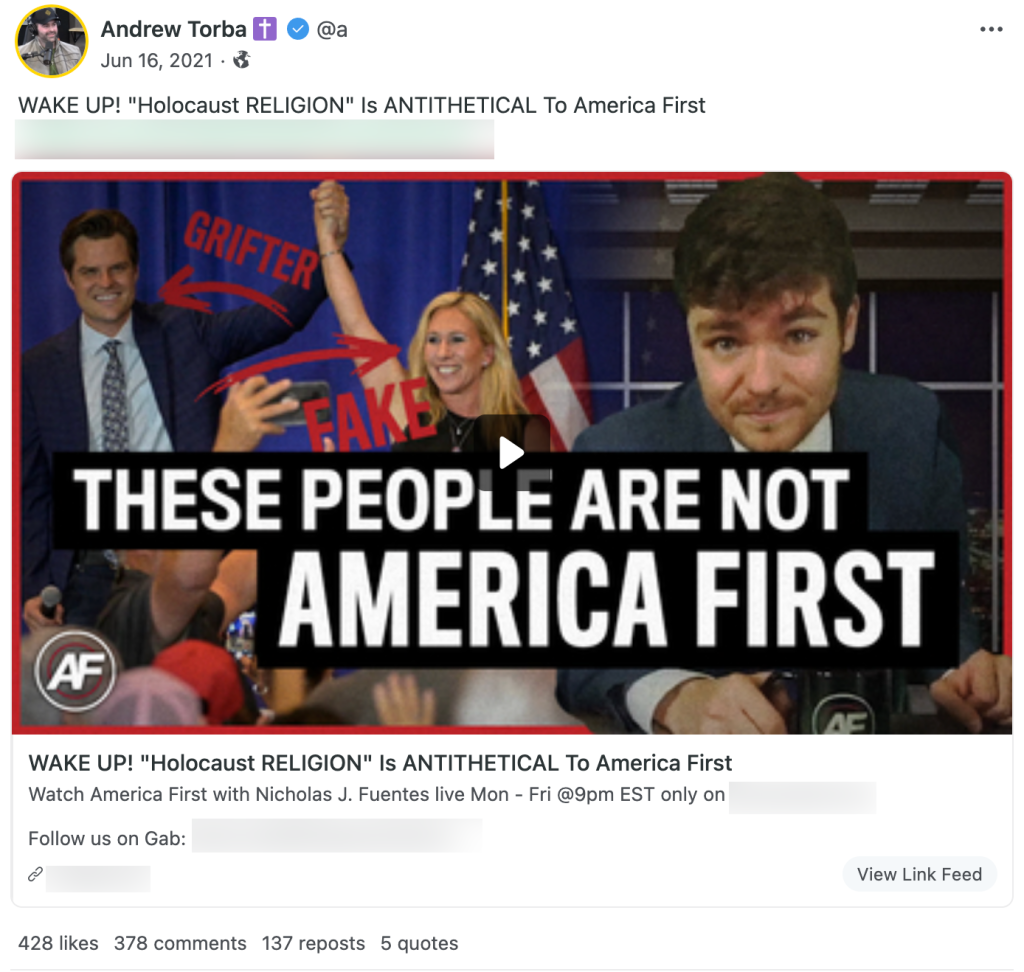 In the days leading up to and right around Torba’s sponsorship announcement of AFPAC, he also created a Gab account on Fuentes’ streaming platform, where he began doing livestreams and openly expressed hope for a “partnership” between both platforms.

Torba also used Fuentes’ streaming platform to defend the AFPAC announcement against criticism from Gab users, saying it was “unbecoming” and “leftist-type behavior” and that Fuentes’ attacks on Gab users were simply cases of him being a “provocateur” like Torba. He said that the conference was “the best possible thing for Gab to sponsor” because it would “give glory to Christ” and feature “a bunch of young people who are the future.”

Gab’s Twitter account has also praised Fuentes, writing that he and Gab “embody the true and relentless spirit of American excellence, ingenuity, grit, and defiance in the face of tyranny.”

Fuentes has reciprocated Torba’s praise, calling the Gab CEO a “21st century Founding Father” and adding, “It was people like him that created this country.”

On an episode of Fuentes’ show in January, the host said that Torba was a “total rock star and Gab is blowing up,” pointing to the growing number of Republican politicalfigures joining the platform as evidence. He later said that Torba’s involvement is “absolutely critical,” adding, “He’s going to be a very important figure. He is already, but his importance will grow because Gab is very important.” And on the day that Torba announced Gab’s sponsorship of AFPAC, Fuentes wrote: “I trust Gab because Gab is run by a faithful Christian. And not some Judeo-Christian either, a Christian.”

Fuentes has also repeatedlyanddirectlylaudedGab, which he joined in the days after the Capitol insurrection, writing that it is the “one true free speech platform in the entire world” and “an amazing platform” because “without it there would be nowhere else on the entire internet for us to go.”

From Your Site Articles
gab