Fox News host Jesse Watters encouraged an audience of young right-wing activists to “ambush” Dr. Anthony Fauci with a rhetorical “deadly” “kill shot” while describing a gotcha question they could ask Fauci based on a conspiracy theory about the origins of COVID-19.

Watters’ comments come as Fox News has led an unprecedented wave of attacks against a leading public health figure. Fox News personalities have attacked Fauci over 400 times just since February 22, according to a Media Matters analysis of Fox’s weekday programming. These attacks can often feature violent rhetoric, as Fox personalities have likened Fauci to historical dictators and Nazis, fearmongered about a “medical deep state,” suggested Fauci should be subject to a criminal investigation, and falsely accused him of creating the coronavirus.

While Watters might defend his exhortations ( his allies already are), he also really ought to know better from his own professional history. Over 10 years ago, when Watters was a producer for disgraced Fox News host Bill O’Reilly, the show engaged in a long pattern of incitement against George Tiller, a Kansas doctor who performed abortions. This included an instance of Watters staging an ambush interview of Tiller’s lawyer, and fellow O’Reilly producer Porter Barry performing a similar ambush interview on Tiller himself. Tiller was later murdered in 2009, while he was at his church.

In addition, the venue where Watters made this latest comment must be considered. He was speaking at the “AmericaFest” event organized by Turning Point USA. This is the organization founded and run by right-wing provocateur Charlie Kirk, who has run a relentless anti-vaccine campaign, including during his appearances on Fox News. Kirk’s events have previously seen incitements to political violence (including yesterday), and his organization was also linked to the January 6 insurrection.

Watters encouraged audience members to publicly confront Fauci, should he ever come to their college campuses, with the false claim that Fauci was responsible for the creation of COVID-19 in a Chinese lab. (The conspiracy theory has been promoted by multiple Fox News hosts including Maria Bartiromo, Steve Hilton, and Tucker Carlson.)


JESSE WATTERS (FOX NEWS HOST): You have the goods, you have the goods, because he's been able to dodge and weave on the ABC and NBC, no one's ever hit him in the face like this, not even [U.S. Sen.] Rand Paul has been able to get in his face, and point with the grant in his face. Then, he's in trouble.
Now you go in for the kill shot. The kill shot, with an ambush, deadly, because he doesn't see it coming. This is when you say, “Dr. Fauci, you funded risky research at a sloppy Chinese lab, the same lab that sprung this pandemic on the world. You know why people don't trust you, Don’t you?” Boom, he is dead, he is dead, he’s done.
Now how you do that, 30 seconds, that’s all you need, 30 seconds. Now, you get that footage to us, you get it to Fox, you get it to Human Events, you get it to Breitbart, you get it to Daily Caller, you get it to the Turning Point pipeline. Imagine Tucker Carlson teases out of the A-block, “Coming up, brave college student confronts Lord Fauci at dinner. Exclusive footage, right back.” Get us that — that's what we want. That changes the whole conversation of the country.
I’ve authorized it, just make sure it's legal.

Fauci responded on Tuesday morning’s edition of CNN’s New Day, calling out Fox News for the likelihood that it was “not going to do anything” about Watters.

JOHN BERMAN (CO-ANCHOR): On the subject of divisiveness, Dr. Fauci — I'm not going to play it because, frankly, I think it is dangerous. But Jesse Watters, who is a Fox News entertainer, was giving a speech to a conservative group where he talked about you and suggested to the crowd that they ambush you with what he said was some kind of rhetorical “kill shot.” That was his exact word. I'm wondering, you know, how much that concerns you when you hear language like that about you and your well-being?
DR. ANTHONY FAUCI (CHIEF MEDICAL ADVISER TO THE PRESIDENT): Well, John, that's horrible. I mean, that just is such a reflection of the craziness that goes on in society. The only thing that I have ever done throughout these two years is to encourage people to practice good public health practices, to get vaccinated, to be careful in public settings, to wear a mask. And for that, you have some guy out there saying that people should be giving me a kill shot, to ambush me? I mean, what kind of craziness is there in society these days? That's awful that he said that.
And he's going to go, very likely, unaccountable. I mean, whatever network he's on is not going to do anything for him. I mean, that's crazy. The guy should be fired on the spot.

About three weeks ago, Fox Nation host Lara Logan compared Fauci to the Nazi war criminal Dr. Josef Mengele. At the time, Fauci called the comparison “unconscionable” and an “insult to all of the people who suffered and died under the Nazi regime in the concentration camps.” Logan, meanwhile, tweeted further attacks at Fauci for his past research on AIDS drugs and amplified another user’s tweet attacking the Auschwitz Museum for having condemned her remarks.

Since then, Logan has apparently been absent from Fox’s on-air programming. But Fox has not taken any similar measures with Watters, at least not so far. Instead of holding Watters accountable, Fox has posted Watters’ speech on its own Fox Nation site and promoted a link to it on Twitter. 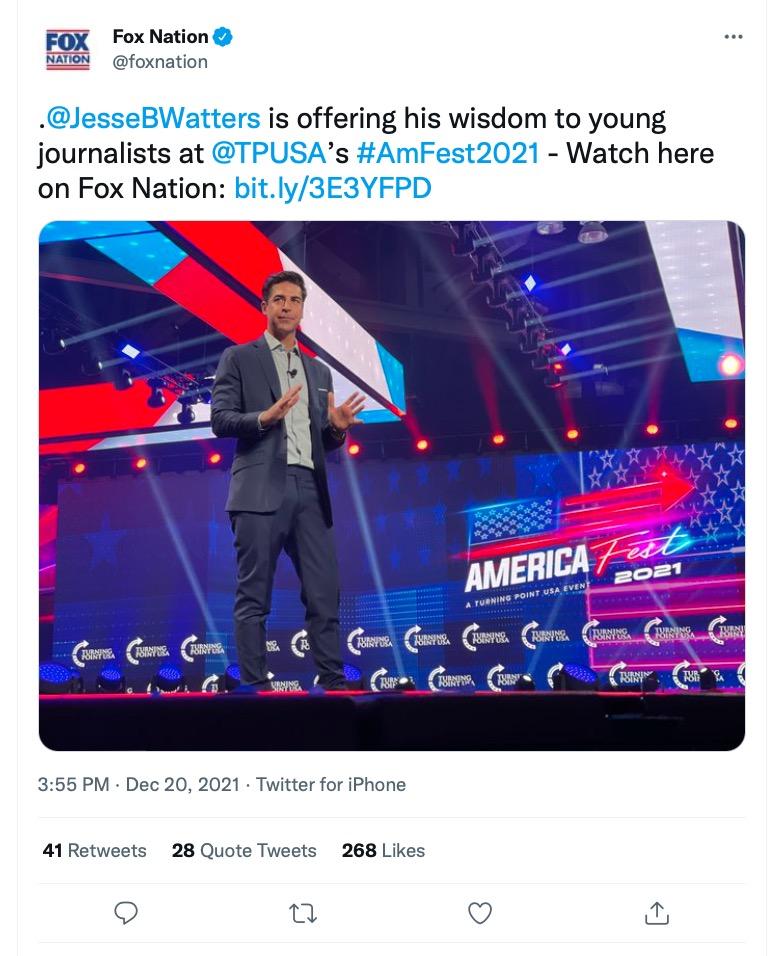 Article reprinted with permission from MediaMatters

From Your Site Articles
fox news