US soldier is Afghanistan.

Photo by The U.S. Army is licensed under CC BY 2.0

When the Taliban reclaimed Afghanistan last month, their victory was the culmination of two decades of failures by U.S. political, military, and diplomatic elites across four presidencies.

It also starkly revealed the failures of the U.S. press, whose relatively minimal coverage of the country in recent years had allowed those responsible for faltering U.S. policy to escape accountability. Conveniently for those leaders and pundits, the recent spike in context-free negative coverage of the Taliban takeover has now helped make President Joe Biden the scapegoat for ordering the withdrawal of U.S. forces.

Afghanistan was only treated as a major news story when U.S. forces invaded in 2001, when they evacuated last month, and to some extent during the Obama-era surge in troop levels. Over the last decade, even as events transpired that led inexorably to U.S. defeat -- the deaths of tens of thousands of Afghan soldiers and civilians to an ongoing civil war and terrorist strikes, the loss of the Afghan government's credibility amid a host of corruption scandals, a revived Taliban undeterred by U.S. airstrikes or the U.S.-trained Afghan military -- news coverage remained largely muted. As one Afghanistan specialist put it, "This is the least reported war since at least WWI."

To be clear, we know as much as we do about these events thanks to the essential coverage provided by American journalists and their Afghan colleagues. But their work was generally ignored by broadcast and cable news channels and rarely made the newspaper front pages. Without sustained media focus, it was relatively easy for the bipartisan foreign policy community to continue on its flawed course. Only in the frantic final days of the U.S. presence in the country -- when it was too late to change the outcome but just in time to assign blame -- did Afghanistan become a singular focus for major news outlets.

The New York Times, for example, ran 55 front-page stories about Afghanistan in August, according to a Media Matters review of the Nexis database. That figure is higher than in any single month other than October 2001 -- when the U.S. invaded the country -- and higher than in any full year since 2015. The Times averaged roughly three front-page stories about Afghanistan a month over the four years of the Trump administration; it has averaged nearly three such stories a day since August 16. 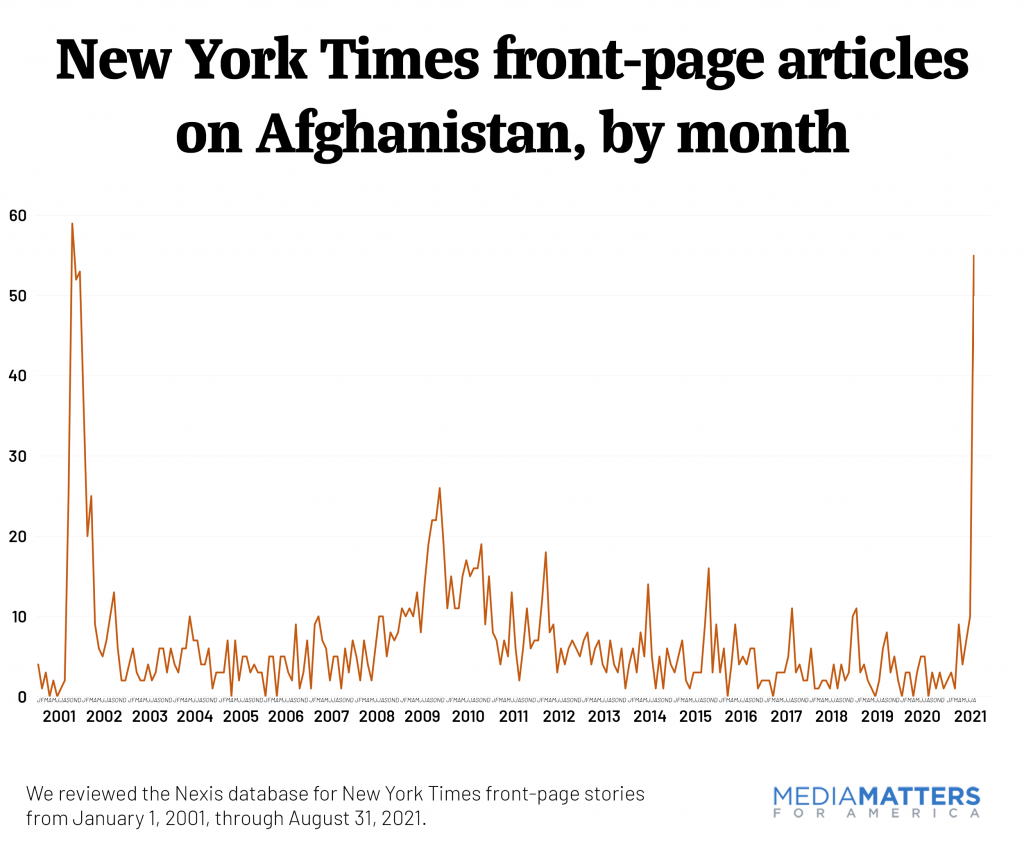 The same pattern played out on TV. Afghanistan coverage on CNN, MSNBC, and Fox News in August 2021 exceeded that of any full year since during the surge in 2010, according to the Stanford Cable TV News Analyzer. In fact, CNN and MSNBC spent more time covering Afghanistan last month than they did from 2017 to 2020 combined.

Coverage on the broadcast nightly news shows had also been sparse, according to data that researcher Andrew Tyndall provided to Responsible Statecraft: 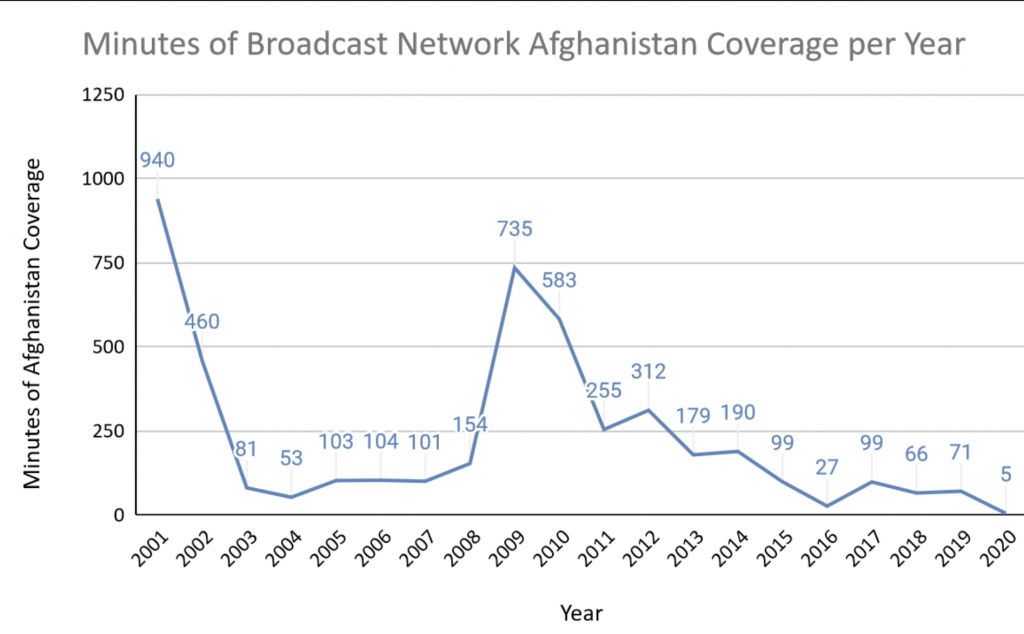 The Taliban's swift seizure of territory culminating with the capture of Kabul as the government evaporated and the military dissolved; the U.S. evacuation of more than 120,000 Americans and Afghan allies; and the terrorist attack that killed 13 U.S. service members and scores of Afghans are all major stories that dominated last month's news coverage.

But when major stories happened in Afghanistan in previous years, they did not break through to nearly the same extent. 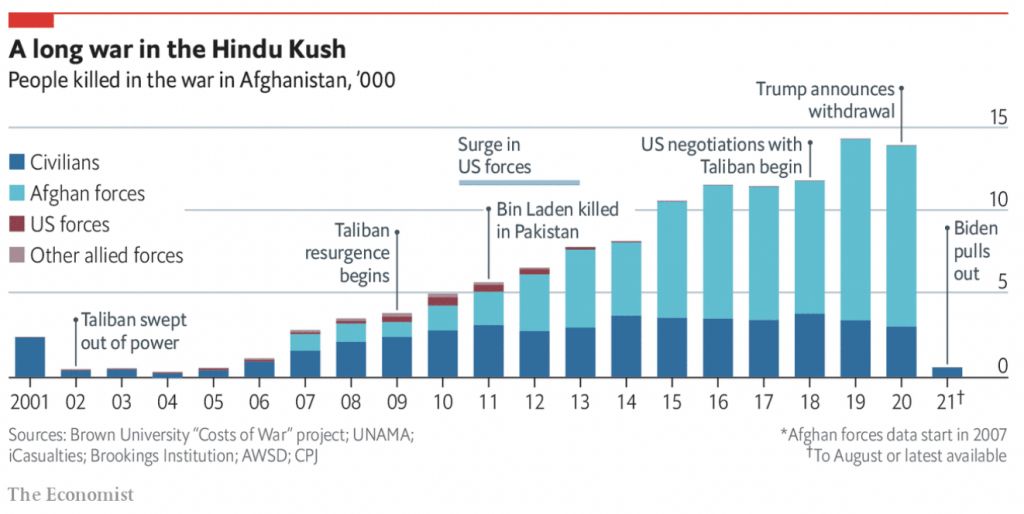 While U.S. combat fatalities waned in recent years, American service members continued to die in Afghanistan, and the ongoing civil war between the country's government and the Taliban remained deadly for Afghan forces and civilians alike. The discrepancy between those casualty figures may have made the war seem less pressing to Americans, but it is crucial to understand the context in which the Taliban swept across the country.

At the same time, Afghanistan's U.S.-backed government remained breathtakingly corrupt, destroying its legitimacy with the local public. Its U.S.-trained security forces engaged in rampant sexual abuse of children. Its capital was rocked by deadlyterrorist attacks. Despite all this, the U.S. financial support for the regime kept flowing, at an estimated total cost of more than $2 trillion. The Trump administration dramatically expanded airstrikes, resulting in a surge of civilian casualties.

These failures have been documented both inside the government and outside it. The office of John Sopko, the Special Inspector General of Afghanistan Reconstruction (SIGAR), investigated and documented a wide array of U.S. strategic errors and failed policies over the years. Most recently, Sopko concluded that "the U.S. government struggled to develop a coherent strategy, understand how long the reconstruction mission would take, ensure its projects were sustainable, staff the mission with trained professionals, account for the challenges posed by insecurity, tailor efforts to the Afghan context, and understand the impact of programs."

U.S. officials knew the Afghan effort was going poorly, even as they bragged of their successes to the American public. And it's true that some outlets tried to puncture that facade. The Washington Post reported in December 2018 on the Afghanistan Papers, documents generated as part of SIGAR's investigations which revealed "explicit and sustained efforts by the U.S. government to deliberately mislead the public." Sopko told the Post that the documents show "the American people have constantly been lied to."

That's a dramatic statement that should have triggered a rethinking of U.S. policy in Afghanistan. But as with so much of the great Afghanistan journalism of the era, the story did not significantly break through on TV news and become part of the broader media understanding of the war.

As the Taliban swept to power in the face of the U.S. withdrawal and Afghanistan became the central story for the press to an extent not seen since the 2001 invasion, another weakness came back into focus.

Americans needed crucial context about the failure of the U.S. mission given the relatively minimal reporting on Afghanistan in recent years. But as coverage of the country dramatically ramped up over the last month, outlets instead frequently prioritized the views of Washington-based journalists and pundits who presided over the quagmire in the first place.

Over the last month, news outlets all too often turned to the very people responsible for U.S. policy toward Afghanistan. These architects of failure were regular guests on TV, prioritized for quotes in print articles, and had their views splashed across the op-ed pages of major newspapers. By presenting the end of the war through the same perspectives which guided their coverage for two decades, news outlets took them off the hook for the calamities they helped bring about -- and allowed them to pass the blame to Biden.

The press is in a dangerous position when its interests align with the people it covers. And in this case, it shares with generations of U.S. politicians, diplomats, and military leaders a desire to escape nagging questions of its conduct over the longest war in U.S. history.

Media Matters searched articles in the Nexis database for The New York Times for any variation of the term "Afghanistan" in the headline or lead paragraph of any article in the paper's A section on page 1 from January 1, 2001, through August 31, 2021.

From Your Site Articles
Related Articles Around the Web
afghan war