Robert Regan, a Republican-backed nominee for a Michigan state House seat, shared a meme from a pro-Nazi website claiming that feminism “is a Jewish program to degrade and subjugate white men.” He also used Facebook to share a piece from a fringe site claiming that Jewish people, led by the Rothschild family, were responsible for 9/11; assassinated Presidents Lincoln and Kennedy; and control the banks and media, among other purported misdeeds.

Regan, an author and businessperson, recently won a Republican primary special election to fill the District 74 seat in the Michigan House of Representatives. Regan has made news because he has falsely claimed that the 2020 election was stolen and said he wants to overturn the results. He has also called Russia’s invasion of Ukraine a “fake war just like the fake pandemic.”

The Michigan Republican Party congratulated Regan and two other primary winners, writing: “A HUGE congratulations to Mike Harris, Terence Mekoski and Robert Regan, the winners of last night’s Special Primary Election. We look forward to the Republican leadership you will bring to your districts and the impact you will have on our state.”

On May 18, 2021, Regan shared a meme sourced to the defunct pro-Nazi website smoloko.com that claimed that feminism “is a Jewish program to degrade and subjugate white men.” Smoloko.com has featured numerous memes celebrating Adolf Hitler (“Happy Birthday to the man who nearly smashed the Jewish World Order”), denying the Holocaust (“their holocaust hoax”), and attacking Jewish people (“World War II was used by subversive Jewish interests to control the societies our ancestors created through fraud”). The Twitter account Michigan Tea previously documented that meme. 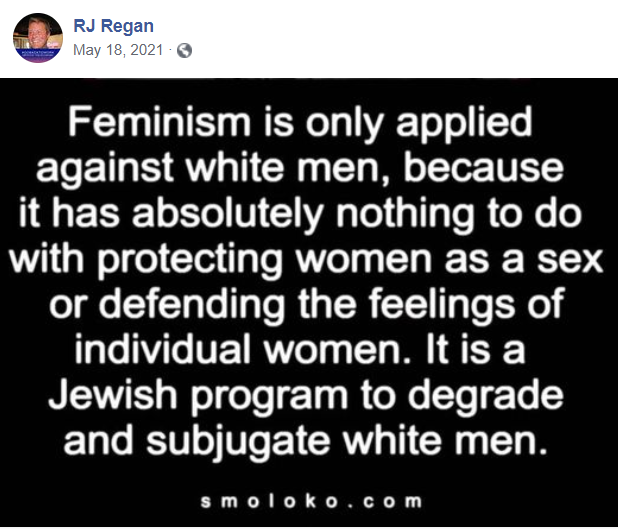 Regan also wrote a January 26, 2021, Facebook post that promoted a long piece on the fringe right-wing website American Digital News accusing Jewish people, led by the Rothschild family, of causing global problems for their financial benefit. He commented: “Long but, interesting thread. I report, you decide” and used a thinking emoji.

A longstanding anti-Semitic conspiracy theory posits that a cabal of Jews led by members of the Rothschild banking family have been manipulating currency and exerting influence on regional and national events since the early 19th century for the purposes of personal enrichment and/or world domination. Anti-Semitic conspiracy theorists claim that the Rothschilds interfered with the American Revolution, financed Nazism and/or the Bolshevik Revolution, perpetrated the 9/11 attacks, and created the state of Israel. They also allege that the Rothschilds are some of the chief architects of an impending “New World Order” which will abolish nationalities and enslave humanity.

In one notable instance, Rep. Marjorie Taylor Greene (R-GA) used Facebook to push an antisemitic conspiracy theory about the Rothschild family and a supposed space laser.

The Regan-promoted piece contained numerous anti-Semitic claims in a timeline format, including but not limited to:

On March 9, 2021, Regan also used Facebook to agree with a meme by QAnon influencer Jordan Sather which stated: “What is the real virus plaguing the world? (((Them))).” The Anti-Defamation League explained that “multiple parentheses—or the ‘echo,’ as it is sometimes referred to—is a typographical practice used by some anti-Semites on-line. … When used around a term or phrase—such as (((banker)))—the intent is generally that the word ‘Jewish’ be placed in front of the term or phrase, or simply that the term or phrase is actually synonymous with Jews.” 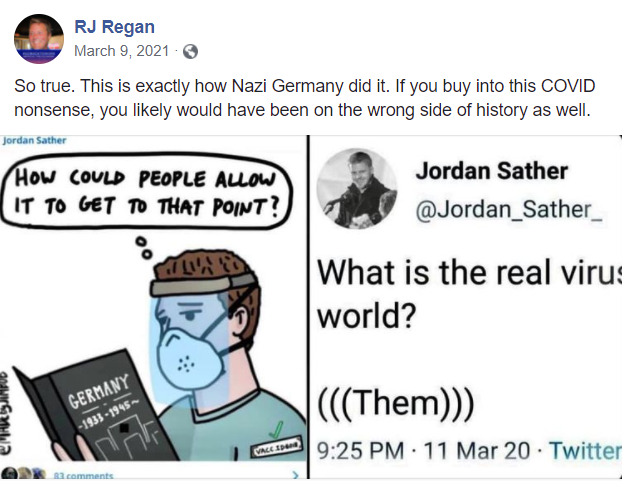 From Your Site Articles
robert regan