With President Donald Trump's reelection hopes seemingly fading, Fox News star Tucker Carlson made an 11th hour push on Tuesday night to try to will him to victory. He devoted his entire program to an interview with Tony Bobulinski, a former business partner of Hunter Biden, in the latest dubious salvo of an extensive campaign by Rupert and Lachlan Murdoch' media outlets to tarnish Democratic presidential nominee Joe Biden via his son's business interests.

Carlson's interview had been heavily touted by Trump's allies, and the Fox host presented it on Tuesday as a devastating bombshell for Joe Biden. The reality is more mundane.

In 2017, Bobulinski was part of a group that included Hunter Biden and Joe Biden's brother James Biden in an effort to form an investment partnership with the Chinese oil company CEFC China Energy Co. The venture reportedly "never received proposed funds from the Chinese company or completed any deals"; corporate records "show no role for Joe Biden"; he has denied that he was involved in the business or profited from it; and he was neither in public office nor running for one at the time. (Notably, the talks occurred as Trump's son-in-law and daughter were working at senior levels in the White House while their companies were seeking to lure Chinese investments and receiving favors from its government, just two of the Trump family's myriad conflicts of interest.)

Bobulinski's big revelation on Tuesday was that he had met with Joe Biden twice in 2017, once for a one-hour meeting and once in passing. But by Bobulinski's own admission, their conversation included no discussion of the details of the proposed venture. Instead, according to Bobulinski, "Joe asked me to talk about my background and my family" and "walked through sort of his family." The rest that he had to offer was speculation spun through Carlson's bullshit factory.

Rupert and Lachlan Murdoch's media empire fused with Donald Trump's administration over the past four years, as Fox News commentators joined his administration or influenced it from their cable news posts. That relationship benefited the Murdochs' business interests and boosted Fox's ratings to record highs. But the president their employees supported and counseled remains deeply unpopular, and his reelection hopes are fading.

In hopes of preserving this unprecedented relationship with the White House, the Murdochs' news outlets have orchestrated a massive smear campaign in the final weeks before Election Day. That effort, led by the New York Post and amplified by Fox's megaphone, has sought to bury Joe Biden with a blizzard of dubious and bad-faith allegations related to his son Hunter Biden's business interests.

It began as a rerun. In the spring of 2019, Fox supercharged Trump lawyer Rudy Giuliani's Ukrainian disinformation campaign, which revolved around the conspiracy theory that as vice president, Joe Biden corruptly sought the removal of a Ukrainian prosecutor in order to boost his son's business interests in that country. Giuliani created a parallel policy track to dig up Biden dirt in Ukraine, and the president abused his power to pressure Ukraine's president to open a Biden investigation, eventually triggering his impeachment. Fox was central to every aspect of the story, including by helping Trump evade accountability in his trial before the U.S. Senate.

Eighteen months later, in the closing days of an election Trump was poised to lose, the same players revived the same false story that Joe Biden had forced out the Ukrainian prosecutor to help his son. But this time the tale involved a shiny object -- emails and text messages purportedly obtained from Hunter Biden's laptop, which Giuliani said he had received from the owner of a Delaware computer repair shop after Hunter Biden had dropped off the supposedly incriminating evidence and then never returned for it.

The more journalistically inclined members of Murdoch's media empire knew the story was incredibly sketchy. Trump's minions first reportedly tried to launder the story through a "straight-shooting" reporter at Murdoch's The Wall Street Journal. As the days went by without the story being published, Giuliani got involved.

By the Trump lawyer's own admission, his priority was finding an outlet that would run with the story and wouldn't "try to contradict" his dubious narrative with basic fact-checking. But the "news division" at Murdoch's Fox News, reportedly the first outlet he approached with the story, passed on it because its reporters were unable to sufficiently verify the document tranche. So Giuliani then moved on to Murdoch's New York Post.

On October 14, the Post ran its first front-page story on the Giuliani-sourced documents. The story was published under pressure from the tabloid's pro-Trump editors -- even as Post reporters privately refused to put their names on the story and publicly denounced it. "It sucks to, like, work for, like, a propaganda outlet," one of them told New York magazine.

The Post's reporters and opinion writers combined to produce 23 pieces published under the paper's "Hunter Biden" tag that day alone, and have added 90 more in the weeks since, detailing new allegations and purported revelationsfrom the Giuliani-provided documents, coveringRepublicanresponses to the story, and denouncing social media companies and newsoutlets for treating it with skepticism.

One outlet that did not handle the story skeptically was Fox, the most powerful propaganda outlet in the Murdoch portfolio. Its journalists had already passed on the story, and its "Brain Room" had previously identified Giuliani, the story's purveyor, as a source of "disinformation" on the Bidens and Ukraine. But the network's "unmasking" conspiracy theory had just fallen apart, and its right-wing commentators and the reporters who provide them with fodder needed some other purported scandal to talk about. And so Fox relentlessly obsessed over the New York Post's dubious revelations, running nearly 25 and a half hours of coverage across 420 separate segments over the next nine days alone.

Amid their furious and frothy discussions, the network's commentators called for federal investigations of the Bidens, pushed for the firing of FBI Director Christopher Wray for not publicly announcing one, and endlessly berated the media for not providing the same all-consuming and credulous coverage. 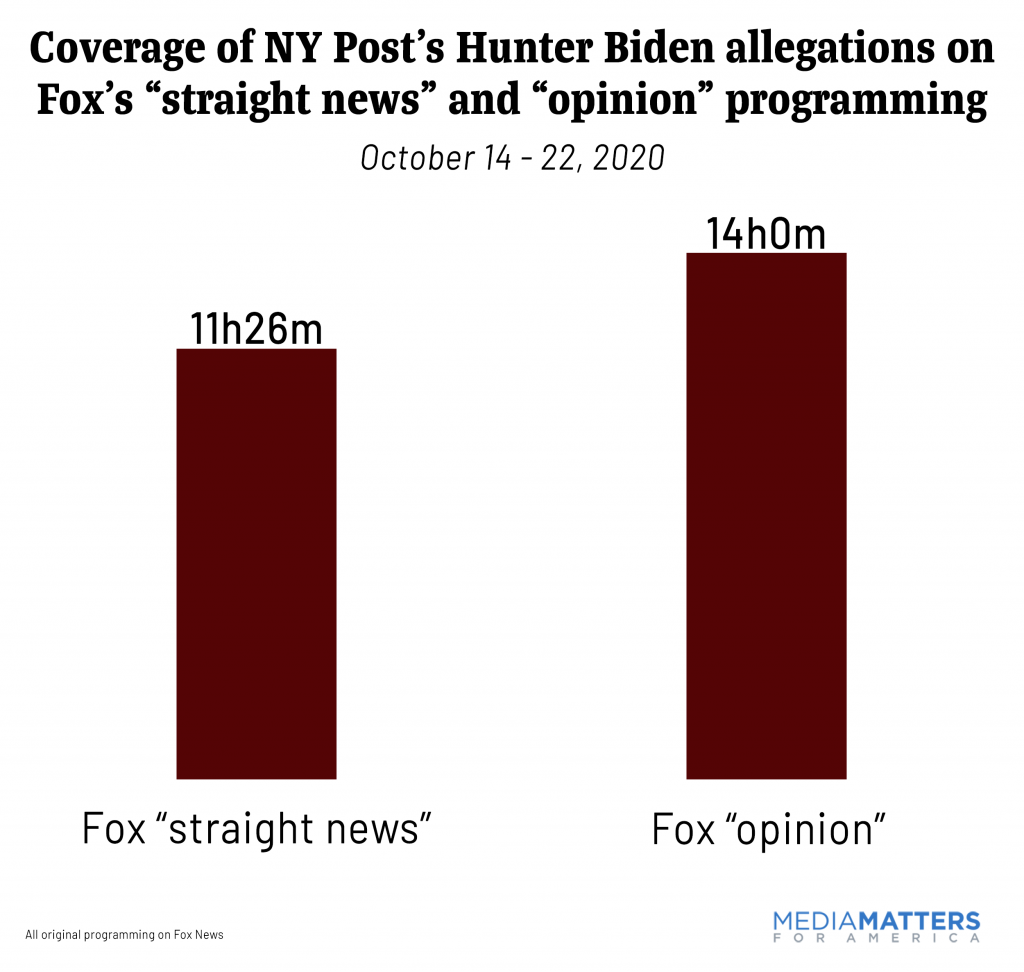 Bobulinski's story emerged last week, after his allegation was first reported by Trump favorite Michael Goodwin in a Post column claiming the "Hunter biz partner" had revealed "Joe Biden's push to make millions from China." The story was touted by the Trump campaign, Fox hosts like Carlson, and the editorial board of Murdoch's Wall Street Journal. But it was shot down by reporters at Fox, the Journal, and The New York Times, who reviewed Bobulinski's documentation and concluded that there was no evidence Joe Biden had been involved with or profited from the deal.

But those debunkings haven't kept Fox employees -- including on the network's "news side" -- from trying to turn Bobulinski's allegations into a scandal for Joe Biden's campaign. That's the context for Carlson devoting his entire broadcast, a week before the election, to a Bobulinski interview that the network's commentators have been desperatelyflogging ever since.

It is fitting that Carlson is the vehicle for this final salvo. Perhaps more than anyone else, he represents the merger between the Murdoch and Trump interests, and the deceit that serves as a key characteristic of each. He is the biggest star of the Murdochs' most important company, enjoying a close relationship with the moguls who have backed him at every turn. He is the member of the Fox News Cabinet that Trump listens to the most, guiding his administration's policies and his campaign's message while claiming that the president's reelection is necessary to preserve civilization. And his network has successfully argued in court that no "reasonable viewer" believes what he tells them.

There's a certain macabre irony in the timing of this last-ditch effort to generate an "October surprise" for Trump. It first began bearing fruit at around the same time coronavirus cases spiked in the United States, and as The Daily Beast reported that Rupert Murdoch is "disgusted" by Trump's failed handling of the pandemic, which has been fueled by the Fox commentators like Carlson, whose advice the president prefers to that of public health experts.

Murdoch may think Trump's incompetent pandemic response is causing a catastrophic body count, but his most powerful employees are still doing everything possible to keep him in office.

From Your Site Articles
Related Articles Around the Web
rupert murdoch