Patreon finally banned creators advancing QAnon misinformation from its platform. Now, those same creators are using SubscribeStar, PayPal, and GoFundMe to monetize the violence-linked conspiracy theory, despite the fact that their content appears to violate these platforms' terms of use as well.

The QAnon conspiracy theory is centered around claims that President Donald Trump is secretly fighting against members of the "deep state" and "pedophiles," who will supposedly be rounded up and executed soon. These threats and calls for violence targeting Trump's political opponents are often wildly anti-Semitic. This unfounded conspiracy theory promoting imminent violence against the president's enemies has been classified by the FBI as a domestic terror threat and has been directly linked to multiple killings, a kidnapping, and even terrorism.

It is not enough for one platform to ban these creators. Even after Patreon's crackdown on the conspiracy theory, at least one major QAnon creator boasted that the company was "nice enough to give me the email list for my Patreon," enabling the conspiracy theorist to reach out to former followers for support in organizing the jump to new payment platforms.

These companies must enforce their own rules and actively condemn QAnon misinformation and hate speech on their platforms, or face being complicit in further enabling the spread of the dangerous conspiracy theory. These companies' continued inaction -- even as a number of major media platforms have begun to publicly condemn the conspiracy theory and crackdown on QAnon content and accounts -- make clear their prioritization of profits over curbing a domestic terrorist threat.

SubscribeStar, PayPal, and GoFundMe -- it's your turn to enforce your own rules and denounce QAnon.

Similar to Patreon, SubscribeStar gives creators a platform to run monthly content subscription services. And, again like Patreon, creators have the option to charge followers a range of different tiered membership fees, and the company collects payment processing fees from each transaction. This means SubscribeStar is now profiting from QAnon, much like Patreon was prior to taking action against QAnon creators.

SubscribeStar users are prohibited from using the site "to harass, abuse, insult, harm, defame, slander, disparage, intimidate, or discriminate based on gender, sexual orientation, religion, ethnicity, race, age, national origin, or disability; (f) to submit false or misleading information." The platform also promises to remove content and possibly even accounts that display "hatred toward any social or ethnic group" and "calls for violence or oppression," and SubscribeStar similarly says they will terminate accounts with a "known affiliation with violent or dangerous groups (e.g. organized criminal groups, terrorist or cyber-terrorist organizations, illegal militias, mercenary organizations, violent hate groups, etc)," regardless of "the declared purpose of the corresponding profile." SubscribeStar also warns accounts can be terminated for harassment or abusive behaviors on the platform "or outside with the use of the platform and its parts."

With this in mind, the QAnon conspiracy theory seemingly violates multiple aspects of SubscribeStar's terms of service. Yet, the platform is now being flooded with QAnon creators who have been banned from multiple platforms because of the conspiracy theory's consistent hate speech, connection to violence, and mass misinformation campaigns. 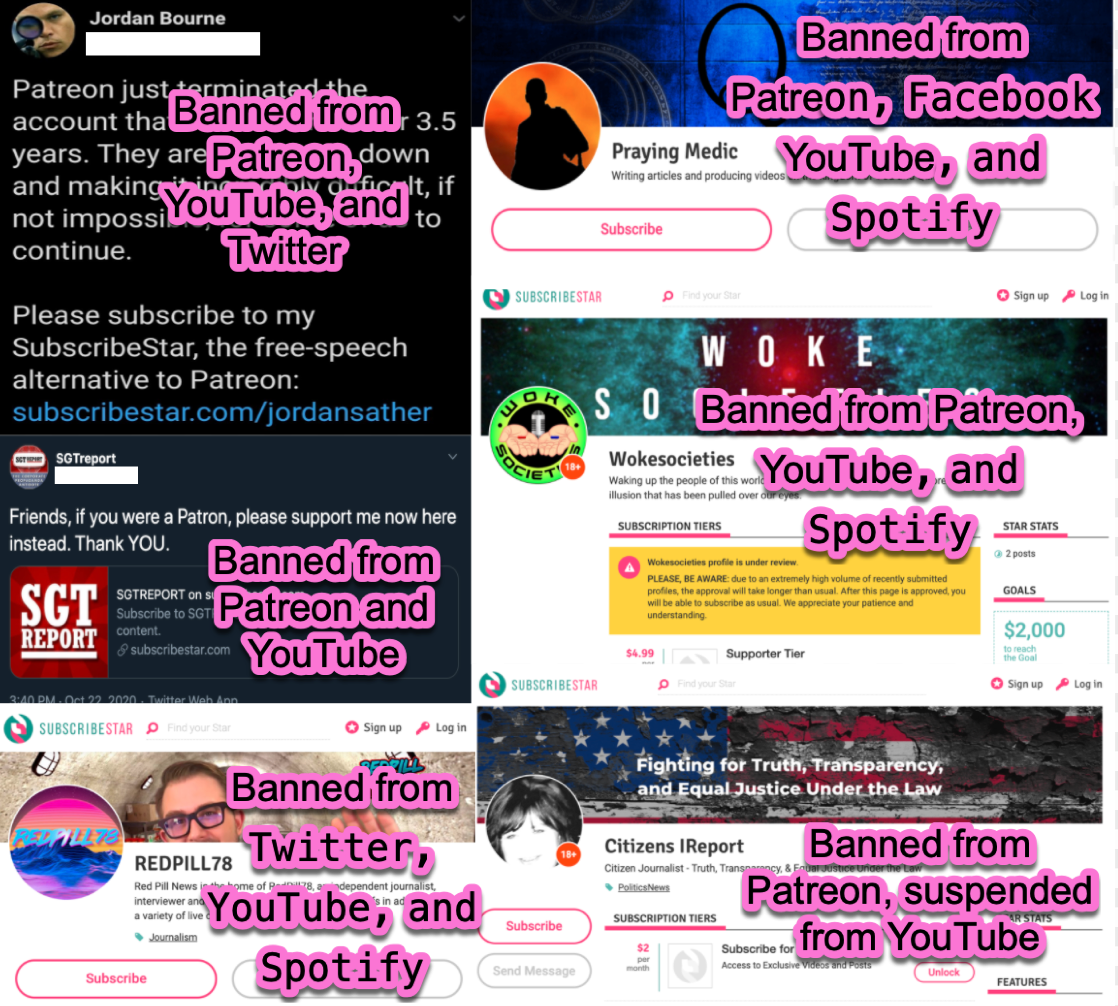 According to PayPal's terms of service, the company not only prohibits users from acting in "a manner that is defamatory, … threatening or harassing," and it also bans providing "false, inaccurate or misleading information." The company has also cracked down on white supremacist-linked accounts following past incidents of violence, saying: "The online payments processor said it works to make sure its services aren't used to accept payments or donations that promote hate, violence or racial intolerance."

Major QAnon creators Praying Medic and Truth and Art TV both claim to be banned from PayPal, but other QAnon creators are still permitted to use the platform and continue monetizing the conspiracy theory, begging their followers to support their dangerous misinformation through money transfers facilitated by the company. Despite the fact that they seemingly violate PayPal's terms of service, the company has yet to take any action against QAnon influencers using the platform to profit from the inherently violent conspiracy theory.

Even worse, the company takes a cut of every transaction processed to QAnon creators on its platform, meaning PayPal is directly profiting from promotion of the QAnon conspiracy theory. 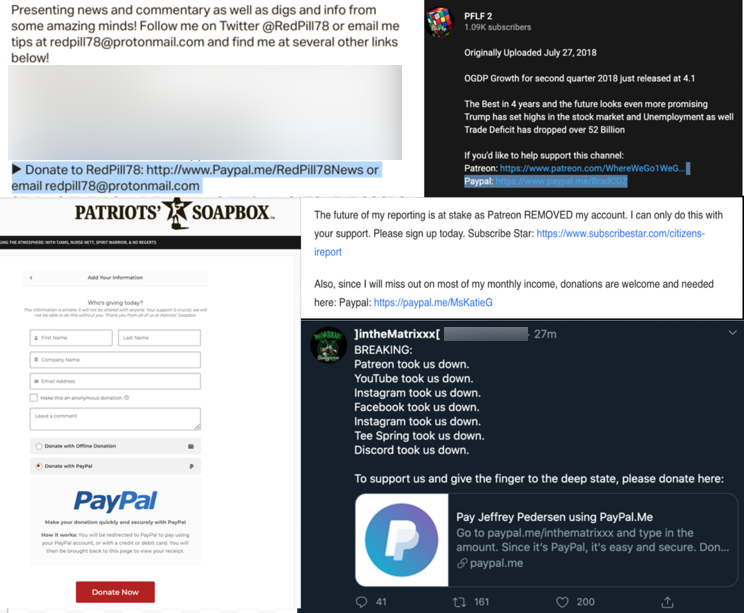 The QAnon conspiracy theory also seems to violate GoFundMe's terms of use.

The company claims that it prohibits "user content or reflecting behavior ... in support of hate, violence, harassment, bullying, discrimination, terrorism, or intolerance of any kind relating to race, ethnicity, national origin, religious affiliation, sexual orientation, sex, gender, gender identity, gender expression, serious disabilities or diseases." GoFundMe further notes that it can "refuse, condition, or suspend any Donations or other transactions that we believe in our sole discretion may violate the Terms of Service" or pose harm to others.

The DailyDot reported in September that followers of the conspiracy theory are utilizing this platform to raise huge amounts of money -- often claiming to cover QAnon followers' medical bills. In other cases, the platform is used to support QAnon followers who have received backlash for their connection to the conspiracy theory, including "an Arizona adjunct professor who was fired for showing the QAnon video 'The Plan to Save the World' to his class" and "became a celebrity in the Q movement, who saw him as a victim of the deep state's desperate need to keep the young people of Mesa Community College from learning what was really going on in their government and business."

GoFundMe's lack of action to stop the promotion of the destructive conspiracy theory on its platform is especially concerning as QAnon creators who have been kicked off other platforms move to using it as a more regular method for raising funds. An example of this is a new GoFundMe campaign created after QAnon-affiliated YouTube channels were removed from the platform because of the conspiracy theory's close link with violence, harassment, and misinformation.

One fundraiser titled "Stop Big Tech Election Interference" claims "YouTube has now become a direct threat to the United States of America and the Republic for which it stands" by cracking down on QAnon content being shared on the video platform. This GoFundMe page has already raised over $75,000 in four days even though Zach Vorhies, the fundraiser's organizer, is himself a major QAnon influencer and anti-vaxxer who has also worked to spread coronavirus misinformation through the discredited Plandemic conspiracy theory video.

"DONATE NOW to sue Google! STOP THE ELECTION COUP!" the post reads, with an image below including prominent conspiracy theory channels that have banned from YouTube. 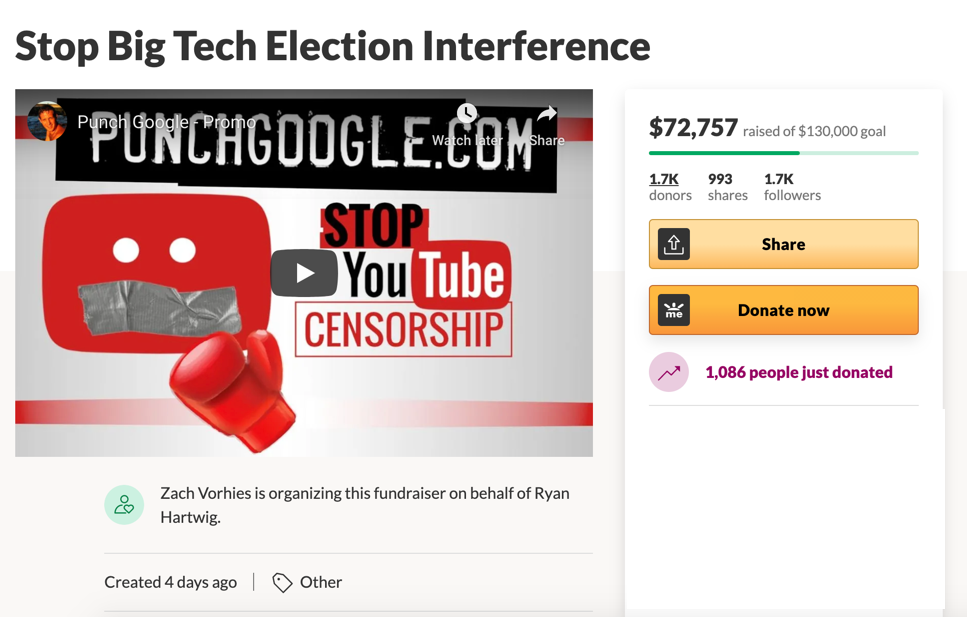 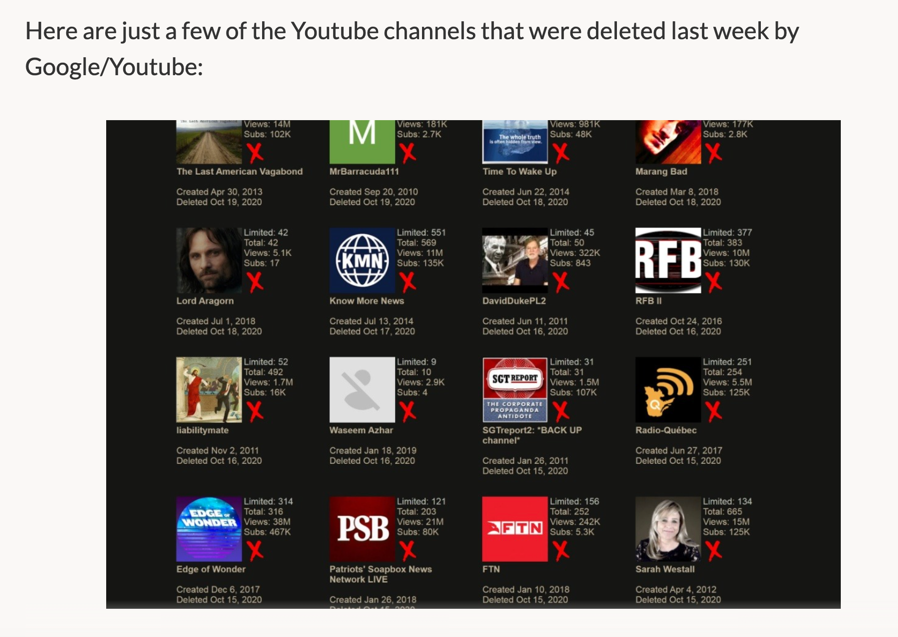 This example is not an isolated incident. Simply searching on the platform for "QAnon" or the conspiracy theory slogan "WWG1WGA," short for "Where We Go One, We Go All," yields a number of fundraisers directed toward followers of QAnon.