A new YouGov/Economist poll found that among registered Republicans and Trump voters, more than a third now hold a “favorable” view of Russian President Vladimir Putin. Though a majority still view Putin negatively, right-wing media — which spent years holding Putin up as a “better leader” than President Barack Obama — set the stage for Republican opinions to shift in the autocrat’s favor, leading to a nearly 50-point swing in support from conservatives in just over two years. And after the United States intelligence community publicly disclosed that its members believe Russia interfered in the 2016 election, many right-wing media figures doubled down on their support for Putin and are downplaying Russia’s involvement in the election.

Putin is an authoritarian “strongman” who has cracked down in Russia on freedom of speech and freedom of the press, signed into law draconian anti-gay legislation, and invaded and annexed the Crimean Peninsula, part of Ukraine. Nevertheless, for years, right-wing media have praised Vladimir Putin as a great leader, comparing him favorably against Obama.

Fox figures have consistently lauded the Russian autocrat as “a real he-man” and have claimed that Putin has “come to the diplomatic rescue” of President Obama. One Fox host even went so far as to proclaim that she would like Putin to be president of the United States “for 48 hours,” so he could fight ISIS. In 2014, conservative commentator Pat Buchanan suggested that Putin is “one of us” and applauded him for “planting Russia’s flag firmly on the side of traditional Christianity” with his policies against reproductive rights and LGBTQ rights — evidence, Buchanan suggested, that God is on Putin’s side in his clash with the West. Even conservative talk radio host Rush Limbaugh once admitted that Putin was “saying things I agree with” when the Russian president announced that he “opposed the adoption of Russian orphans by lesbian, gay, bisexual, transgender foreign couples.”

Primed by right-wing media, Trump voters now hold a more positive view of Putin and Russia. Since July 2014, Republican voters’ opinions overall of Putin have improved by 56 points, and in 2016 they voted for a candidate in Trump who is openly sympathetic to the autocrat and even invited his government to hack personal emails from Trump’s Democratic rival, Hillary Clinton. According to the poll, 35 percent of Trump voters and 37 percent of registered Republicans now hold a “favorable” view of Putin. 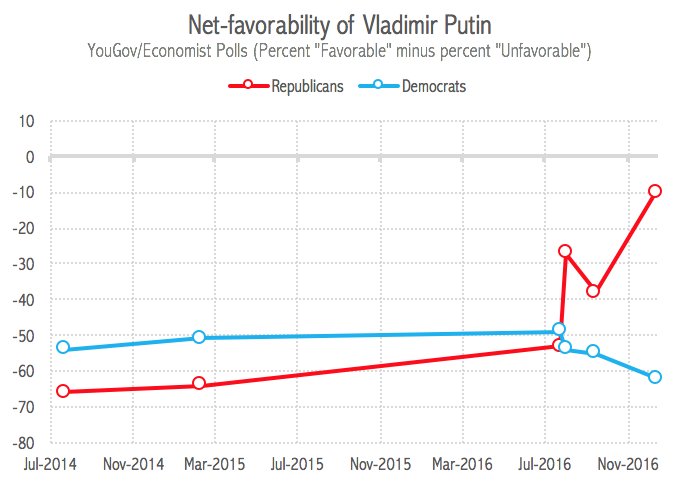 Now, even though the U.S. intelligence community has stated that its members are “confident that the Russian Government directed the recent compromises of e-mails from US persons and institutions, including from US political organizations,” some right-wing media are siding with Putin and downplaying the severity of the hacks. Security experts have characterized the Russian interference in the 2016 election as “Watergate 2.0” and “a concern to all those who share democratic values,” but the president-elect, who has consistently been enabled by those same conservative media figures, insists the claims of Russian interference are “just another excuse” and that he does not “believe it.” It seems, that right-wing media will follow Trump’s lead and continue to use Putin’s personality to advance partisan goals over the national security of the United States.

Why I’m Not (Very) Worried About Inflation

For a long time, inflation has been the phantom of the American economy: often expected but never seen. But the latest Consumer Price Index, which showed that prices rose by five percent from May of last year to May of this year, raises fears that it is breaking down the front door and taking over the guest room.

The price jump was the biggest one-month increase since 2008. It appears to support the warning of former Treasury Secretary Larry Summers, who wrote in February that President Joe Biden's budget binge could "set off inflationary pressures of a kind we have not seen in a generation." Senate Republican leader Mitch McConnell charged last month that the administration has already produced "raging inflation."

Why I’m Not (Very) Worried About Inflation