No, thanks
Tag: us postal service

Now that Postmaster General Louis DeJoy has confirmed reports that he is under investigation by the FBI for alleged campaign finance violations, ordinary postal customers who have suffered under his regime may rightly wonder why he is still in office. That is an urgent question — and has been an urgent question ever since President Joe Biden's inauguration — but it is worth examining how DeJoy got the job, and how he abused a position of constitutional trust.

The FBI probe concerns an alleged "straw donor" scheme undertaken by DeJoy to illegally funnel over a million dollars in excess contributions to the Republican Party and Donald Trump's presidential campaign. It's an obvious form of trickery designed to evade federal limitations on individual donations by urging others to support a campaign or candidate and then reimbursing them under the table. Corporate executives with political ambitions like DeJoy have committed this particular felony over and over again — and if DeJoy is indicted and convicted, he won't be the first suit sent to prison for it.

During and after the 2016 election, DeJoy raised upwards of a million dollars each for the Trump campaign and the Republican National Committee. For that he was named one of the party's three deputy finance chairmen — along with Michael Cohen, then still Donald Trump's personal attorney, and venture capitalist Elliott Broidy.

By then, Broidy had already been convicted on public corruption and bribery charges, while Cohen would soon plead guilty to campaign finance crimes as well as bank fraud. DeJoy would complete a dubious trifecta.

Last fall, a Washington Post investigation found that DeJoy had used the straw donor technique for over a decade to raise his profile as a Republican fundraiser in North Carolina. Former employees of New Breed Logistics, the supply chain firm he founded and then sold, said they had been pressured to make donations and repaid with bonuses and other compensation. The pattern dated back to the Bush administration — and appeared to have won at least two ambassadorial appointments for DeJoy's wife, Aldona Wos.

Yet while DeJoy's appointment as postmaster general was obviously greased by his massive donations, his alleged violations of election law are not the worst aspect of his regime. Even more troubling are major conflicts of interest that he has failed to resolve — and that some experts have described as potentially criminal.

When DeJoy sold New Breed to XPO Logistics, he held onto large amounts of stock and options in the merged company — which is a U.S. Postal Service contractor and might well profit from decisions made by him as postmaster. Policies promoted by DeJoy to diminish and even destroy postal delivery last year became controversial because of their effect on mail balloting — which his patron Trump blatantly sought to impede for partisan gain. But DeJoy is suspected of devising policies destructive to the Postal Service for his own self-serving purposes, too.

DeJoy and his family have invested tens of millions of dollars in companies, including XPO, that either contract with USPS, compete directly with USPS or both. Their investments in those competing firms, such as United Parcel Service, Forward Air and JB Hunt Trucking, are estimated between $30 million and $76 million, according to their own financial disclosures. Holding those interests in competing companies while serving in government is a serious violation of the law.

As Walter Shaub, former director of the Office of Government Ethics, said last year, "the idea that you can be a Postmaster General and hold tens of millions in stocks in a postal service contractor is pretty shocking." Except that the behavior of Trump, his family, his treasury secretary and many other conflicted employees lowered ethical expectations below zero.

Incredibly, DeJoy has only pretended to shed those conflicts since they were exposed last summer — by "divesting" his XPO holdings to his adult children. He continues to represent a holdover of the corrupt administration that voters ousted in 2020. And his plans to wreck the U.S. Postal Service remain a grave danger to an agency founded in Constitutional authority.

Biden could take action to have the Postal Service Board of Governors remove DeJoy from the board, which would mean he could no longer serve as postmaster general by law. Americans who depend on the mail for their livelihoods, medications and so much more need reform now. They can't wait until the last crooked Trump appointee is taken away in handcuffs.

Election experts and other critics of voter suppression responded with alarm Tuesday after the United States Postal Service failed to meet a court-ordered afternoon deadline to conduct sweeps at mail processing facilities to "ensure that no ballots have been held up and that any identified ballots are immediately sent out for delivery."

Earlier Tuesday, U.S. District Judge Emmet Sullivan of the District of Columbia had ordered the sweeps between 12:30 pm and 3:00 pm ET, and set a 4:30 pm ET deadline for facilities to file a status update. John Kruzel, a reporter at The Hill, tweeted Tuesday afternoon that the USPS failed to comply, in spite of saying this week that about 300,000 ballots had entered the mail sorting system but lacked a delivery scan.

A federal judge, U.S. District Judge Emmet Sullivan, has ordered the United States Postal Service to check its facilities for any unsent ballots and send them immediately.

Under Sullivan's order, postal workers must inspect their facilities between 12:30 p.m. and 3:30 p.m. on Election Day — and if they find any ballots that haven't been delivered, make sure they go out right away and arrive at their destination before the polls close.Sullivan also ordered the Postal Service to give his court an update on their sweeps.

Under Trump's watch, Postmaster General Louis DeJoy has been blamed for making changes that have slowed down mail delivery — which, Democrats have been warning, could cause ballots to arrive too late to be counted. Some Democratic activists have, for weeks, been urging Biden supporters to hand-deliver their absentee ballots.

On Wednesday, Vermont Secretary of State Jim Condos took an extraordinary step to set the Supreme Court straight with a letter asking Justice Brett Kavanaugh to correct a recent opinion.

In a court decision on Monday that ruled against allowing ballots to be counted in Wisconsin after Election Day, Kavanaugh wrote a concurring opinion that incorrectly claimed Vermont had not changed its election rules for the unprecedented challenges facing the 2020 election, despite obvious evidence to the contrary.

A total of eight large garbage bags—believed to be filled with undelivered mail—were confiscated from the home of USPS mail carrier, Sean J. Troesch, according to KDKA. Following the raid, the USPS Office of Inspector General confirmed agents had retrieved "several classes of mail," some of which were first class mail pieces.

"Special Agents recovered several different classes of mail, including business mail, flats, and small amount of first class mail. We expect to perform a piece count of the mail tomorrow, and make arrangements to have the mail delivered to customers as soon as feasible," the statement said.

Troesch's neighbors also revealed this was not the first time they had seen a large number of garbage bags in front of the home. Screenshots have also surfaced from a Facebook page belonging to someone who identifies as Sean J. Troesch. Many of the Facebook posts shared on that page highlighted far-right conspiracy theories, per the Pittsburgh City Paper. 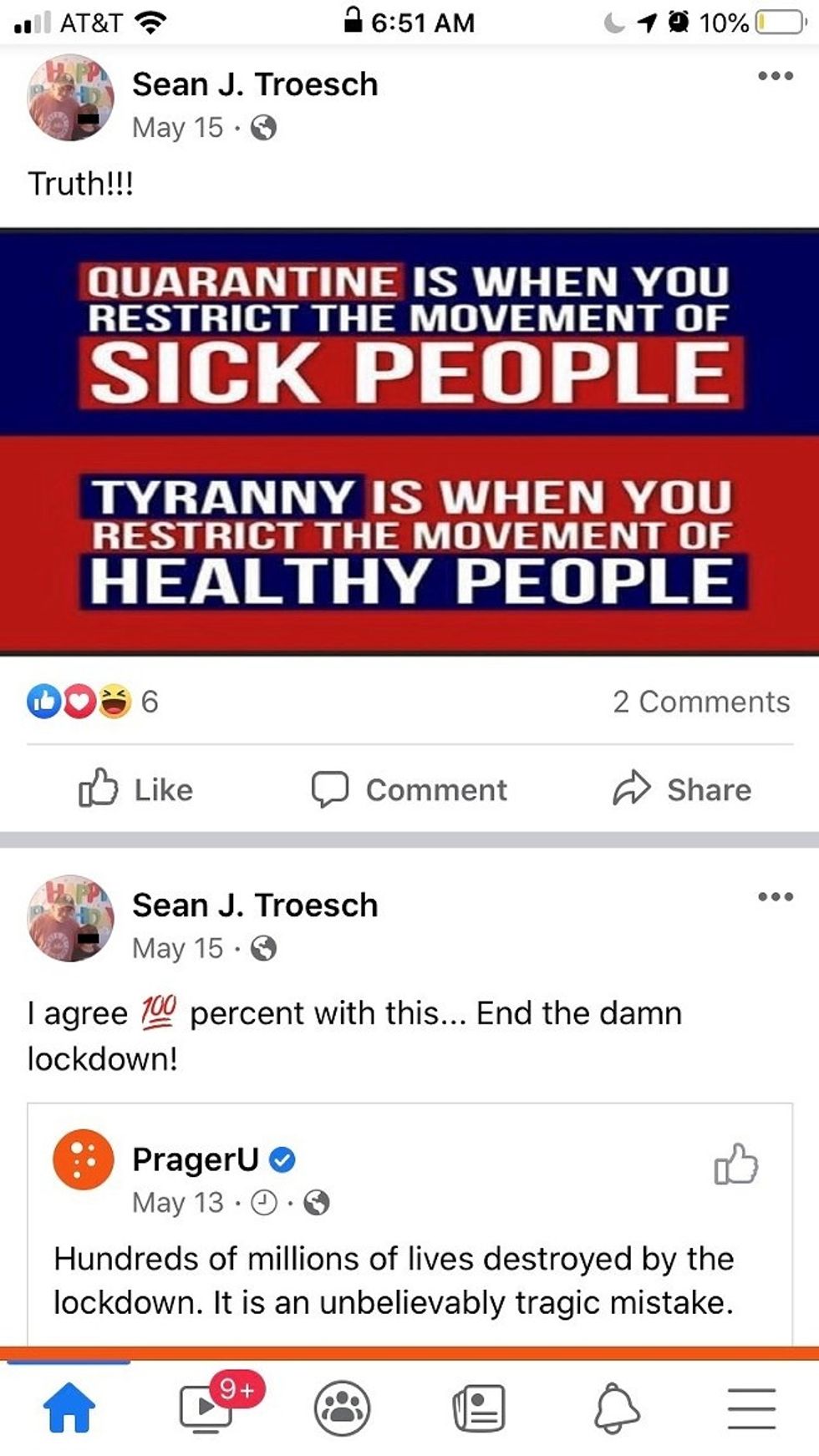 Allegheny County voter registration records also indicate that a Sean J. Troesch resides at the residence that was raided by USPS special agents. The Inspector General office's findings are now being turned over to the Justice Department for a criminal investigation.

No criminal charges have been filed against Troesch yet.

"The Postal Service will have the funding that it needs," McCarthy said, adding, "We will make sure of that." McCarthy claimed Trump would not oppose the funding despite repeated statements by Trump saying he would do just that.

In May, McCarthy voted against a House coronavirus relief bill, the HEROES ACT, that would have provided $25 billion for the post office.

Every now and then, an enormously beneficial soul comes along — someone whose work is so productive, honest and inspirational that he or she ought not be allowed to die. That's how I felt last month when I heard that John Lewis had slipped away from us.

Since the late 1980s, it had been my good fortune to have known, admired and learned from this civil rights icon and U.S. representative from Georgia. Throughout his exemplary life of progressive activism, Lewis hurled his heart, soul, and head (literally!) into fighting the Powers That Be to gain and protect the voting rights of all Americans. As a young movement leader in 1965, he was with Martin Luther King Jr. among the marchers on the front line in Selma, Alabama, who had their heads busted by state troopers for daring to insist that African Americans be allowed to vote.