Some Twitter accounts belonging to white supremacists that were suspended earlier this year have been reinstated and have since gone back to sending out bigoted tweets. Some of the accounts have also been verified again by Twitter.

The Washington Post reported on November 16 that Twitter accounts of prominent so-called “alt-right” white supremacists were suspended following the July barring of Breitbart.com editor Milo Yiannopoulos from Twitter for his harassment campaign against actress Leslie Jones. Included among the suspended accounts, reported the Post, “was the verified account of Richard Spencer,” who the paper previously described “as a leader of the alt-right and ‘one of the most media-savvy thinkers in the movement.’” Twitter had also suspended the accounts of the National Policy Institute, which the Post described as “an alt-right white nationalist think tank of which Spencer is the president,” and that of the Radix Journal, “a magazine run by Spencer.” Other white supremacist accounts such as “Paul Town, Pax Dickinson, Ricky Vaughn, and John Rivers also had their accounts suspended.” [On Twitter, Town complained that to describe him as a white supremacist is “libelous,” claiming that his heritage is “jewish/asian.” Readers of his blog — with a blogroll featuring a link to the “interesting” neo-Nazi Daily Stormer and similar fascist sites — can judge for themselves.]

Spencer’s account was reactivated on December 10. BuzzFeed News reported that Spencer had run afoul of Twitter’s policy against “creating multiple accounts with overlapping use,” and after Spencer selected one account to reactivate, it was turned back on. His account has also been verified. BuzzFeed also noted that Spencer was already “back to form” on Twitter: In addition to Spencer, Paul Town’s Twitter account has also been reinstated, but he has blocked tweets from public view. Ricky Vaughn, who has spoken of his support for creating all-white communities and the shunning of interracial marriages “to maintain our unique culture and racial heritage,” has been actively tweeting again for weeks. Most of his tweets have simply been in support of President-elect Donald Trump, but his account includes several retweets that push fear of Muslim refugees and immigrants, or are supportive of Trump’s liethat thousands of American Muslims celebrated the 9/11 attacks in New Jersey.

As noted by Twitter user Liam Hogan, Twitter has also verified Matthew Heimbach, who the Southern Poverty Law Center described as “the face of a new generation of white nationalists.” 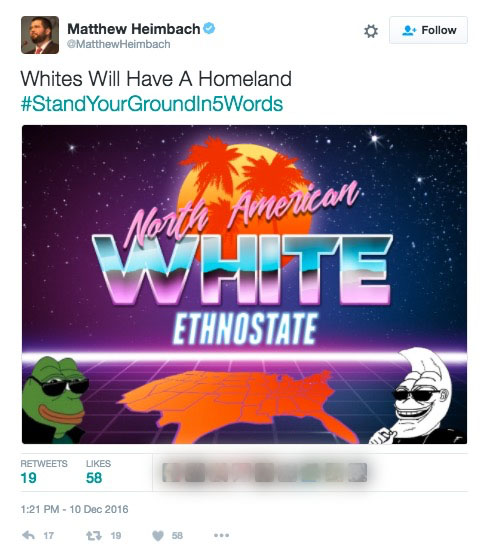 IMAGE: Richard Spencer of the National Policy Institute arrives on campus to speak at an event not sanctioned by the school, at Texas A&M University in College Station, Texas, U.S. December 6, 2016. REUTERS/Spencer Selvidge