Amazon is currently selling multiple books from a neo-Nazi publisher that is associated with a terrorist group. Proceeds from one of the books are going directly to the author, a white nationalist who is in prison for targeting minority-owned organizations.

The two books available for sale, The Movementarian Menace and The Futurist State, are listed as "sold and shipped by Amazon," which reportedly means that they were purchased as inventory by Amazon to be sold and shipped from one of its warehouses. Yet they both appear to violate Amazon's Content Guidelines for Books, which states that the company will not sell "certain content including content that we determine is hate speech," or content that "advocates terrorism." The same guidelines state that the company "invest[s] significant time and resources to enforce these guidelines, using a combination of machine learning, automation, and dedicated teams of human reviewers."

The books feature numerous slurs and smears directed at Jewish, nonwhite, and LGBTQ individuals. The Movementarian Menace makes references to "Jews and other common enemies" and "blacks running rampant in the streets of America and demolishing everything in their path," calling for a "union of white individuals who will come together in blood and spirit to take down an enemy." The Futurist State calls for the murder of LGBTQ people, saying that "the LGBT movement" should be treated as "as an enemy occupation of our lands," adding, "You can't beg your way to power in an occupation, you can only kill your occupiers and take back power." The book makes numerous calls for violence with statements such as, "Through war and violence, we can see the betterment of our race and the proper and healthy growth of our race."

The publisher of the books, the American Futurist, describes itself as seeking "to spread the message and ideas of James Mason" through "the promotion of books, articles and all other forms of media." Mason, a neo-Nazi writer whose work is cited in The Movementarian Menace, is also a major influence behind Atomwaffen Division, a violent white nationalist terrorist group. As noted by the Counter Extremism Project, the American Futurist is associated with Atomwaffen Division (also known as the National Socialist Order) and multiple ex-members of the group have contributed content to American Futurist.

One such contributor is the author of The Movementarian Menace, Vincent Snyder, whose real name, the American Futurist notes, is John Cameron Denton. Denton, himself the former leader of Atomwaffen Division, was sentenced to 41 months in prison in May for taking part in a conspiracy that involved hate crimes targeting a historic African American church, an Islamic Center, and various other minority groups across the United States. 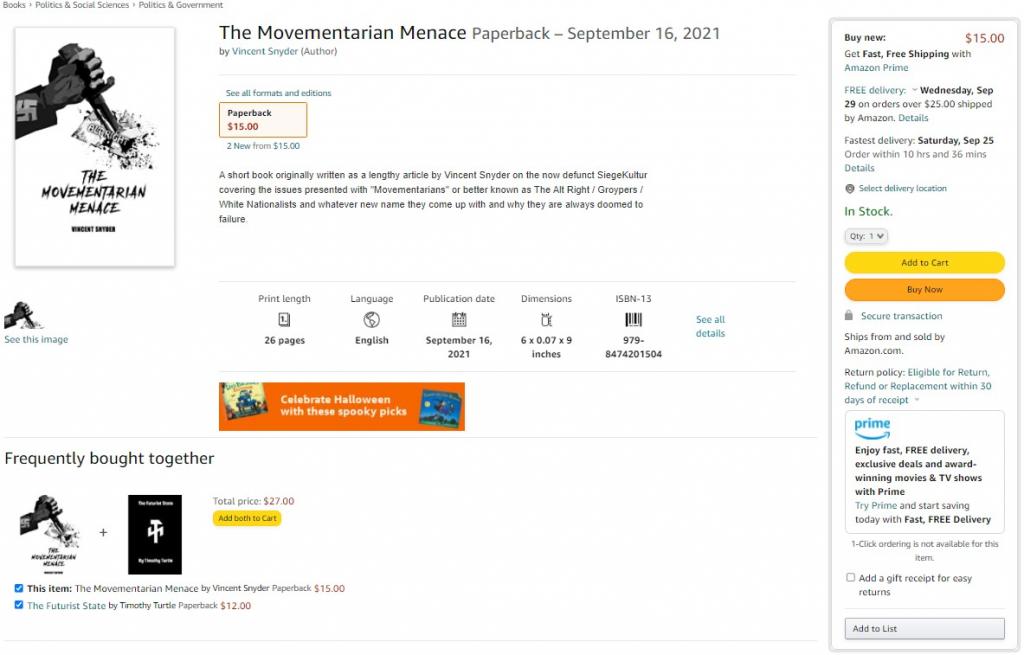 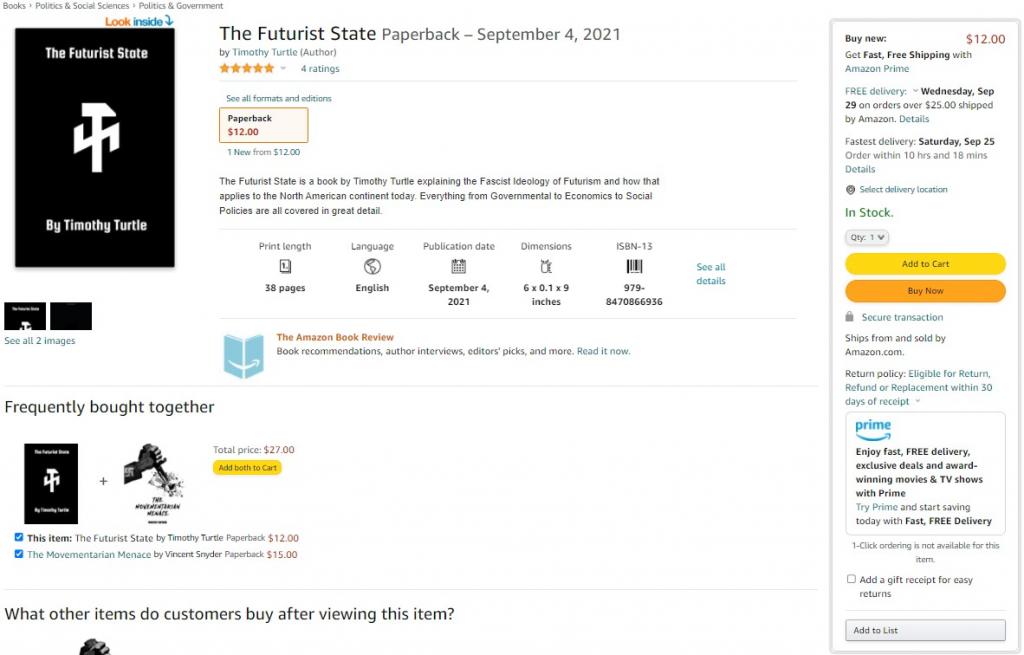 American Futurist states that all proceeds from the sale of Denton's book on Amazon will go to his "prison commissary fund." As Amazon has already purchased the books as part of its inventory, the company has already contributed directly to Denton.

The failure of Amazon's policies seem clear when you recognize that both Denton's book and The Futurist State are currently promoted by Amazon on its list of "new releases in radical political thought," with both books appearing in the top 10 as of September 27. Another book sold by American Futurist, Why We Fight, is listed as "sold out--limited availability." Why We Fight and The Movementarian Menace contain swastikas on their cover, and Why We Fight's listed author is "The Personal Office of The Wehrmacht," all of which should be expected to draw some scrutiny from Amazon at the very least.

Amazon's failure to moderate this content did not go unnoticed by the American Futurist, which, in its posting celebrating the sale of its books on Amazon, wrote, "Obviously these will be taken down sometime in the future by Amazon" but said that "Amazon tends to be pretty slow when taking stuff down and only really takes stuff down if they get pressure from certain people/groups that are higher up the chain." The publisher noted that one of Mason's books remained on Amazon for two months.

Amazon has a responsibility to provide better content moderation for its users, a responsibility it has historically struggled to fulfill. The fact that Amazon sells literature by groups and individuals that promote and engage in violence shows the potentially significant consequences of the tech company profiting off such a large marketplace without effective oversight.

It’s not just the House Select Committee on January 6 that wants a better look at many of those involved in Donald Trump’s scheme to overturn the results of the 2020 election. Thanks to their wide-ranging activities in many states, investigations are going on at the local, state, and federal level into actions that Trump’s team took in attempting to reverse the will of the American people.

No state may have borne more of Trump’s focused fury than Georgia. President Joe Biden carried the state by over 12,500 votes, making it second to Arizona when it comes to the the narrowest margin of victory. This was far outside the realm of possible change that might be addressed by a recount, but Georgia conducted a recount anyway. When that didn’t make things any better for Trump, he requested that Georgia count a third time, which it did. Trump still lost, and by a bigger number than ever.

A Republican House candidate for a competitive seat in northwest Ohio said Monday that mass shootings are an acceptable price to pay for his right to own guns.

"I don't care if countries in Europe have less shootings because they don't have guns. I care about THE UNITED STATES OF AMERICA and OUR 2nd Amendment Rights," Republican J.R. Majewski tweeted Monday evening. "I think Americans stopped caring what Europe thought of our country in 1776."